A moratorium on loan recoveries is supposed to bring distressed farmers a bit of relief. But in the Parakal region of Warangal district, the Andhra Pradesh government's directive has taken farmers from the fire to the frying pan, says one farmer. Kondal Rao has more.

Warangal - Private financiers are adopting new harassment techniques to pressurize the farmers in rural Warangal to secure repayment of their investments. This comes after the state government's announcement of a moratorium on loan recoveries, including loans given by private lenders. The moratorium was announced by the state government led by Chief Minister Y Rajasekhar Reddy, after the entire state received heavy floods and rains in August and September months this year. The postponement of recoveries is to be in force till 2008. The suspension of recovery process usually gets implemented in the national bank network, where the long term loans owed by farmers are adjusted with fresh disbursals from the NABARD funds. 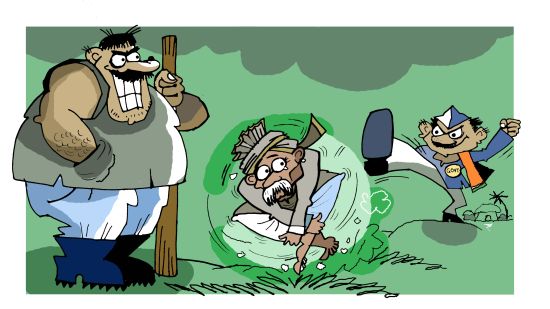 Private financiers are securing the mortgage of lands owned by the borrowers and seeking the fresh agreements with land papers and in some cases they are even resorting to physical attacks to threaten the farmers. The harassment is reaching alarming proportions as the henchmen of certain financiers are warning the farmers not to approach the help-line counters of the state government.

In a recent case, financier Kokkera Rajaveeru, attacked farmer Korem Sanjeeva Reddy of Rayaparthi village in Parakal mandal, and beat him black and blue before tying his neck with a towel to the window of the village school. Reddy had borrowed Rs.2.80 lakhs from the financier three years ago, but he could not repay the amounts in the stipulated period. Rajaveeru never harassed him in the pre-moratorium period. Furthermore, he had had already secured the surrender of four acres land owned by Reddy towards the due of Rs.2 lakhs.

But last month, Reddy was pressurised by the financier to submit the papers of his remaining land towards the pending dues of Rs.80,000. Unable to see a ray of hope, he approached the state government's help-line, a supporting system located in the revenue offices of each revenue mandal. The help-line of Rayaparthi is located in Parakal and it is provided with an office in charge and a communicative system.

This angered Rajaveeru and from then onwards the financier's henchmen started harassing Reddy on one pretext or the other. They even tightened the grip by hinting at other private financiers to not finance him for future farming activity and then set an eye on the banks. According to Reddy, Rajaveeru has also decided to influence the State Bank of Hyderabad, where the Reddy usually gets loans. (The bank has adopted the village for providing the loaning facility.) Their opinion was to create some sort of tension to Reddy family and recover their loan by hook or crook. Reddy approached the local print and electronic media, and explained his tale of woe.

On September 17, Rajaveeru's henchmen beat up Reddy before tying a towel to his neck for securing a signature on the papers mentioning the surrender of his land. Unperturbed, Reddy rejected their demand.

In the Parakal region of Warangal district in particular, such harassments have become common since the moratorium on private lending came into force. Varnam Pratap Reddy of Moranchapalli said that the fresh phase has become a crucial one as the private financiers are tightening their grip on recoveries and preventing others from provide finances to farmers as well. "We are thrown on to the frying pan. Our woes are spiraling now with the increased threats. Help-line could have brought us a ray of hope, but the financiers are choosing new techniques to attack us. This is our sad tale," lamented Joruka Uppalaiah of Regonda mandal.

The financiers of many mandals are acting like liquor mafia and in many cases they are taking away the utensils from the houses to threaten us, said Yadamma, of Jogaiahpalli village in Parakal mandal. Yadamma is a cotton farmer, with about two acres land.

Meanwhile, the Parakal sub division police have launched a search to nab the henchmen of private financier in Parakal region in connection with the Rayaparthi case. Inspector Ravinder Rao says the police were taking every possible step to contain these kinds of harassments, particularly in the wake of the moratorium. He said the police have alerted representatives of local bodies to provide the information to the police in cases where the financiers harass common farmers.

Kondal Rao is a Warangal-based journalist. He covers development issues for Telangana.