A journey of courage

Baby Halder's life is like that of millions of poor, exploited women. What is different, and astoundingly so, is that she has written a book about it - a story which saddens us with its matter-of-fact narrative of a life of tribulation, but also makes us rejoice vicariously in its extraordinary triumph, writes Neeta Deshpande.
29 November 2006 -

"Many days have passed; Only a few remain now." Simple, candid words. Words which say little, yet span a lifetime. It is in these sparing words that sixty-five year old Bai - who was employed to care for me during my childhood - sums up her life of privation and suffering. As a little girl, my days were enlivened by moments with her - listening to her hilarious aphorisms, eating her delicious laddus of leftover rotis, ghee and sugar, and warming myself around her wood fires in the winters.

But despite our close relationship, I am ashamed to admit that I know very little about Bai's life before she moved into our house as a domestic help. Fleeting statements from her have hinted at a childhood of penury, marriage at a precariously early age to an abusive man, an early widowhood, and the hardship which followed. "Listen to me - I have seen it all. I have gone to bed on an empty stomach", she would tell me on rare occasions. Though I wanted to know more, I did not have the courage to ask her to summon up memories of all the sadness she had endured. So when I came across the much acclaimed autobiography of Baby Halder - a domestic worker I gravitated towards it for my own reasons. Perhaps I would find Bai in the book, speaking through the author's voice.

I was not wrong. Baby Halder's life seemed to traverse a similar trajectory to Bai's, or for that matter, millions of poor, exploited women in an India where they are treated as lesser human beings. Victims of an endless cycle of poverty, their needs are routinely ignored, their aspirations systematically thwarted. Like Bai, Baby too was married off at a tender age. Her husband - twice as old as she was then - also turned out to be violent, abusing her verbally and beating her often. Soon, she was forced into a life of drudgery as a domestic worker, her days filled with mindless chores in other people's homes. However, here the similarities end, for Baby Halder, unlike most women of her background, can read and write. Her schooling up to the seventh standard equipped her to recount her life in her Bengali book Aalo Aandhari (Light and Darkness), a story which saddens us with its matter-of-fact narrative of a life of tribulation, but also makes us rejoice vicariously in its extraordinary triumph.

Translated into English as A Life Less Ordinary, Baby's memoir begins like an innocent school essay, interspersed with swirling snowflakes, flowering hills and an occasional, joyous rainbow - elements of her life as a little girl in Dalhousie. However, in tune with her short-lived childhood, these happy reminiscences are numbered as well. For soon, we find her drawing sketches of an often absent, abusive father, and a frustrated mother who abandoned the family, pressing a coin into the four-year-old Baby's palm before walking away. The coin served as an unforgettable memory of a mother whom she saw only years later. She received no love from her step-mother either, who beat her often. 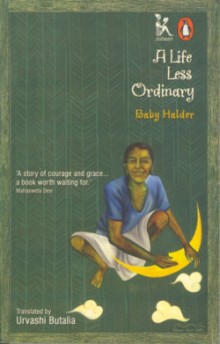 The author looks back on her childhood in these evocative lines, peculiarly written in the third person, perhaps in an effort to distance herself from painful memories. "Poor Baby! What else could one say of her? Imagine a childhood so brief, so ephemeral, that you could sit down and the whole thing could unravel in front of you in barely half an hour! And yet her childhood fascinates Baby. Perhaps everyone is fascinated by the things they've been deprived of, the things they long for. Baby remembers her childhood, she savours every moment of it, she licks it just as a cow would her newborn calf, tasting every part."

However, despite their adverse circumstances, Baby's mother earnestly wanted her to go to school, and her father encouraged her to study. On her part, the little girl loved school as much as she hated home, worked hard, and never missed a day. Her precarious life sowed many hurdles in her schooling, but she persisted and managed to study.

At the naive age of thirteen, Baby was hastily married off to a 26-year-old man, her evanescent childhood relegated to her memories. Soon after she entered her new home, her husband roughly pulled her towards him one night. Little Baby just "shut her eyes and her mouth tightly and let him do what he wanted". At the age of fourteen - a child herself - she had to endure an excruciatingly painful delivery. The poignancy of her state is expressed by an incident during her pregnancy. Tired of staying within the four walls, she would venture out to watch the children at play. She alone knew how desperately she wanted to play with them. One day, when their gulli landed at her feet, she picked it up, and without being fully aware of what she was doing, ran into the field to join them. Only when a woman chided her that she should be careful lest she hurt her stomach, did she run back into the house in embarrassment.

Despite bearing children at a ridiculously young age, Baby clearly understood her responsibilities as a mother. She wanted a good life for her children, including a proper education. According to her, it was not enough to give birth, for parenthood brought with it a responsibility to enable a person to grow into a human being.

These were not mere words; she would soon act on them too. Her husband, who had initially been negligent of her - desisting from answering her queries and even refusing to take her to the hospital in time for her delivery - now turned abusive, and would beat her regularly. One such instance, during her second pregnancy, caused an agonising miscarriage. Eventually, his violence pushed her to the brink of desperation, when she firmly decided to part ways. Soon, she boarded a train for distant Delhi for the sake of her children. Later in a newspaper article, she would explain that she was glad she moved, because there were no good schools for her children back home.

The author looks back on her childhood in evocative lines, peculiarly written in the third person, perhaps in an effort to distance herself from painful memories.

To feed herself and her three little ones, she found work as a domestic help, work which entailed slogging from dawn until midnight. Her employer would shout at Baby's children who would be locked up on the roof all day, and did not even allow her to meet her eldest son who was working and living elsewhere. Fed up with such inhuman treatment, she left, and by a stroke of serendipity found a new employer - one who would transform her life in unimaginable ways.

Baby's new 'Sahib', former professor of anthropology Prabodh Kumar, whom she would later call 'Tatush' - the name that his sons used for him - helped her in more ways than one. He provided her a room when her house was broken down by bulldozers, reunited her with her eldest son, found a school for her children, and supplied them with the necessities of life. But over and above all his help, he would talk to her, asking her to think of him as a "father, brother, mother, friend ..." Baby was touched when he treated her as a human being, given that most people behave callously towards servants and pay them precious little - the employers taking advantage of the desperation of domestic workers to subsidise their own lives.

His most significant contribution to her life, however, enabled her to transgress the boundaries drawn around her, bringing forth an aspect of her personality that she would never have been aware of. After he saw her peering at a Bengali book while she dusted his bookshelves, he asked if she could read. The next day, he pulled out a book for her, and asked her to read out its name. With his encouragement, she blurted out Amar Meyebela, the first book she read on her way to writing one herself. When he found her making progress with reading the book, he provided her a notebook and pen, and prodded her to write the story of her life. The astonishing result - Aalo Aandhari - is her story of darkness and light, the travails and joys in a journey of courage.

Baby's book is peppered with her thoughts on various aspects of her life, including the size of her family and the education of her children. Upon realizing that she might be following the 'local custom' in her neighbourhood of three to four children per couple, she had the foresight to undergo a family planning operation after her third issue. Her views on the status of women and the discrimination they face are also worth noting. When her husband turned the house into a dirty, horrible mess whenever she was away, she questioned a neighbour as to why the woman of the house had to be around to keep the place clean.

Now writing her second book, Baby told a newspaper that in her autobiography, she simply wrote about all that she had faced. This time, she would be more analytical and try to find out why she was put in those situations in the first place.

The people behind the book must be congratulated for bringing out this unusual life-story of a person who would otherwise have been relegated to the background of her employers' houses, condemned to a furtive, silent existence. Prabodh Kumar translated the manuscript from the original Bengali into Hindi, cleaning it up as required, but leaving Baby's own voice intact. Publisher and writer Urvashi Butalia of Zubaan translated the narrative from Hindi into English.

While reading the book, one is struck by Baby's courage to resolutely live as a single woman with three children in faraway, unfamiliar Delhi, where she painstakingly carved out a new life for herself. Though she does not ask uncomfortable questions of her readers, the mere narration of her life leaves us to ponder why she should have had to suffer through the ordeals of a child marriage, an abusive husband and exploitative employers.

Though this is not a book to be read for its literary merit, it should be valued for its powerful story of survival and success in the face of relentless, overwhelming odds - a story which will remain etched on our minds for its author's grit and determination to refuse to accept defeat. This down-to-earth memoir stirs and delights, saddens and overpowers, humbles and uplifts us with its direct, unpretentious take on the universal experience of being human.

Neeta Deshpande is a student of Hindustani vocal music based in Goa. A Life Less Ordinary