Iftikhar Gilani's ordeal as an unfairly prosecuted victim of the Official Secrets Act is now behind him, but his record of his experience, published in his book My Days in Prison, reminds us there are many others battling the same harsh treatment under the archaic and oppressive law. Deepa A reports.
14 July 2005 -

When Iftikhar Gilani speaks of those who conspired to put him behind bars for no good reason, his voice does not betray any anger. Instead, the mild-mannered journalist lets facts do the talking, a reportage style mirrored in his recently released book My Days in Prison. The 148-page book is a searing account of the failure of the agencies whose job it is to uphold Indian democracy. Indeed, the slim volume narrates a terrifying tale of how, in a country where the freedom of speech and expression is guaranteed, authorities have the power to upturn lives in the matter of a day without an iota of evidence - as they did to Gilani.

In June 2002, Gilani was arrested under the Official Secrets Act (OSA) for possessing a paper published by the Institute of Strategic Studies, Islamabad, detailing among other things, the deployment of Indian troops in Indian-held Kashmir. The document was anything but classified: it was available on the Internet, and moreover, as it had originated in Pakistan, it clearly didn't qualify as an 'official secret' of the Indian government. Yet, evidence was fabricated - Intelligence Bureau officials altered the words 'Indian-held Kashmir' in the document to 'Jammu and Kashmir' to suggest it was an Indian document - to make a false case against the journalist. He was detained in Tihar jail till January 2003, when the government withdrew the case against him. 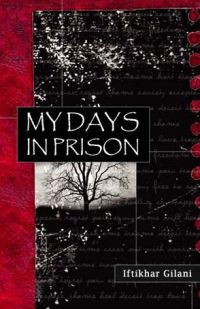 Over two years down the line, Gilani, who heads the New Delhi bureau of the Kashmir Times, says his life is back on track. "It wouldn't have been easy for anyone else," he says during an interview in his house in Delhi. "My organisation backed me during the case, my friends in the media supported me." His family too has managed to settle down after the "dramatic" seven months, when they were ostracised in the neighbourhood. "My wife used to chat with other women in the colonies in the evenings, but they stopped talking to her when I was in prison. When my four-year-old daughter went out to play, people would lock up their children in their houses," he recalls.

His own experiences were scarcely any better. As he recounts in the book, other prisoners in the jail looked down on him as an "anti-national". "There were people who had been imprisoned for rape, and they would look at me and say, 'You raped Bharatmata'," says Gilani. In the prison, it was like being back "in the medieval age". Only the television set in the ward reminded him that it was the 21st century. He witnessed beatings; he worked as a construction labourer for 40 days; during his first few days in jail, he was made to clean toilets with his shirt and wear the same shirt for three days. Even a simple matter such as obtaining toothpaste took weeks, and a diary he tried to keep in prison was confiscated thrice, after which he abandoned the attempt.

Yet, Gilani doesn't sound bitter as he relives those nightmarish times. When asked about compensation from authorities for the suffering he endured, he says: "Freedom itself is my greatest compensation, it is to anyone who has been in jail." But on the negative side, there is the knowledge that many who were wrongly detained in the jail under the OSA are still languishing there. In Gilani's case, friends in the media took up the case with politicians. Even then, "it took seven months for me to be released," he says. Several others are not so lucky. "In fact, I told L.K. Advani (the then Union home minister) that my biggest compensation would be if other OSA cases are reviewed," he adds.

"The OSA was enacted by the British in 1923," points out Gilani. "It's an archaic Act, with no clear definition of what a 'secret' is. In Britain, it was repealed in 1989, and they now have an entirely different law. It should be scrapped in India." The journalist isn't the first - or possibly the last - unfortunate casualty of the Act. "There was a case of a Parliament employee who was charged under the OSA for having budget papers. Another person was in jail under the Act for having an Air Traffic Control route of planes, for 1987-88. What relevance did those routes have in 2002, after so many private airlines had been introduced?" wonders Gilani.

"The OSA was enacted by the British in 1923," points out Gilani. "It's an archaic Act, with no clear definition of what a 'secret' is. In Britain, it was repealed in 1989, and they now have an entirely different law. It should be scrapped in India."

His book lists similar cases of those charged under the Act: a carpenter with the army, who had a scuffle with an Intelligence Bureau (IB) official while boarding a bus in Delhi; a retired Border Roads Organisation employee, arrested on charges that he had a map of the Jawahar Tunnel on National Highway 1 between Jammu and Kashmir (the charge-sheet against the employee said 'the secret document' was a brochure of Bharat Heavy Electricals Ltd); and many others for possessing maps of certain areas. As Gilani questions in the book, it's unclear what military value an "out-of-scale" map, with relatively few details, would have in the age of satellite imagery.

If the usage of OSA is sometimes arbitrary, the lack of action against officials who misuse the Act makes it worse. "Every law has a clause saying that if officials act in 'good faith', then it's alright," says Gilani. "With such a clause, it's impossible to bring anyone to book, as officials can always invoke it." In his case, the IB officials who fabricated evidence were given "prized United Nations postings in Kosovo", he mentions with a bemused smile.

Even the National Human Rights Commission's (NHRC) hands are tied when it comes to directing the government to take action against erring officials. "The NHRC can't prosecute officers and send them to jail," says Gilani. The Commission had asked the Kerala government to pay one million rupees to the Indian Space Research Organisation scientist S Nambinarayanan - who was arrested under the OSA - as compensation for violation of human rights. But, the NHRC's orders are often not implemented and challenged in court by the government, thereby ensuring at least long-drawn delays.

Moreover, the judiciary can take 'extreme views', says Gilani. As he details in the book, his statements that the supposedly-secret document in his possession was in fact a published one were not recorded. When his counsel told the court that they could show that the document was on the Internet, the judge agreed, but refused to allow them to use the telephone line in the chamber to connect to the Net.

While India does have systems in place to ensure justice, accountability is lacking, says Gilani. Moreover, the backlog of cases in the courts means justice is inevitably delayed. "In Tihar, I met an undertrial, accused of murder, who'd been in jail for 16 years. Even those convicted of crimes get out of jail within 14 years," he adds.

If the judiciary doesn't have the resources to move on the fast track, this is clearly a problem that the media - expected to play the part of the society's watchdog - does not face. "Many newspapers splashed stories about me without verification. There were reports that Rs 70 crores was stashed in my house, while all that was found was Rs 3,250," says Gilani. Some newspapers went to ridiculous lengths to establish that the journalist was a spy. A Hindi newspaper reporter interviewed the neighbourhood dhobi (washerman, in this case someone who also irons clothes) for an article which quoted the dhobi as saying that lights were on in Gilani's study till late in the night. This, apparently, could be extrapolated to conclude that the journalist was indulging in suspicious activities. In his book, Gilani points out the dangers inherent in such crime reporting, when articles presenting only the police version are published, while the other side goes unrepresented. Police officials often use this loophole to plant stories that could make their case strong in court, he adds.

Today, Gilani is trying to put this nightmarish period of his life behind him. My Days in Prison, however, has left an indelible question mark on the processes of law and justice that India is otherwise proud of. It's a question that clearly deserves to be addressed and answered.

Deepa A is a New Delhi-based journalist. Iftikhar Gilani's book, My Days in Prison, is published by Penguin (Rs.195), and available in bookshops.