Grand plans for the Ganga

The World Bank and the Government have developed an extensive program of redevelopment for the Ganga basin, but thus far the scheme remains devoid of people's participation. Shripad Dharmadhikary reports.
09 February 2011 -

When the President of the World Bank Group Robert B Zoellick visited India in mid-January, one of the highlights of his visit was a meeting with Minister for Environment and State Jairam Ramesh, where an agreement was reached to "deepen cooperation on India's green growth agenda." Several areas were identified where the Bank would provide financial support over the next two years in addition to what it has already committed. By far the biggest of this is the National Ganga Project, with the Bank promising a sum of US $1 billion - close to Rs.4700 crores.

The World Bank's Ganga project is essentially a part-implementation of the highly ambitious program of the Government of India's National Ganga River Basin Authority (NGRBA). This body was set up in February 2009 with an objective to "to ensure effective abatement of pollution and conservation of the river Ganga by adopting a river basin approach for comprehensive planning and management." Given the length and catchment of the Ganga, its economic, social, religious and cultural importance, and its vast diversity from the high Himalayan mountains to the plains, the objective is massive in scope.

The NGRBA is important for several reasons. First of all, the sheer size of the area and population that will be involved - the Ganga traverses 2500 kms in India and its basin accounts for 26 per cent of the country's landmass, 30 per cent of water and 40 per cent of the population. Further, the NGRBA comes against the background of a similarly ambitious Ganga Action Plan (GAP) with a similar objective of cleaning the Ganga, that was launched in 1985. That effort is widely perceived to have failed to meet its objectives, even though it was extended to other rivers as GAP-II and also through the National River Conservation Plan. Naturally therefore, there are concerns about the new initiative meeting the same fate.

Thirdly, the NGRBA has projected itself to be much more than a mere pollution control exercise, and has adopted the River Basin Planning approach as the central framework. This makes it all the more significant.

Like the GAP, the NGRBA too is a top-down effort. This will no doubt be the determining factor in how effective it is. However, within the limitations of this structure, there are certain strengths to the initiative. First of all, its Apex Council packs a political punch, with the Prime Minster heading it, and members including several Union ministers like Finance, Environment, Power, Water resources, and Chief Ministers of the five states of Uttarakhand, UP, Bihar, Jharkhand and West Bengal. It also includes highly respected civil society members like Sunita Narain, Rajendra Singh, Ravi Chopra and others.

The NGRBA has also roped in seven IITs (Indian Institutes of Technology) to help it develop the Ganga River Basin Management plan. The Memorandum of Agreement signed with a consortium of 7 IITs indicates at least an intention to consider a framework that goes beyond pollution. The Basin Management Plan to be prepared by the IITs will aim to provide for water and energy needs even while protecting the fundamental aspects of the river. These fundamental aspects have been specifically noted to include:

The NGBRA has also made a good beginning by deciding last year to scrap three hydropower projects on the Bhagirathi - the 381 MW Bhaironghati, the 480 MW Pala Maneri and the under-construction 600 MW Loharinag Pala - and declaring a 135-km stretch of the river as eco-senstitive.

However, these strengths themselves have another side that raises important concerns. These and other concerns outweigh and cast serious doubts about the efficacy of the initiative.

The most critical aspect is the top-down structure. River basin planning in the real sense requires a bottom up approach with wide spread and deep rooted participation from the people, starting with at the sub-basin level. These sub-basin plans would then be integrated into a basin level plan. The objectives of the program themselves need to evolve from this process, as also the specific details of the program like what developmental activities can and need to be taken up, whose needs are to be prioritised and so on. Here, the whole logic is being turned upside down, with the planning being done from top down. 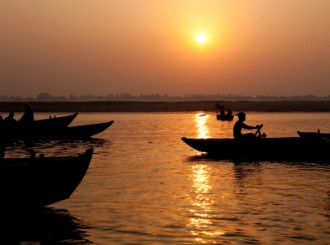 The involvement of the World Bank increases apprehensions of the whole program becoming a technocratic-bureaucratic, consultant-driven project. (Above: The sun rises over the Ganga at Varanasi).

In the case of the NGRBA, there seem to be little sign of this participatory process. While the IITs may bring in technical and technological competence to the planning process, there is no indication that they are planning on carrying out any bottom-up process to develop the Basin Plan. Thus, the biggest concern is that the people of the basin may be delivered a ready-made Basin Plan, a contradiction in terms. The study website indicate that social, economic, cultural, ecological, policy, law and governance aspects will be included, but neither this nor "consultation" can be a replacement for a participatory planning process.

Secondly, the early initiative of the NGRBA of scrapping three hydel projects may be a good signal, but only if it indicates a future approach to issues raised by such projects. However, the scrapping has come only under pressure from struggles and movements, and it is a limited gesture as other projects in the basin with similar impacts continue without any action. In other words, this action does not signal a consistent approach, but smacks of tokenism or responding only to pressure.

The involvement of the World Bank is another factor that increases apprehensions of the whole program becoming a technocratic-bureaucratic, consultant-driven project. First of all, the major focus of the World Bank project is capital investments for sewage treatment and other infrastructure. Close to 80 per cent - about Rs.3800 crores - of the project loan is to go for this.

Secondly, much of this infrastructure spending is to be routed through Public Private Partnerships or PPPs. These PPPs are nothing but privatisation by another name. The experience of such projects in India has thrown up many serious questions, including the dangers of profit maximisation taking precedence over other concerns and inability of such projects to meet social objectives. Such privatisation can also deter public participation, which is key to ensuring that the Ganga is not polluted.

Moreover, much of the remaining money will go for institution development, capacity building and skill development of the implementing agencies and regulators. However, as the experience of GAP and other similar projects have shown, the persistence of pollution is not really due to lack of technology or infrastructure or institutional capacity. While these are important, in the Indian scenario, the critical factors are the general ethos, the lack of accountability in regulatory and administrative agencies and the absence of political will in the Government and administration. Unless these are addressed, pouring in massive amounts of money, and privatisation may actually worsen the situation.

The just-released Environmental and Social Analysis of the project prepared by TERI for the World Bank captures a crucial part of the problem when it points out that "It is an ambitious objective to maintain or restore all natural water bodies to a pristine level. Planning pollution control activities to attain such a goal is bound to be a deterrent to developmental activities and cost prohibitive."

This implies that developmental activities will cause pollution - not just contamination but also other adverse impacts on the environment. Thus, the first challenge for the NGRBA is to ensure that such development as causes pollution benefits the poor as a priority. Much of today's development programs that lead to pollution tend to privilege the needs of the elite and powerful at the cost of the livelihoods of the poor. Hydropower dams that destroy fisheries are a good example. The second challenge is to shift the developmental activities to minimise pollution, so that the Ganga remains aviral and nirmal, if not pristine, even while continuing to maintain the poor as the first beneficiaries.

The third challenge is infusing enthusiasm and mobilising the masses towards these goals, for without this, the program is bound to fail. This can happen only when the Ganga program evolves from and is run on a truly and widely participative basis. Given the current structure of the NGRBA, the last probably will be its biggest challenge and the toughest test of its performance.