Oil subsidy is all gas

Far from subsidising the public, governments made the aam admi bear a substantial part of their expenditure on the production and sale of fuels, writes Kannan Kasturi.
04 December 2011 -

The government periodically puts out data on the quantum of 'under-recoveries' by the public sector refiners and distributors of petroleum products - Indian Oil (IOCL), Bharat Petroleum (BPCL) and Hindustan Petroleum (HPCL) - on the sale of diesel, kerosene, and LPG. The exercise is calculated to prepare public opinion to accept higher prices.

Mainstream media often uncritically reports the 'under-recoveries' as the 'loss' suffered by these oil marketing companies (OMCs) or as the 'subsidy' that must be provided by the government to make up the loss. Such an interpretation, though natural, turns out to be quite off the mark.

The government measures 'under-recovery' as the loss an OMC would make if it imported a petroleum product, say diesel, from the international market and after paying ocean freight, import charges and customs duty and incurring inland transport and marketing costs, sold the product to a dealer at the government specified price. It is a notional loss, for it is unrelated to the actual process by which oil companies make diesel available in the Indian market - by refining imported and domestic crude in Indian refineries. It is also an exaggerated loss.

Price differentials in the international market between a refined product and crude oil reflect the product specific demand-supply equation rather than the inherent cost of producing the product. Shortage of refining capacity for a particular product - real or artificially created - pushes the differential up.

If 'under-recovery' is not the loss of the OMCs, how much are they actually losing, and what is the extent of the 'subsidy' that the government has to extend to them? A look at last year's (2010-11) consolidated results of the three companies provides some surprises. All three showed profits, paid income tax, and declared dividends. The Government provided support to these companies under two heads - a fixed amount for each liter of kerosene and cylinder of LPG sold, and a discretionary grant announced quarterly. The aggregate amount is presented in the table as subsidy.

Each of the three oil companies paid more excise to the government than it received as subsidy. In effect, the government returned a portion of the taxes it collected on petroleum products from the OMCs. 'Subsidy', considered in this light, appears to be a tax concession by another name, not very different from the 'fiscal stimulus' the government extends to an industrial sector when it is in trouble.

The OMCs showed a large loss in the first half of 2011-12 and this tells its own story. We will return to this a little later.

Who benefits from Indian crude?

Leaving refining costs and taxes aside, the price of petroleum products is determined by the price of crude oil. The Government's economists would have us believe that this is completely outside its control.

The fact is that a significant quantity of crude oil is produced in India, sufficient to meet one third of the crude oil requirements of the public sector oil refiners for products for the Indian market. The public sector producers - ONGC, GAIL, and Oil India - account for nearly 75 per cent of this oil, while the rest comes from Reliance, Cairn and other private producers. The locally produced crude could be priced to moderate petroleum product prices for the Indian consumer. Alternatively, revenues derived from local production could be used for this purpose. The government's economic philosophy however dictates otherwise. 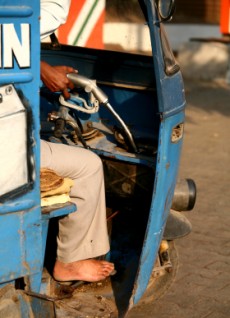 The government's calculation of 'under-recovery' assumes a fat refining margin, which is much higher than the true cost borne by the OMCs. As a result, there is no real 'loss', only costs - and these are covered by consumer.

Private oil producers get rights to oil fields after signing production-sharing contracts with the government. These contracts mandate selling oil to Indian refiners at no less than the prevailing international prices. The contracts are structured such that government's share of production will increase if the producers get a higher price for the oil. While providing the government with another source of revenue, these contracts, by locking Indian oil produce to international prices, ensure that the Indian public does not enjoy the benefits of local production.

The government treats the public sector oil producers somewhat differently, based on historical imperatives. They must sell their oil at a 'discount' to international prices to the public sector refiners. The 'discount', however, is not tied to the rise in international prices or the windfall profits made when this happens; it is fixed every quarter, at the government's discretion.

The 2011-12 first half results of the OMC's provide insights into how the government uses its discretion on 'subsidies' and 'discounts'.

The oil companies together showed second quarter (Q2) losses of about Rs.14,000 crores, on the backs of first quarter (Q1) losses of about Rs.9000 crores. The government delayed announcing the Q2 'subsidy', which, had it been timely, would have allowed the OMCs to show a small profit for the quarter instead of a large loss. The Q1 'subsidy' announcement was not followed up with cash, forcing the OMCs to borrow from banks and pay high interest charges to finance crude oil imports. The public sector oil producers provided sharply lower 'discounts' to the OMCs on crude oil price in Q2 compared to Q1 and showed sharply climbing profits.

One is left with the strong suspicion that these moves were orchestrated to make a strong case for increasing retail petroleum prices as well as to make government's planned disinvestment in ONGC and OIL more attractive.

The central government has several revenue streams from petroleum products collected at different stages of processing. At the crude oil stage, it collects royalty, a share of the production (from private producers), and excise on oil produced and customs duty on the oil imported. At the refining stage, it collects excise on the refined products such as diesel and petrol. Oil producers, refiners and marketers also contribute to the central exchequer by way of taxes on their profits, dividends and tax on the dividends. State governments collect royalty on crude oil and sales tax on petroleum products. Sales tax rates range from 18-25 per cent on diesel and 19-33 per cent on petrol, with a few exceptions.

Last year, the central government's income from the public sector oil & gas producers, refiners and marketers alone was in excess of Rs.100,000 crores, eclipsing the 'subsidy' it provided. State governments were not far behind, collecting over Rs.80,000 crores. Taxes on petroleum products add to the cost of all goods and services and reflect in their prices. Far from subsidising the public, governments made the aam admi bear a substantial part of their expenditure.