Plenty on the roof

Rainwater harvesting isn't just to overcome shortages in piped supply, sometimes there is so much to tap overhead that no other source is needed. And some of the regular sources can even be loaned out to others! Shree Padre visits a District Panchayat Office in Kerala that has discovered this.
09 August 2005 -

This three-storey government office doesn't depend on bore wells, pipe water or even groundwater; instead, here in Kasaragod, Kerala, the District Panchayat Office simply puts its faith in rainwater. And thus far, there is plenty of evidence that all the water it needs can be simply obtained by catching it off the roof! According to the officials here, Kasaragod is the only DPO in the state that has gone for catching and using rain in a big way. And at the time of commissioning, this system was claimed to be largest one used by a government department.

The office, situated next to District Collector's Office in Kasaragod, has about 100 staff members. Everyday, more than 100 visitors use the toilets. Earlier, the office depended on a dug-well and a bore well. While the former used to dry in early summer, the latter wasn't providing sufficient yield. The office of the Swajaldhara II Project is housed in the same building. A couple of years ago, nobody was keen on RWH in the district. A live model had to be created to convince people about this technique. Naturally, the concerned official wondered, 'why not try it here at the DPO itself '?

"We weren't aware of the concept of Rainwater Harvesting before implementing it here. Now all our staff are so convinced that they approach me asking whether there is some scheme under which they can have a RWH system at their home", recalls Smt. E. Padmavathy, District Panchayath President. "Before implementing this, we had experienced a lot of problems getting water. Our toilets were stinking." Not anymore. 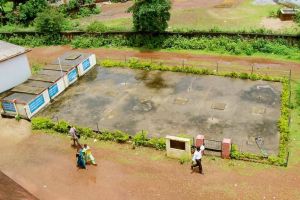 The storage tank has a capacity of 4.25 lakh litres. [Picture: Shree Padre]

The building has a roof area of 560 square metres. With an annual average rainfall of 3,500 millimeters, this is enough area to get 19.5 lakh litres of water. After deducting evaporation and other losses, at least 15 lakh litres could still be harvested. Swajaladhara assessed that about 6 lakh litres would be adequate to meet the DPO's water requirements for the whole year; since rainfall is distributed around the year, a tank with a capacity of 4.25 lakh litres would be enough to meet the needs of the office. All the down-pipes from the roof were inter-connected. After good filtration, this water is fed into an underground tank. From there it is pumped to the overhead tank with a 0.5 HP motor. The overflow is used for recharging the open well as well as a tube well. The total financial allocation for the project was Rs.4.25 lakh. But the whole thing was completed with Rs.35,000 to spare!

Today, no staff member brings drinking water from their home. For safety, the rainwater is boiled before drinking. Asked whether anybody has inhibitions over drinking this water, the team leader of Swajaladhara, K. T. Balabhaskaran, says, "Absolutely no. Look here, the coffee you drank just now is made by our staff from the same water." Adds Padmavathy, "During the three summer months, we get brackish water in our pipes at home. and so during that time, everyday I take 10-15 litres of water home for our family of five. This takes care of our cooking and drinking needs. "

Confident that rain stored in the system will last until the end of summer, the DPO last year loaned its borewell to the canteen. In just one year, the dug-well nearby has been recharged considerably. From March to May, on alternate days, water was pumped from this dug-well to the overhead tank. Despite this, it hasn't dried up. Just before the monsoon, there were still two metres of water in it. Fifty infiltration pits around the well catch the run-off from the ground; the overflow from the underground storage is also partly retrieved this way.

"The success of this initial project gave a lot of confidence to me and our team", Balabhaskaran reminisces, "I had neither drunk rainwater, nor had first-hand experience of RWH earlier. I was an officer in the Kerala State Backward Classes Development Corporation, and was dealing with financial matters, you see," he explains.

The success story is attracting study teams from far and near. Apart from the Planning Board member Shri C. P. John, and students from Kollam College, it has received groups from Maharashtra and Uttaranchal. Hundreds of visitors who visit the DC's office and DPO everyday get to see the rainwater tank. The local press has given plenty of exposure to this successful project.

But not everyone knows the full story. While most people are impressed at the efforts, they don't know that rainwater is the only source on which the DPO now depends, for all its water requirements. That's not just prudent collection, but much more impressive. If the Swajaladhara office or any other agency could put across this message more effectively, that would further help in spreading awareness about water harvesting.

In neighbouring Karnataka, the state administration is gearing up for RWH implementation through its City Corporations and Jilla (District) Panchayats. Lot of people in the state are still not convinced that roofs alone can tap considerable water, and that this can be used for drinking too. Such doubting Thomases might consider a visit to Kasaragod, to join a long line of others who came with one kind of disbelief and left with another.