Despite its apparent focus on middle class insensitivity to the conditions of the working poor, At My Doorstep makes a more important contribution in depicting experiences of male powerlessness. Romit Chowdhury reviews the film.
19 January 2010 -

A man in his early 20s struggles with a large waste tub down the stairs of a building, colleting garbage at every door step. At one door he is reprimanded by a resident for shirking at his job. When the young man protests, telling her about the sheer weight of the load he has to daily carry, the woman asks him to employ help. She registers complete incredulity when she is told that he earns merely Rs.2000 a month and cannot afford a helping hand. The screen fades to night, decorated by the shimmer of lights emanating from flats in a multi-storied housing cooperative.

A recent National Sample Survey Organization report suggests that approximately 93 per cent of the labour force in India is in the informal sector. At the time of the 2001 census, in Mumbai more than 70 per cent of the city's work force was in the unorganized sector. These statistics are not new. Interactions with domestic workers, delivery persons of countless everyday essentials, security guards and construction workers, are familiar episodes in our middle class lives. What is easily forgotten is that for the majority of the people in this country, employment security, defined working hours and adequate compensation remain elusive certitudes of a long promised land.

"It is this immunity of the middle-class to numbers and images of poverty that I wanted to unsettle," said Nishtha Jain at a screening of her latest documentary film At My Doorstep in Alliance Francaise, Mumbai. The ways in which the filmmaker has chosen to marshal this intent in her film throw up important questions about the lives of the invisible people who visit our doorsteps everyday, and propel the working of the city's economy.

Given the inherently unequal relationship between filmmaker and subject, between the one who represents and those who are portrayed, the issue of representing the 'other' is always enmeshed in circuits of power. Nishtha Jain tackles this difficult question by delegating an aspect of the task of representation to one of the security guards who she includes in her film. Dayanand, who is also a writer, tells the filmmaker how he wants to be represented in her film - as a poet, who through many hardships is charting the course of his life. The story of this security person, told through one of his autobiographical creative endeavours, forms one narrative stream of At My Doorstep.

Dayanand tells us that like countless others, he came to Mumbai from Bokaro, Jharkhand, in search of a job. His first day in the famed city of dreams, however, is quite unlike familiar images of heroic arrival in Bollywood. Arrested for traveling by the local train with a wrong ticket, Dayanand spends his very first night in the city in lockup. Thereafter, he takes up a job as a security guard in one of Mumbai's many multi-storied buildings; but the job pays poorly and he is unable to support his wife and daughter in the city.

Ultimately, he is compelled to send his family back to his village. Dayanand is consumed with a despairing sense of his failure as he finds himself without the means to gift even one rupee to his daughter when he bids farewell to her at the station.

It is in depicting these experiences of male powerlessness that At My Doorstep makes an important contribution. The film explores the impact of poor employment and long-term economic marginality on the making of working-class masculinities. The agency which Dayanand works for may christen him and his co-workers Tuff but like the young man in the film who goes from door to door collecting garbage, they live with a debilitating awareness of their failure to do what society expects from men - provide. 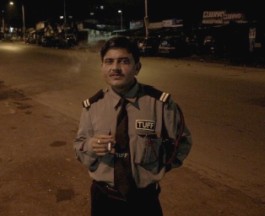 Dayanand and his co-workers live with a debilitating awareness of their failure to do what society expects from men - provide.

•  The elephant in your bedroom
•  Invisible women

It is precisely this inability to garner the economic benefits that accrue to men in employment, and earn adequately to support their families that has thrown their gender identities into crisis. Like Sonu, who also works as a security guard, these men are powerless to react to the exploitation they face from their employers. Besides keeping gate, Sonu has to ensure that the overhead tanks of the buildings are filled to the brim. This additional task requires him to wait at length on the terrace, even during the monsoon, without raincoat or umbrella. We are told that repeated requests for protection against the elements have fallen on deaf ears.

In this way, Sonu and his colleagues become the very embodiment of the Marxian notion of abstract labour, a monotonous productive force that is no different from the labour that anyone can perform. The result is that since they have no 'special skill' to demonstrate, and are unprotected by labour laws, they are most vulnerable to exploitation in the labour market. This economic and cultural weakness that emerges from their class deprivation reinstates for them their inability to measure up to the cultural ideals of masculine behaviour.

Their way of coping with this crisis, as one of the men who earns by ironing clothes says, is by assuming a philosophical pragmatism - wife, family, kids all come at a price, so there is little else to do save earn as much as possible, we are told. Dayanand pledges to continue writing even in the face of the greatest hardship.

Whose city, housing for whom?

By portraying the lives of people who earn their living by guarding multi-storied buildings, ironing clothes or collecting garbage from door to door, Nishtha Jain articulates a critique of the Beijing and Shanghai model of development that Mumbai seems to be following. Through subtle symbolism, like the scene which shows a young delivery boy gazing hopefully at a kite blowing in the wind, or the one where a group of children are playing in a housing compound as he carries his daily load of clothes to their respective flats, the filmmaker demonstrates how the city allows only a certain section of society the luxury to dream.

The scene which shows residents of a posh housing cooperative celebrating Independence Day, as Sonu gets busy serving food, is finely ironical because the film has shown us how people in the unorganised sector are forced to live in slums without even the most basic of civic amenities. Significantly, the film lays open the economy of housing patterns in the city. Given the meager incomes of those working in the informal economy, the low-cost slum housing becomes a perfect fit with their profiles.

Conversely, the cheap labour that these people provide to the market which drives the city is made possible in part by their cheap housing - most of them walk to work. For others like the men who iron clothes, their place of work is also their home. It is in these ways that slums are used to counter the economies of urban market and labour.

The question of middle-class complacency

How far is the film successful in unsettling the anesthesia of the middle class to those living on the fringes of a metropolitan existence? The film does raise a number of important questions about the condition of those without whom our middle class lives would be dysfunctional. Nonetheless, it offers no fresh insight. It sticks to the dominant conception of the middle class as uniformly indifferent, minus the few who choose to make films or write about the lives of the poor.

The difficulty with visual documentations which proceed along clear-cut division between 'oppressor' and 'oppressed' is that viewers, generally already aware of the issues being portrayed, are able to absolve themselves from occupying either category and thereby position themselves outside what is happening on screen. Since the film neglects to consider reactions other than mere complacency in the middle class, it becomes difficult to discern a strategic activist agenda in it.

Rather, At My Doorstep is important because, by contributing to an existing body of documentary films on working class masculinities, Nishtha Jain argues for an understanding of the coping mechanisms adopted by men who have lost the economic basis of masculine identity. It is imperative to arrive at such an understanding of crises in masculinities if these reactions are to be steered away from misogyny and towards political actions aimed at a more egalitarian gender order.

In this sense, Dayanand's reiteration of Virginia Woolf's classic feminist statement - the need for a room of one's own - in addition to being a plea against class deprivation, demands feminist attention to the multiple facets of masculine marginality.

Romit Chowdhury is a graduate student of Media and Cultural Studies at Tata Institute of Social Sciences, Mumbai.