What are contract workers across the country pressing for?

A recent conference organised by the AICCTU in Bangalore saw more than 5000 contract workers marching in protest against the prevailing work conditions and in demand for regularisation of contracts as well as amendments in law. Here’s a list of the primary demands raised by the workers:

More than 5000 contract workers from across India gathered in Bangalore for an All India Contract Workers Conference arranged by the All India Central Council of Trade Unions (AICCTU) on 1 and 2 February.

The first day of the conference saw 5000 workers marching in support of their demands, and raising voices primarily for regularisation of contracts, parity in wages, social security, better working conditions and dignity of labour.

The rally saw huge participation from contract workers in Bangalore and elsewhere in Karnataka, as well as workers from other states such as Bihar, Assam, Gujarat, Uttar Pradesh, Tamil Nadu, West Bengal, Chhattisgarh and Maharashtra. 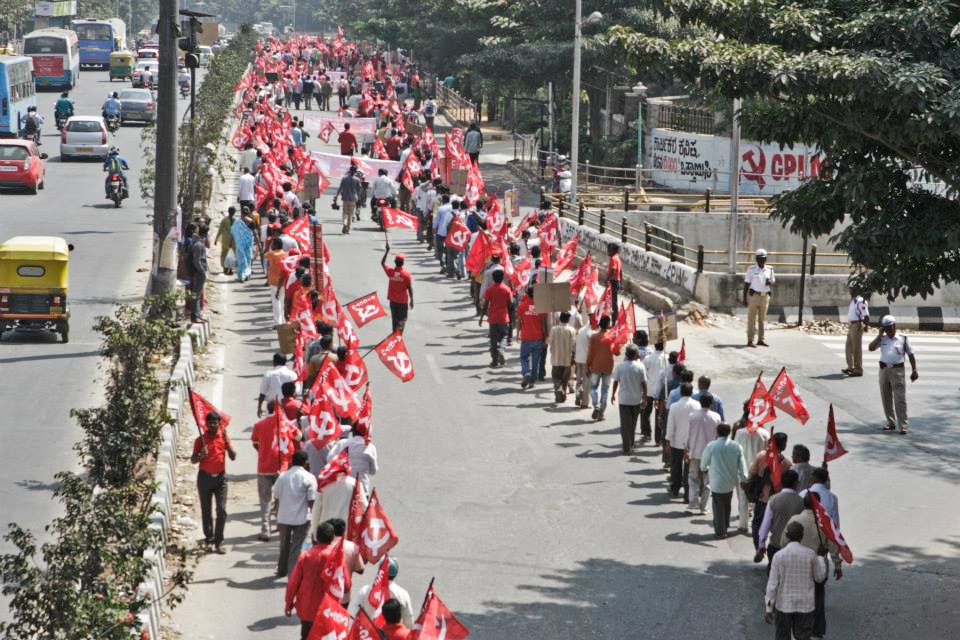 Contract workers from around India at a rally in Bangalore to protest the existing conditions of their work and related laws. Pic courtesy: AICCTU

The speakers condemned the increased contractualisation of labour in the private sector, the public sector and the government itself. They also spoke of how the Congress and the BJP appear to be no different as far as this issue is concerned.

The Modi government’s move to amend the Contract Labour (Abolition and Regulation) Act (CLARA) in a way that will exclude most establishments from the ambit of the law came in for sharp criticism from delegates attending the conference on the second day.  They resolved to march to Parliament to press for their demands.

The conference also saw the launch of the All India Contract Workers Federation to lead and shape the struggle of contract workers across the country. It ended with a call for a strong and resistant-all India network of contract workers to resist the joint onslaught of the government, industry and the judiciary on the workers of India.

The demands raised by workers were as follows:

• Regularise all contract and other workers engaged in perennial nature of work;

• Amend the Act to facilitate regularisation;

• Allow continuance of same workers even in case of any change in contractors and make it a precondition for any contract;

•Treat outsourcing as a contract and bring outsourced workers under CLARA;

• Make the principal employer responsible for compliance with all labour laws;

• Remove the eligibility criteria of 20 and extend applicability to every individual worker;

• Punish employers who do not pay double wages for overtime work over and above 8 hours;

• Implement all social security schemes to contract and informal workers;

• Have an exclusive inspectorate for contract workers to monitor implementation of all labour laws;

• Ensure equal pay and service conditions for women workers, crèches and maternity leave with wages, transport and other gender-specific facilities, such as no night shift for women;

• Withdraw all pro-corporate proposals of amendment in labour laws and bring in amendments to protect job security, wage security, social security, the right to form unions and the right to strike;

• Bring in amendments in labour laws to nullify the effects of anti-labour judgments;

• Empower labour department with necessary administrative, not judicial, powers, including the power to punish employers not attending conciliations and allow workers to approach a competent court of law, on any issue, without any conditions;

Adapted from a Press Release by the All India Central Council of Trade Unions dated 2 February, 2015