The God that owns Kerala must be appearing to its villagers often in the tall frame of a coconut palm. The prospects of the villages, particularly of Keralas coastal belt where 60% of its population lives, have closely followed the fortunes of the coconut sector. As this sector has declined over recent years, so too has the socio-economic condition of these villages.

Politicians who have taken up the cause of Kerala's coconut sector have usually made huge electoral gains because a considerable number of people depend on the sector directly or indirectly. However, in recent years coconut farming has taken a turn for the worse, often forcing farmers to divert their land for activities for sustenance. Farmers cannot hope to survive unless they convert at least part of their holdings to other cash crops. In one of worlds most densely populated areas of rural-urban continuum., the average holding is only a few cents of land, and the coconut farms have typically taken all this space, minus the plinth of the dwelling.

"There is an organic relationship between the coastal community in Kerala and the coconut tree", says P K Thampan, eminent coconut expert and founder-president of Peekay Tree Crops Development Foundation. This relationship holds true for most Asian economies where coconut is a major crop. It was this understanding that convinced the Rome-based International Plant Genetic Resources Institute (IPGRI) and the Malaysia-based International Coconut Genetic Resources Network (Cogent) to evolve a community-based model that sets great store by that relationship. The model, funded by Asian Development Bank, envisages empowering poor coconut farmers through a community-based approach to product diversification and creation of multiple sources of food, income and employment. 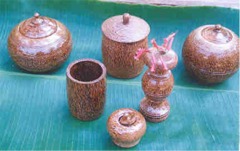 Wood products from trunk of the coconut tree

Vayalar, in Alappuzha district, is one of the two grama panchayats of Kerala where the model is being tried. It is a typical South Indian coastal village; densely populated and with highly fragmented holdings. Kasaragod in Kasaragod distrctict is the other grama panchayat in Kerala, and Ariankuppam in Pondicherry is the third test location in India. The Peekay Tree Crops Foundation is the implementing agency of the programme for Vayalar and the Central Plantation Crops Research Institute, Kasaragode, is the agency for the other two grama panchayats. Apart from these three villages in India, a total of 60 others in seven other countries  Bangladesh, Indonesia, Fiji, Papua new Guinea, the Philippines, Sri Lanka and Vietnam  are benefiting from the three-year project began in July 2002. The outlay for the three villages chosen in India is US $54,750.

Vayalar is a village of narrow land strips flanked by extensive water bodies, with coconut grown in almost all homesteads that have space for at least one tree. It is estimated that the coconut acreage in the grama panchayat is roughly 1000 hectares. The holdings are small, in some cases a fraction of a hectare. The percentage of below-poverty-line farmers is very high. About 74% of the villagers grow coconut trees and some 38% of the population keeps livestock to augment incomes. There are about 4000 households in the grama panchayat, of which 560 belong to socially and economically backward communities.

The core of the project is a community-based organization, the Vayalar Community Development Centre (VCDC). A member each from families in the grama panchayat below poverty line can join the VCDC by paying a membership fee of Rs 105. The VCDC already has about 700 members. Its secretary, Omana Banerjee, expects the membership to reach 1,000 by the end of the year. The VCDCs significance is that in addition to being a community-based framework to get the programme moving, it is the bulwark of empowerment of the economically challenged women of the grama panchayat. The executive committee of the VCDC has given the women an extra clout in the happenings in the area.

A community meeting of VCDC

Apart from the training given to economically backward sections, no other component of it is given free of charge. Microcredit, channelised through the elected executive of VCDC, forms the backbone of the programme. Omana Banerjee said the microcredit programme has so far been a thumping success with a loan recovery rate of almost 95%. This, she feels, has been possible because of the personal rapport that the VCDC members have with the beneficiaries. In the first round, 54 families were advanced microcredit of Rs 1000 each in October 2002 to develop intercropping in coconut farms and imporove livestock rearing. The second round of credit distribution in July 2003 saw the distribution of Rs 1500 each to 140 families to improve coir making facilities. Another 24 families were advanced Rs 2,000 each for horticulture in coconut plantations in August 2003.

Under the training programme, the VCDC imparts free training to its members in collaboration with a wood working unit, Jupiter, in making handicraft items using coconut tree wood, shell, husk and fibre. It is also providing training in food processing. The VCDC itself has set up a food processing unit, Sowbhagya, which makes and markets delicacies using indigenous recipes.

The VCDC has understood the importance of product diversification if coconut farming is to flourish. For this it is looking at setting up processing units for different products. It has joined hands with private entrepreneurs to set up a copra drying unit with the capacity of about 5,000 nuts per day. It has plans to set up an expeller unit to mill coconut oil from copra, a vinegar unit that will use coconut water as feedstock, and a unit to produce shell carbon. Another unit on the anvil is one to produce ready-to-eat food products using kernel and coconut water. They are also contemplating branding the products of VCDC in a bid to enhance their market presence.

The commmunity has understood the importance of product diversification for coconut farming. It has joined hands with private entrepreneurs to set up a copra drying unit with the capacity of about 5,000 nuts per day.

The project seeks to achieve comprehensive management of the coconut economy. The VCDC members are confident that they are on the right path, and that they will be able to expand their operations with a higher outlay of funds for enhancing their credit network. According to Preeti Panicker, a housewife who is member of the Devi Narayana Self-Help Group, the programme has brought a new life to the coconut groves of the grama panchayat. She believes that is has shown that with the right kind of support much can be achieved even with minimal outlays.

That is perhaps the greatest lesson from the experiment. Where governments in developing countries have repeatedly failed in spite of huge financial outlays in ensuring efficiency in utilization, the VCDC shows how well-directed need-based microcredit programmes can work. The management by a community-based organization ensures that projects are strictly need-based. The absence of intermediaries ensures maximum utilization unlike in government-sponsored credit. With economies losing their insulating shells rapidly to the globalizing zeal, efficiency of local efforts at rejuvenating economies becomes a key factor in survival. Thampan believes that the model could be replicated throughout Kerala leading to a resurgence of the coconut economy. (Quest Features and Footage)