Growing business at the bottom of the pyramid

It is tempting to take a rosy-eyed view of the future of successful entrepreneurship at the BOP. But what is the picture really? Richa Govil takes you through some recent stories and the lessons they may hold.

Amili smiled confidently as she answered each question in Malayalam through a translator. As she answered each question, the other women nodded in agreement. Over two visits and hour-long interviews it became evident that the women of Thejas Nutrimix were on to something. Here were a dozen women running a successful small business. They knew their business inside-out; any one of them could rattle off the prices of their inputs and their trends, their production capacity, their biggest production bottleneck, marketing issues and even their major challenges in the future. 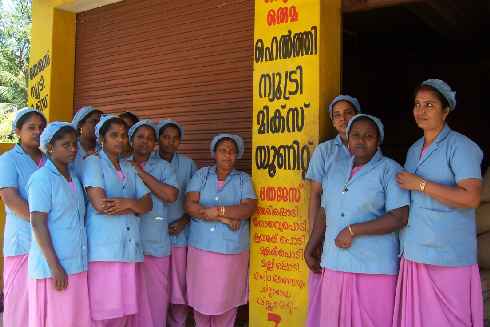 The women of Thejas Nutrimix, a nutrition supplement business for schools. Amili is at the far right. Pic: Richa Govil.

The main product of their business is nutritional supplement for schools. They roast, grind and mix various ingredients to produce this dry supplement which is delivered to schools, where it is boiled with water and served to children as kanji (porridge). When I met them they were in trying to diversify into wheat and rice flour, trying to figure out the right price for their products.

As more and more NGOs and government agencies attempt to tap the power of markets for poverty alleviation, they are increasingly turning to entrepreneurship promotion and support. While Kudumbashree has focused on initiating group enterprises, many NGOs focus on sole proprietorships, often but not always run by women.

The common theme among these kinds of enterprises is their scale. The promoters and incubators of these enterprises hope that they will increase incomes of the families involved in the business. They envision a future where the poor are enabled to start thousands and thousands of such enterprises (Kudumbashree already has 15,000) to support their families.

They dont expect any of these to become the next Tata or Infosys, but make enough profits to supplement the income of their households.

Timbaktu Collective believes that farmers should engage with mainstream markets from a position of strength. Since size matters in modern markets, this means the creation of farmers cooperatives consisting of thousands of members pooling their produce and their efforts.

For decades Timbaktu Collective has worked on sustainable development in the drought-prone regions of Anantapur district, leading various efforts focusing on landless and small farmers with special emphasis on women, children, youth and dalits. A few years ago they decided to promote organic farming of local varieties of millets, as a means to increase farming yields and incomes in the area. Their produce is marketed under the brand Timbaktu Organic and is available at several locations in Bangalore.

When I visited their production facility, it was clear that through their local knowledge and some trial-and-error they have honed their methods for collecting, sorting, grading, and testing the quality of produce. They had put in processes for deciding how many people to hire, whom to take on in permanent roles and when to hire people on contract basis. It was clear that they had a firm grasp of operational principles. 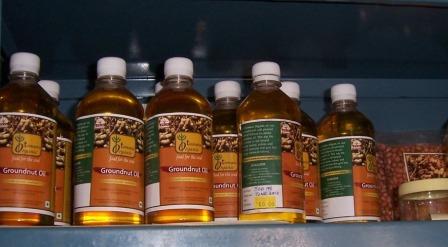 A look through their financials showed that while the business is currently unprofitable, it hopes to reach profitability soon.

Another NGO, called Maya, incubated a set of group enterprises together with a marketing front-end (what they call support services), to produce and sell wooden toys which meet international child safety requirements. While they shut down their Bangalore retail outlet, they continue export operations as well as selling through other retailers.

Industree Crafts is creating a chain of stores (Mother Earth) for retailing natural and organic products; roughly half of the fabric and natural fibre products sold at these stores currently are procured from a set of group enterprises they themselves incubated in and around Bangalore.

These are just a few examples of the large number of efforts (for-profit, non-profit and everything in between) that promote micro-entrepreneurship among the rural and urban poor with the objective of increasing their incomes.

All this activity compels us to ask : Are these efforts successful?

The meaning of success

Whether the vision entails thousands of successful microenterprises bring people out of poverty or fewer small enterprises helping market the produce of the poor (farming or crafts), it is tempting to take a rosy-eyed view of the future of entrepreneurship at the bottom of the pyramid.

However, lets pause for a moment.

If this were a corporate environment, we know how to answer that question: success means first and foremost profitability (which is necessary for survival), and then comes growth  in profits and in revenues  and a reasonable return on investment.

In BOP businesses these are not easy questions to answer. For microenterprises (sole proprietorships), how do we know whether the business activity is profitable if personal finances are completely intermixed with business? Even larger group businesses or cooperatives dont always prepare correct Profit & Loss statements because they dont always understand difference between capital and operating expenses or P&L versus cash flow.

Lets look at the next criteria of growth. In the case of larger businesses like farmers cooperatives and retail stores growth can mean the same thing it does in our corporate lives, that is, growth in revenues, in profits, in number of retail stores (for a retail operation) and so on. But what does growth mean in the context of a flour mill run by 12 women? Or a kirana shop run by a mother of three?

The final question of return on investment is the toughest to answer. Some of the investment is clear  capital for machinery or working capital. But some others you have to dig harder for, especially when NGO finances and business finances are mixed up during the incubation years.

All this is not to say that there are no clear successes.

Thejas Nutrimix, for example, is not only profitable but growing. Within 3 years the business was able to save enough (through retained earnings and deferred payments to owner-employees) to buy land for expansion. For the moment, lets leave aside the question of whether this was an advisable move, in the classic rent versus buy sense, but focus on the fact that the business was able to generate Rs. 3 lakhs in cash for expansion.

Or take the case of Ashraya, a crafts products business based in the small lanes of Bangalore. It produces baskets, bags, boxes and other natural-fibre or leather products. It recently rented an additional building for increasing production.

Timbaktu Collectives Dharini Farmers Marketing Cooperative doubled revenues last year through improvements in operational and financial management. It is stories like these that show that it is possible to create growing businesses at the bottom of the pyramid. They give hope to those looking for market-based solutions to a myriad of issues related to poverty and its consequences. They invigorate and drive those working in livelihood promotion.

Richa Govil is a business consultant who works with businesses owned by or interfacing with urban and rural poor. This article is the first in a series that examines businesses that operate at the so-called bottom of the pyramid.