The recently held Kolkata People’s Film Festival – an offshoot of the founding movement called The Cinema of Resistance – screened several powerful documentaries and feature films portraying the struggle and resistance of the marginalised and downtrodden. Shoma Chatterji reports on this festival with a difference.
16 February 2015 -

“One must make films politically,” said renowned French film-maker Jean-Luc Godard, underscoring that it was not enough to keep on making political films. The latter refers to films dealing with subjects that have come to be considered ‘political’ over a given period of time. This may apply to films made within the commercial mainstream as well as films that are documentary in form and content, and the interpretation of ‘political’ might be entirely subjective.

Making films ‘politically’ on the other hand, explores the way in which the films are made: independent of funding compromises, shorn of compromises on content for fear of censorship, creating one’s own avenues of exhibition and distribution, and so on. This of course depends and is also determined by the subject chosen for a given film and the manner in which it is treated, unfolded and narrated.

The 2nd Kolkata People’s Film Festival (KPFF) that concluded recently is a classic illustration of one such movement that embodies the principles of making films politically. In 2006, some cultural activists got together and pooled contributions from the people of Gorakhpur to arrange a film festival called The Cinema of Resistance, a kind the Hindutva-dominated city was not used to.

Soon enough, the festival became an annual affair and entered its ninth last year.  Evidently, it had created perceptible ripples in the local cultural scenario and punched a few holes in the right places.

“At the heart of the matter is people's resistance – against the neoliberal economic onslaught, the feudal fetters, the imperialist domination and that of patriarchy, caste-oppression and communalism. The fight for people's rightful control over jal-jangal-jameen (water, forests and land) and their preferred means of livelihood, and the fight towards equality are at the pulsating heart of resistance,” says Sanjay Joshi, one of the founders of the movement.

The annual catalogue of the Kolkata People's Film Festival gives a shout-out to people's struggles and resistance.

“Resistance” here, is defined as “the act of resisting, opposing or taking a stand against a given philosophy, ideology, concept, act or practice.” Applied to cinema, it suggests films that take a stand against anything that violates human rights, child rights, constitutional rights as also against oppression and marginalisation of an individual or group of individuals based on class, opportunity, language, culture, earning avenues, and penury.

Thus, “The Cinema of Resistance” is more a movement than a festival, where films are made politically and the manner often leads to films that could be labelled political. It is an alternative space that independent filmmakers have created and where they now command their own audience that has been increasing in numbers every year.

Because the films chosen for screening often explore political subjects and issues in great depth and are also made ‘politically,’ sometimes, it takes years for a single film to be made for want of resources. Sometimes, completed films never get screened. Sometimes, films get stuck at the CBFC and a long court battle ensues. Anand Patwardhan’s films are the best illustrations in point.

But even in the face of such hurdles, as Joshi points out, the festival and the films it showcases have witnessed an unforeseen proliferation, taking roots in more than ten cities spread across seven states. Inspired by the UP experience, chapters were born in Bihar, Rajasthan, Chhattisgarh, Madhya Pradesh, Uttarakhand and West Bengal.

In 2014, the movement prepared to take its first steps in four more states, namely Haryana, Delhi, Odisha and Andhra Pradesh, as local teams crystallised. “Perhaps it is a good time for a retrospective pause to take stock of the journey that has brought us this far,” feels Joshi.

The Cinema of Resistance festivals – organised, funded and created independently by each region – have been organised solely with the help of people’s funding, with no governmental or corporate sponsorships. This sets them apart from glittery festivals with abundant funding, which mainstream film festivals can easily garner but which obviously have strings attached, such as commercial compromises demanded by sponsors and corporate bodies.

Kolkata is one of the regional centres that began hosting the festival in 2014, organised by Jan Sanksriti Manch and People’s Film Collective, Kolkata. The segment calls itself the Kolkata People’s Film Festival and began its journey last year. It has dedicated itself to alternative film screenings, distribution and film-making practices aligned squarely with people’s struggles. No one needs to buy tickets to attend the screenings though everyone is invited to contribute according to one’s willingness and ability.

This year, the motto of the KPFF, which is the 43rd in a line of ‘cinema of resistance’ festivals held across the country since 2006, was “people’s culture with people’s support”. The screenings, speeches and panel discussions were held between the 22 and 25 January at the Jadavpur University.

The 2015 KPFF, inaugurated by Dr. Binayak Sen, was dedicated to people’s littérateur Nabarun Bhattacharya, who passed away last year. The theme was “resisting fascism and gender violence.”

Bhattacharya’s writing was committed entirely to revolutionary and radical aesthetics and therefore, the organisers thought this would be a good platform to pay a tribute to him. The festival screened a 22-minute documentary on the writer titled Ei Mrityu Upatyaka Jar Desh na (Poet from Death Valley) directed by Pavel.

The title is borrowed from Nabarun Bhattacharya’s poetry collection of the same name. The film fleshes out the audacity of the poet-writer in moving against the wind, his invincible will power, his fight with his pen, his brazenly open anti-establishment stance and his complete shunning of awards as his expression of resistance.

Among other films of resistance screened was Nagraj Manjule’s Fandry – a feature film that focusses on the impact of the one-sided crush of a dark-skinned teenaged boy for a fair, upper-caste girl who is not aware of this and does not care. Fandry means ‘pig’ in Marathi and the title is a metaphor for the class he is born into.

A still from the film Fandry. Pic courtesy: KPFF

The backdrop is a small, remote Maharashtrian village, against which the boy’s dreams around the girl as also his passionate desire to rise above his low caste roots, his family’s desperate poverty and the way in which he has to eke out a living are pictured.  The aspirations of the boy to rise above his ‘class’ is expressed through this crush for a girl who is fair, pretty and belongs to the upper class. Without turning the film either into a soppy, sentimental melodrama or an overdose of sympathy for the downtrodden symbolised by the boy, Manjule has created a beautiful story about the tragedy of social class created by man.

Deepa Dhanraj’s Invoking Justice (2011) is a strikingly original political comment on the Jamaats.  In Southern India, family disputes are settled by Jamaats—all male bodies which apply Islamic Sharia law to cases without allowing women to be present, even to defend themselves. Recognising this fundamental inequity, a group of women in 2004 established a women’s Jamaat, which soon became a network of 12,000 members spread over 12 districts.

The women’s Jamaat exists to hold their male counterparts and local police to account, and to reform a profoundly corrupt system which allows men to take refuge in the most extreme interpretation of the Qur’an to justify violence towards women. Despite enormous resistance, they have been able to settle more than 8,000 cases to date, ranging from divorce to wife-beating to brutal murders and more.

In Invoking Justice, Deepa follows several cases, shining a light on how the women’s Jamaat has acquired power through communal education and the leaders’ persistent, tenacious and compassionate investigation of crimes. There is some extraordinary footage of the Jamaat meetings, where women often shout over each other about the most difficult facets of their personal lives. Dhanraj has successfully turned the documentary format from being just another form of audio-visual expression into a very powerful tool of political consciousness-raising.

Nakul Singh Sawhney’s Muzaffarnagar Baki Hai raises questions, during its 135-minute footage, on how Muzaffarnagar and Shamli districts in Uttar Pradesh, known for lives led in relative harmony between Hindus and Muslims, suddenly turned witness to the worst-ever anti-Muslim pogrom in their history since Independence, in which more than 100 were killed and nearly 80,000 rendered homeless. 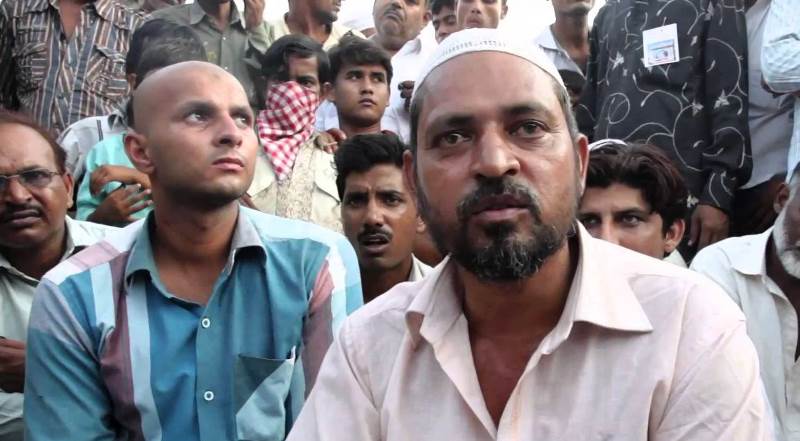 The film explores the tremendous impact of this violence on ordinary residents and how it has changed the original equations that existed between and among the paradigms of society, economics, and politics in the region. On the one hand, while the film journeys across the affected areas to explore the question of women’s honour, the easiest sandbag used to provoke people, on the other, it explores different aspects of Dalit politics and the questionable role played by the ruling Samajwadi Party.

M.S. Sathyu’s Garm Hawa was among the few feature films screened. It spells out the tragedy of the forced displacement of a Muslim family to Pakistan because they wish to remain where their roots are. Garm Hawa is probably one of the best celluloid documents that outlined and then fleshed out the pathos of the Partition and the tragedy of the minority community, as it suddenly began to find itself driven away from the mainstream especially with respect to economic survival. It is a story about a Muslim family that chooses to stay back in India after Partition in 1947 but gets mired in personal struggles and tragedies in the process of wanting to stay back.

Reena Mohan’s award-winning documentary Kamlabai (1992) on the first film actress in India was a pleasant surprise. A first-person account of Kamlabai by the director, the film still retains its freshness and is a fine example of the biological documentary.

Contrary to what might be perceived, there is no compromise on the aesthetics of cinema within this framework of narrating real stories of resistance. In fact, in most cases, such as in Anand Patwardhan’s series of films or Deepa Dhanraj’s Invoking Justice or the series of films on adivasi movements in Jharkhand made by the group Akhra, the aesthetics emerges from the story or is structured into the story-telling strategies by respective filmmakers, or both.

The films screened reveal the mastery of the filmmakers who do not, even once, overshadow or dominate the subject/s they are dealing in. The films do not unveil any hierarchical relationship between the filmmaker and the subject. In fact, they change the ordinary viewer’s way of watching and reading films and deriving such education and information from them as he or she was probably not aware of or knew little about to begin with.

International films that lend themselves to this ideology were also screened at the Kolkata festival. Among them were Bert Haanstra’s Glass (1958), Abbas Kiarostami’s The Bread and Alley (1970), Norman McLaren’s Neighbours (1952), Afarin Eghbal’s Grandmothers (2011) and Jafar Panahi’s The Accordion (2010), underscoring the universality of cinema of resistance across geographies, culture and time.

The KPFF had also organised an exhibition of twelve original paintings, made during the 1980s, by eminent Delhi-based painter Ashok Bhowmick, based on his memories of the Emergency juxtaposed with his reading of Gajanan Madhav Muktibodh's epic poem 'Andhere Mein' (In the Dark).

In the final analysis, the 2nd Kolkata People’s Film Festival was an ode to the documentary format in general and to the cinema of resistance in particular.