The government's agenda for water privatisation has relied heavily on the supposed success of the chosen model in Chile. A new book reveals we may be learning the wrong lessons. Shripad Dharmadhikary reports.
07 June 2011 -

On the face of it, Conflicts Over Water In Chile: Between Human Rights And Market Rules may seem like just another book dealing with the water problems in one of the many countries of the world. A closer look, however, reveals that it is likely to have big and valuable lessons for India.

In 2005, the Maharashtra Legislative Assembly passed the Maharashtra Water Resources Regulatory Authority (MWRRA) Act. The law created the MWRRA as a three-member Authority which would be an independent regulator for the sector. One of the novel features of the Act is that the Authority is empowered to define entitlements of water, and then move to fix the criteria for market-based trading of these entitlements. These entitlements are to be such that they "may be transferred, bartered, bought or sold on annual or seasonal basis within a market system ..." In other words, the Authority is to seed the beginning of a full fledged water market.

What the MWRRA is to do is not a one-off attempt. It is the rolling out of the core philosophy of the World Bank and Asian Development Bank, two agencies which have driven the so-called 'reforms' in the water sector in state after state in India, through their money and advice. Both believe that water should be made into a commodity and allowed to be freely traded; this will lead to the allocation of water for the best economic use. The ADB's water policy stated, in 2001, that ADB will "... support the evolution of water allocation through markets of transferable water rights".

The World Bank explained this more clearly. Its Water Sector Resources Strategy adopted in 2003, stated: "... those requiring additional resources (such as cities) will be ... able to meet their needs by acquiring the rights of those who are using water for low-value purposes"; and "... there are strong incentives for those using water for low-value purposes to voluntarily give up their rights, making reallocation politically attractive and practical."

The work of the MWRRA itself has been moving ahead slowly, both because it is taking time to grapple with the complexities of the task at hand and also due to the strong resistance to many of the changes it is to introduce. Yet, it remains the favoured model, which the Government of India wants all states to emulate. For example, the 13th Finance Commission has talked about an incentive grant to the states if (and only if) they set up such an Authority modelled possibly on the line of the Maharashtra Authority.

When the World Bank and others pushed for trading in entitlements of water and the allocation of water by way of market sale and purchase, one of the justifications presented was such a system had existed in Chile for many years and had led to excellent results in economically efficient water allocation.

There were some indications even then that all was not so well in Chile, but there was little concrete information. One of the reasons was language - much of the information from Chile was not available in English. Conflicts Over Water In Chile is set to change some of that. It is the translation and abridged version of the original Spanish book, edited by Sara Larrain and Colombina Schaeffer of the organisation Chile Sustentable. Translated by Marcelo Montecinos, it has been published by Chile Sustenable and The Council of Canadians, and is supported by the Heinrich-Boll Foundation.

The book presents several facets of the Chilean experience that are significant in their implications, including for India. 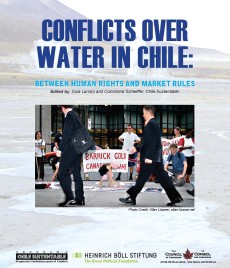 A striking result of the Water Code was the progressive concentration of water rights in the hands of a handful of big and powerful companies and individuals. As the book documents, just three companies own 90 per cent of the water rights for hydropower generation in the country.

The Chilean system was set up by the Water Code brought in by the military regime in 1981. With this Code, water rights were allotted by the Government to various entities. Once the rights are given to any individual or private party, the state no longer intervenes and reallocation of these is done through water markets, where these rights can be rented, bought or sold.

A striking result of this was the progressive concentration of water rights in the hands of a handful of big and powerful companies and individuals. As the book documents, just three companies own 90 per cent of the water rights for hydropower generation in the country, with just one company, Endesa, owning close to 80.4 per cent. Another serious consequence of this system has been the transfer of water rights to international and non-Chilean players. Endesa was originally a state-owned company, which was sold to a national private company, and is now owned by the Italian conglomerate Enel. The water rights went along with the company, and this means a foreign company now owns most of non-consumptive water rights in Chile.

About the right to consumptive water use (where water is used up and not returned to the watershed), most of these are in the hands of the export sector, mainly agro-business and mining. The majority of the agro-exports are grapes, apples and other fruits exported to Europe and United States.

There has also been progressive privatisation of the public water service, and now all but one has been privatised. This means that almost 100 per cent of the consumptive water rights for drinking are now in private hands. A more detailed discussion of the structure and operation of the water markets would have been useful, particularly for the Indian readers, but even what is presented presents the serious consequences of such a commodification of water.

As the book notes, among the main problems caused by this Water Code are the "loss of rights for the majority of the population of a common good ... the dispossession of peasants and indigenous farmers" and "the loss of public control over the ownership and management of water, generating a structural problem in the democratic governance of water, and thereby increasing local, regional and national conflicts for this resource." A whole section of the book is devoted to documenting some of these conflicts, ranging from struggles of local communities against mining companies, fights again export oriented agri-businesses and resistances to hydropower projects and others.

Several of these case studies document how the private players are given "a larger quantity of water rights than actually exists in diverse watersheds in the country; on top of giving water rights to speculators, such as Wachholtz (a businessman who personally owns 1.3 per cent of non-consumptive rights) over the ancestral rights of local communities, farmers and irrigators."

These cases recount many stories of displacement, dispossession, and destruction of cultural and social fabrics of communities. While these stories will seem familiar - similar stories abound in all parts of the world - the book documents how these are compounded in the case of Chile by the legal authority provided to the usurping of the local communities' water rights, in particular the rights of indigenous people, by making water rights into a market commodity.

The book also points out that the Water Code 1981 and the Mining Law of 1982 were both passed by the military regime "in times where there was no human rights respect, and in which the rights of indigenous peoples are undervalued, or directly threatened". While India is not under a military regime, there is ample evidence that in the mad race to give away (for a consideration of course) public resources like coal, minerals, gas, spectrum, land, water to big national and multinational corporate houses, there is little respect for human rights, and rights of tribal people are undervalued or directly threatened. We see this from Salwa Judum to Posco, from Arunchal with more than 100 dams being planned to the nuclear power plant at Jaitapur.

An important lesson for India from this book under review is what can happen when the market is given a free rein and resources of the country handed over to large corporates for extracting unlimited and excessive profits, unmindful of the rights of local communities. In a country with already high levels of inequity, we can ill afford the concentration of natural resources in the hands of select corporate houses of the kind seen in Chile.

The book also documents the long struggle - over close to two decades - of trying to correct the policies set by the Water Code, and restore the rights of the people. While there had been some progress, in particular a payment for non-usage to discourage hoarding (actually this probably only means that one can buy the right to hoard), the recent regime change in Chile has brought in a heavily pro-market Government that is now stalling further reform.

The book includes an introduction by Maude Barlow, National Chairperson of the Council of Canadians, and co-author of Blue Gold: The Battle Against Corporate Theft of the World's Water. She concludes her introduction by saying that "This is a failed experiment and must be exposed as such to the world." The authors, translator and the publishers of this book must be congratulated for facilitating this exposure. We can only hope that those in the establishment dealing with these matters in India will read this book carefully, and draw the right lessons from Chile's failure.