Life in no man's land

On a fragile island spread across 150 kms at the border of India and Bangladesh, thousands of people lead precarious lives at the mercy of the River Ganga. Shoma Chatterji reviews Char - The No Man's Island, a film depicting the tragic realities of their existence.
25 May 2013 -

The documentary in India still lacks a public platform. Attempts are made from time to time to make them accessible to the mass audience but these come in fits and starts and are rarely sustained. So, one has to wait for a festival to watch these films or, if one is friendly with the filmmaker, ask for a DVD and watch it at home. But documentary filmmakers like Sourav Sarangi are hardly deterred by the lack of an audience. Their films reach out far beyond Indian shores and are praised by the audience and awarded at festivals.

Char - The No Man’s Island, is a classic example of a film that continues to win accolades at home and abroad though it remains distanced from the larger Indian audience. Though this is a documentary, it has a real, full-blooded story. It revolves around Rubel, 15, who smuggles rice from India to Bangladesh. He has to cross the river Ganga acting as the international border. The same river eroded his home in mainland India when he was just four. Years later, a fragile island called Char was formed within the large river. Rubel, with his family and many homeless people settled in this barren field controlled by the border police. He dreams of going back to his old school in India but reality forces him to smuggle stuff to Bangladesh. But he fights on while monsoon clouds arrive inviting the flood and the river swells up again. “Char may disappear but we won’t,” smiles the boy. 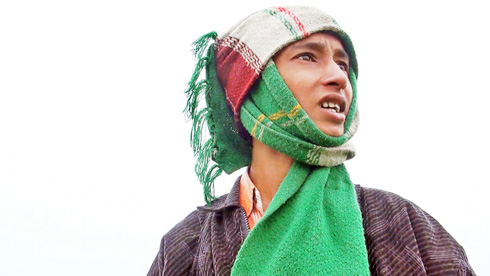 “When I met Rubel I was fascinated. He was a very charming and bright boy who was forced to smuggle rice from India to Bangladesh. His ambition was to come to India and study in a school, which he could not. Here again I saw a conflict. These were the motivating forces. It took time for me to conceive the film in this manner,” says Sourav.The story goes back to 2002-2003 when Sourav witnessed an entire village close to the India-Bangladesh border disappearing into the river Ganga because of erosion. The houses, the trees, the roads, the structures - everything that the villagers had created over the years was going down. That image made a deep impact on him. “I saw how hundreds and thousands of people became homeless overnight. I was making a journalistic film with my friend about river erosion. We made the film but this question haunted me - where do these people go? Where does the huge expanse of land go? The question remained within me and I kept visiting the place, meeting the same people who lost their homes. They accepted me as a friend from a city. And very slowly, Char- The No Man’s Island was born.”

Sourav Sarangi’s films focus on the spirit of the poor, the marginalised and the ignorant. He did it brilliantly in Bilal and has done it again in Char. The film points out how even Nature has neither sympathy nor understanding for this vulnerable group who live a precarious existence in a piece of land that has risen up on the Ganges near Farakka Barage in West Bengal in 1975 in the fear of losing everything to the eroding shores of the river and the rising tides which can happen any minute, washing them away. The island is named ‘No Man’s Island’ because it is as fragile as the people who live on it.

15-year-old Rubel dreams of going back to his old school in India but reality forces him to smuggle stuff to Bangladesh. But he fights on while monsoon clouds arrive inviting the flood and the river swells up again. "Char may disappear but we won't", smiles the boy.

•  Bilal: The darkness within
•  Livelihood crisis for refugees

The camera that is also an invisible ‘character’ in the film and a ‘voice’ speaking silently about Rubel and his fellow beings, follows the lives of these people, sometimes with candid forthrightness and often, clandestinely in the middle of the night through a monochrome green light that invests the scenario with a strange, mysterious aura, revealing the people in the tragic reality of their lives dictated by the border patrol, who are merciless in their dealings with them. Sarangi has painstakingly followed the cycle of seasons across the panoramic landscape whose picturesque beauty stands in sharp contrast to its real brutality that leaves lives teetering between life and death. No school, no medical facilities, no NGO to take recourse to when a young married girl is not accepted by her husband and in-laws because her parents cannot shell out Rs.50,000 in dowry! 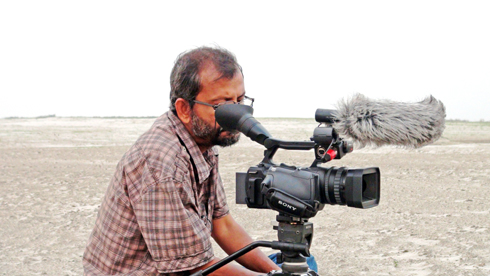 “The film was made possible because I got funds from Calcutta and from Locarno International Film Festival. I also found support in Japan. I collaborated with Italian producer Stefano Tealdi, Danish producer Signe Byrge Sorensen and Norwegian producer Jon Jerstad. Hence the film became an international co-production,” says Sourav. “I got technical, financial and creative support from all over the world. In fact this has become a good module for international co-production. I traveled to Japan for post-production and enjoyed the state-of-the-art technology there.”

There is another character called Sofi, a ten-year-old boy whose father was shot dead while caught smuggling on the border making him the sole earning member. “When I first met Rubel, he was around Sofi’s age. When I began to shoot, Rubel had grown up and I included Sofi to reflect the innocence I had seen in Rubel when I had met him some years ago and Sofi became a supporting character in my film,” says the filmmaker.

Char is not a portrait film though to many it might appear to be one. It tells the story of a community and how the community survived the onslaught of Nature that kept changing the landscape over seasons and through the years. It is thus a story of survival, of the idiosyncratic moods of the river Ganga which, the director insists is the real protagonist of the film.

“I saw the conflict between human existence and the harshness of nature, the strength of the nature that can destroy and that can create,” says Sourav. Today, around 10,000 people from India and Bangladesh, Hindu and Muslim inhabit this island spread across 150 kms of land that could increase or decrease depending on the mood of the weather, the torrential rains and thunder and the course of the river’s flow. The film spans around a year’s time, capturing the seasons of the year beginning with Durga Pooja. The white kash flowers that bloom only during the festive season and are famous for their depiction in memorable poetic aesthetics in Satyajit Ray’s Pather Panchali are swallowed mercilessly and brutally by the hungry river and the angry weather.

The film also weaves in the story of Rubel wanting to leave the Char to make a life for himself. He goes away to Kerala but fails to get a job and comes back while the film is being shot. In the end, Rubel, now grown, has gone away again and this time, his family has no clue about where he has gone and when he will return or whether he will return at all. Like the river Ganga that has toyed with the lives of his people, he has changed directions too.