The recent nod to Telangana has led to unrest and violence anew in Assam, where several groups have been struggling for their respective states for decades. Ratna Bharali Talukdar looks at the current situation in the context of the long and checkered movements for statehood in the region.
30 August 2013 -

The endorsement of the UPA government at the centre to carve out a separate state of Telangana from Andhra Pradesh has once again fuelled longstanding demands and aspirations among the four different tribes and communities living in the hills and plains of Assam for creation of their own states. The Bodos and Koch-Rajbangshis in the plains of lower and northern Assam, and the Karbis and Dimasa tribes in the hills of Karbi Anglong and Dima Hasao have been agitating for decades, demanding separate states on the basis of their linguistic and ethnic identities.

The Bodos currently enjoy autonomy in the form of a territorial council - the Bodoland Territorial Council (BTC) - under the provisions of the Sixth Schedule to the Constitution, and rule over the Bodoland Territorial Area District (BTAD). This comprises the four Assam districts of Kokrajhar, Chirang, Baksa and Udalguri. The Karbis and Dimasas also enjoy autonomy under the Sixth Schedule, ruling over the Karbi Anglong and the Dima Hasao hill districts respectively. The three autonomous councils have legislative, administrative, financial and judicial autonomy within the jurisdictional territories of the councils in respect of the subjects transferred to them by the State Government.

Apart from these three councils under the Sixth Schedule, there are six other autonomous councils for six ethnic groups of the state . the Rabhas, the Tiwas, the Mishings, the Deoris, the Thengal Kacharis and the Sonowal Kacharis. Besides these, there are 18 development councils for 18 smaller communities.

The Koch-Rajbangshis, however, do not have an autonomous council and the community's long standing demand for inclusion in the list of Scheduled Tribes (ST) has also not been met by the government. Apart from the Koch-Rajbangshis, five other ethnic communities . the tea tribes, the Morans, the Mataks and the Chutias have also been demanding the inclusion of their communities in the list of Scheduled Tribes.

Immediately after the decision to create a separate state of Telangana, the situation in the Karbi Anglong Autonomous Council (KAAC) area in Karbi Anglong hills district took a violent turn. In Karbi Anglong, the demand of some groups and organisations, including the ruling Congress, is for the creation of an autonomous state within Assam under the provisions of Article 244(A) of the Constitution of India that would include the two hill districts . Karbi-Anglong and Dima Hasao.

Some groups have also been demanding creation of a separate state with the twin hills districts. Some Dimasa organisations of Dima Hasao hill district, however, want a separate Dimasa state comprising the lands of Dima Hasao district, the Dimasa inhabited lands of Karbi Anglong district, some parts of Nagaon district and also Dimapur of Nagaland, which was once the capital of Dimasa kingdom.

Endless identity movements by tribes and communities in Assam have made the entire state a volatile zone. Apart from the democratic struggle, armed activities of various extremist organizations claiming the same cause have led to the killing of thousands of innocent people, burning down of villages and displacement of people.

•  Opting out of the chaos
•  Repeated mistakes in relief efforts

During the recent unrest, supporters of the statehood movement in the KAAC area torched government offices as well as residences of elected members of the Autonomous Council, Parliament and State Legislative Assembly, disrupting the entire law and order situation. At least 60 government buildings were burnt down over a period of one week. Miscreants damaged the main railway track at different points, disrupting rail links of Upper Assam with the rest of the country. Such wide-spread arson by the supporters of statehood led to a state of anarchy in the autonomous district, forcing the administration to impose curfew and staging of a Flag March by the Army.

The Telangana decision also prompted the Bodos - the single largest plains tribe in Assam - to revive their long standing demand for creation of a separate Bodoland state. However, while the situation in Karbi Anglong took a violent turn instantly, the All Bodo Students Union (ABSU), which had spearheaded a six-year long vigorous mass movement of the Bodos for a separate state over the years since 1987, called for a series of agitation programmes.

The agitation started with a 12-hour railway blockade on August 2, that disrupted the entire movement of railways to and from Assam. This was followed by a proposed 60-hour bandh from August 5, which was later reduced to 48 hours due to the Eid festival. ABSU has been organizing a series of rallies, sit-in-strikes and hunger-strikes throughout the BTC area, trying to mobilise the public to press for creation of a separate state.

Meanwhile, the Bodoland People's Front (BPF), which is running the Bodoland Territorial Council (BTC), organised a massive rally in Kokrajhar, the headquarters of BTC, demanding a separate Bodoland. Bodo MPs, political leaders and heads of different organisations staged a dharna at Jantar-Mantar and on the floor of Parliament during the first day of the Monsoon Session on August 5, to press for their demands. The ABSU has demanded immediate tripartite talks between its leaders, the centre and the state government on the issue of creating a separate state for them. 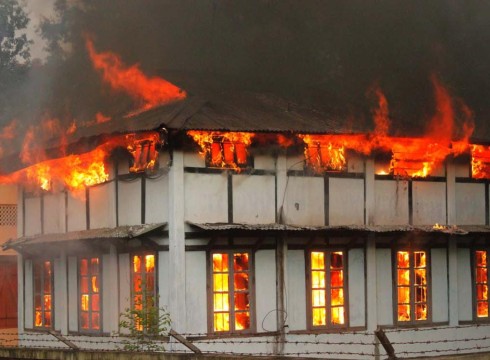 The movement for a separate Bodoland state has now triggered a counter movement and strong resistance from non-Bodo communities living in BTAD areas. The Aboro (Non-Bodo) Suraksha Samiti, an organisation of non-Bodos in the BTC areas, has announced agitation programmes against the demand for creation of a separate state. The organisation has alleged that the Bodos, who comprise only 28 per cent of the population in BTC, are not eligible to demand a separate Bodoland state.

A common platform of different non-Bodo organisations has also moved the Gauhati High Court, asking for the exclusion of 770 villages from the geographical area of BTC. They too allege that Bodo people in these villages comprise less than 50 per cent of the total population of the concerned village. Meanwhile, the Gauhati High Court has directed the state government to take necessary action accordingly.

The Telangana announcement has also prompted organisations of the Koch-Rajbangshis to announce a fresh movement for a separate Kamatapur state. The All Koch-Rajbangshi Student Union (AKRASU), which has been demanding a separate Kamatapur state, comprised of 15 districts of Assam and six districts from West Bengal, called a 36-hour bandh which was supported by other organisations of the community.

All these agitations and violence paralysed normal life in the state. Educational institutions did not function regularly, medical facilities were disrupted, roads and railways were blocked for several days. The imposition of curfew for consecutive days in the Karbi Anglong district threw life entirely out of gear, while prices of essentials spiraled.

The demands and struggle for more autonomy and separate states by leaders of different tribes and communities have formed a major part of state politics in Assam over the decades since independence. The state has already been divided four times to create Arunachal Pradesh, Nagaland, Mizoram and Meghalaya.

Although the tribes and communities mentioned earlier in this article have been struggling for creation of their respective states, the issue of geographical boundaries of the proposed states demanded by different organisations is confusing. A major portion of land demanded by the Bodos for their state, for instance, is included in the land demanded by the Koch-Rajbanshis for their state as well. Again, a part of the area within the demanded 'Dimaraji' state overlaps with the demanded hill state comprising the two districts of Karbi Anglong and Dima Hasao. The Kamatapur Liberation Organisation (KLO), another extremist group representing the Koch-Rajbangshis, has also been active in some areas.

Endless identity movements by these tribes and communities in Assam have made the entire state a volatile zone. Apart from the democratic struggles, armed activities by various extremist organisations claiming the same cause have led to the killing of thousands of innocent people, burning down of traditional tribal and non-tribal villages and displacement of people from their original villages. All these have created an atmosphere of mistrust and disrespect between groups of people living in the hills and plains peacefully throughout centuries.

Why have strong constitutional provisions such as providing tribal autonomy, administrative councils and even the territorial councils have failed to satisfy the needs and aspiration of these tribes and communities living in the state? It is sometimes alleged that the spirit of tribal autonomy began to be diluted almost immediately after the creation of these autonomous councils, as real powers mainly rested with the state government initially. For instance, in Karbi Anglong and in Dima Hasao districts, only six minor departments, such as construction of pavements and minor irrigation were handed over to the councils initially. Even the Chairman of these councils had to take prior approval of the distrcits' Deputy Commissioners prior to raising matters in the council meetings.

Over the years, endless corruption, misuse of money and the failure to devolve power to common people have completely jeopardised these unique institutions meant to empower the tribal people and safeguard their political, cultural and linguistic identity. The central and state governments have occasionally signed MoUs with the leaders of the different tribal groups, with an intent to deliver more power and money to these councils. But these have rarely translated into reality.

Autonomous areas are still considered to be among the most backward regions, lacking basic infrastructure and lagging in human development indices. The grievances of the tribal people have remained the same, while a section of their leaders has enjoyed power and money. It is expected that only the implementation of a federal structure in the truest sense would help improve the situation.

The Centre has decided to hold tripartite talks with all groups engaged in the statehood movements in the first week of September and it will be interesting to see what solution it offers in lieu of statehood during the talks. Will it devolve more power to the existing autonomous councils under the Sixth Schedule, with direct funding from the Centre and transference of more subjects and departments, or will it be an autonomous state within the state under article 244(A) that will not require further partitioning of Assam?

And will the agitating groups agree to anything short of a state for themselves? Only time will tell.