After a long, dark night

Bhor is a psycho-social journey into the minds and lives of inmates of a rehab centre, trying to build a world away from the mainstream. Shoma Chatterji reviews the play.
22 February 2010 -

Rangakarmee, the oldest and the most venerated Hindi theatre group of Kolkata recently presented its new production, Bhor. Conceived, written and directed by Usha Ganguly, the group's founder-director who won the Sangeet Natak Akademi Award some years ago, Bhor is a psycho-social journey into the minds and lives of inmates of a rehab centre, trying to build a world away from the mainstream that has either rejected them or tries to hide them. They come from different backgrounds and belong to different age groups. An old man lives with the desire of going back home to the kids he has left behind. A rehabilitated young man takes leave of his friends, happy because he is free, sad because he is leaving his friends behind.

Rangakarmee has done old plays, specially created plays, classical and contemporary plays to portray the socio-political scenario of sections of society we generally keep away from. Among its major productions over the past three decades are Mukti, Rudali, Court Martial, Kashinama and Holi. Bhor encapsulates a small, sad world of people who lend each other their shoulders to weep on, fight and make-up, and try to love, hate, fight, struggle within this small world.

The curtain rises to show Somu, a young man, who doubles up as narrator and inmate. He is sitting on the floor of the stage, in front, writing into his diary. The single spotlight that falls on him throws in sharp relief, the darkness all around. It is both a physical darkness and a metaphorical darkness, reflecting the darkness their lives are enveloped in.

Another curtain rises behind him, slowly revealing the other inmates, led by their mentor and guide Bhai-da, holding candles in their hands to light up the blackness. Mintoo, Bunty, Michael, Rana, G K, Raja-da, Jaggi, Shamim, Shibu, Jai, Peter and Ranju come from different backgrounds. But they have one thing in common - they live in a drug rehab centre to rid themselves of their addiction. At times, they are successful, at other times, they fail. But they live in the hope that dawn will break one fine day. This hope flickers like the flame in the candles they hold in their hands, with a cloud of uncertainty. But it is there all the same.

"My constant interaction with urban young people introduced me to the dark and dangerous world of addiction, addicts and rehab centres. I realised that this is kept away from the limelight within our performance culture, because people do not feel easy talking about it. I personally visited rehab centres, spoke to the inmates and even some of their parents. I learnt about drug addiction and the long and painful process that led to rehabilitation. I was confused because the parents did not want even to admit that their children were drug addicts. This triggered the desire to present a microcosm of their world through a play, that's how Bhor was born," says Usha Ganguly. 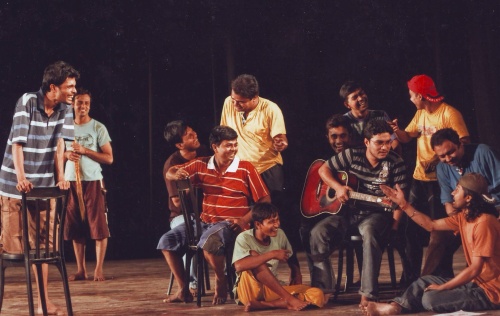 Mostly in Hindi, the play makes generous use of Bengali and English as well. It is Rangakarmee's first multilingual production that expands the horizons of its audience and its world. Som is an educated young boy and Michael's mother tongue is English. Bhor opens a window to a world we have heard about, seen in films and read in the papers but hardly seen in live action. Bhor brings to life the pathos that underlies the surface bonhomie of youngsters of different ages, filled with moments of action, speech, body language, light, music and space. The actors do not act, they perform - singing, dancing, jumping, fighting, playing, crying and laughing with a spontaneity that sometimes makes one forget that one is watching a play being enacted.

Running like an undercurrent through the play are questions on what drew them to addiction in the first place. A fragmented home environment? Poverty? Peer pressure? Or, is it out of some inner-driven frustration they cannot put a finger on? Nothing is explained. Explanation is needless because the enactment says everything. The audience is pulled towards the collective tragedy of this marginalised group, distanced and alienated from the mainstream which, at one point, they do not wish to go back to. Their life outside their family and away from parents, brothers and sisters teaches them to create a different family within the rehab, with the help of Bhai-da.

The boys try to draw the last drop of joy from the kitchen, peeling dozens of potatoes and dumping them in a bucket of water, chopping loads and loads of cabbage for the day's meals. Between these chores, like sweeping the floors, they spar and fight and make up. They split into two teams and play basketball. Michael, a good singer, is forever strumming his guitar, ready to belt out a Beatles number or encourage others to begin a spontaneous antakshari of Hindi hits.

"My aim was to dig into the psychological aspects of addiction and victims of the addiction. I did not wish either addiction or addicts to be the subject of my play, nor did I want to highlight what goes on within a rehab centre and how it works. So, I designed the play psychologically, every scene telling you a new story," says Ganguly. "My observation is that the 'junk' that these boys are addicted to is the product of an overtly commercial society. It is produced, distributed, bought and sold in the market like a commodity and the young and helpless victims of this commercialised world have to fight their personal battles to transcend the barbed wires of their prison," she adds.

The drug rehabilitation centre covers an expanse that includes trees and shrubs, with a detoxification centre somewhere in the distant, taboo to regular residents. The set design is minimal, with action unfolding against a black screen. The lighting is strategic, sustaining the dark mood and philosophy of the play, brightening up when the mass march begins. Bhor brings out the struggle and the pain of youngsters who seek escape from a cloistered, suffocating, ostracising world of addiction. The play is about relationships that can make men survive even within the dark walls of a drug rehab centre. It is about the claustrophobia the young feel and their constant struggle to break through this suffocation.

Mostly in Hindi, the play makes generous use of Bengali and English as well. It is Rangakarmee's first multilingual production that expands the horizons of its audience and its world.

Bhor moves on without an interval, keeping the pace unbroken, increasing as it rolls towards the circular climax. The dynamic and ceaseless action keeps you hooked, mesmerised by the series of shocks. Bhor moves from the stark darkness of the stage, piling action upon action, punchy dialogue upon dialogue sometimes relieved by intelligent repartee with strains of "We shall overcome" playing on often in the backdrop. The play is a metaphor for hope for these boys most of whose lives have been reduced to moving from one rehab to another as Som laments in the end.. Along with Bunty, he has his 'ideal' called Jojo, a dear friend who either does not exist or will never come. In the end, they learn to cope without relying on their Utopian Jojo, and become independent.

A worried mother, who teaches in a college, brings her son G K to the rehab. He is packed off to the detox lab a little distance away. His friends Somu and Bunty try to relieve him of his loneliness but are caught and bashed up and taken back to the main rehab. Shamim is an introvert who does not talk. Raja-da punishes him by placing him on the hot-seat, a terror for the inmates, one of whom had earlier committed suicide the day after he was put on this seat. Mintoo, a Bengali who cannot speak Hindi or English, is made the butt of Bunty's attacks. Yet he tries to be part of the mainstream. Somu's girlfriend tries to draw him out but when he turns her away, she curses him and leaves forever.

Amidst the continuing drama, there is a sense that the play could well be unfolding in many different settings. Ganguly confirms this, "... it is not just a play on addiction. It could have been set within a university hostel, a terminal ward of a hospital or behind the bars of a prison. The manifestations may differ in degree, but not in the tragic denouement of those who live within this cloistered walls, perhaps forever," she sums up.