2004 saw many victories for the survivors of the Bhopal gas tragedy, giving them and their supporters more hope. Both courts in India and the US ruled to bring justice closer and campaigners pressured a reluctant Central government to finally act on their behalf. Kavitha Kuruganti reports.
04 December 2004 -

Bhopal, (WFS) - Today is the 20th anniversary of the Bhopal gas disaster. Looking back, one is struck by the contrast in responses to the Bhopal disaster and the September 11, 2001 attacks in the US. The 9/11 attacks, which claimed close to 2,800 lives, caused widespread outrage.

The Bhopal gas leak - in which around 20,000 people have died so far and more than 500,000 survivors and their children continue to suffer due to the lack of economic and medical rehabilitation - does not stir the same passions. Even today, there is little acknowledgement of the fact that it was Union Carbide Corporation's (UCC) deliberate choice of technology in its Bhopal plant that led to the gas leak.

For the past 20 years, the victims have demanded:

2004 saw many victories that have given survivors and their supporters some hope. A significant triumph this year is the award of the 14th Annual Goldman Environment Prize (considered the Environmental Nobel Prize) to women survivor-activists Rasheeda Bi (46) and Champadevi Shukla (52) on April 19. They have announced that they will set up a Trust for survivors with the money and institute an award for activists working on corporate accountability. 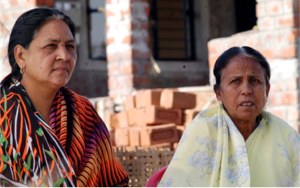 Rashida Bee (left) and Champa Devi Shukla, 2004 Goldman Environmental Prize Winners, Asia (India), in front of the Sambhavna Clinic. The clinic was established in 1995 to treat people who are still suffering from the effects of the catastrophic gas leak. File photo: Prakash Hatvalne

Over the years, Rasheeda and Shukla, who are office-bearers of the Bhopal Gas Peedit Mahila Stationery Karmachari Sangh, have mobilised women survivors in their agitation for proper rehabilitation and compensation for survivors of the disaster. Their 750km walk from Bhopal to Delhi, demanding that women survivors who were working as temporary unskilled staff be regularised by the government, is well known. Their innovative 'Jhadoo maro Dow ko' campaign - where they collected brooms from survivors and had them delivered to the then CEO Michael Parker and other senior officials of Dow Chemical - is also the stuff of legends. Their message: Clean up now or be swept out.

A ruling by the chief judicial magistrate presiding over the criminal case running in Bhopal courts was yet another significant victory. In June 2004, the court ordered Dow Chemical (India) to show why it should not be held responsible for not producing UCC in the courts. The magistrate also directed the Central Bureau of Investigation to step up efforts to extradite Anderson.

Even victims of natural disasters in India get paid more. But the small and big victories this 20th anniversary year are a stark reminder of the most patient, persistent and tenacious struggle ever.

Bhopal survivors had another small success on July 19, 2004, when a two-judge Bench of the Supreme Court of India - hearing a petition on disbursement of funds to survivors - ordered the immediate disbursement of the remaining funds from the UCC settlement amount. Around Rs 15.03 billion (US $1=Rs 44.98) were lying with the Reserve Bank of India, undisbursed to more than 554,000 claimants, largely due to bureaucratic hurdles. This money began to be released in October. Survivors have, however, made it clear that this is not a true settlement for two reasons:

(i) There are many unanswered questions with regard to the original settlement in 1989 and the wrongful basis on which the amount was calculated. The calculation did not take into account the magnitude of the impact or the long-term effects;

(ii) The settlement is a paltry US $550 (Rs 28,000) or so per claimant. As observers point out, even victims of natural disasters in India get paid more.

The US Second Circuit Court of Appeals in New York set a precedent earlier this year when it ruled on March 17 that the New York District Court should consider the Bhopal survivors' claims against UCC "if the Indian government or the state of Madhya Pradesh seeks to intervene in this action or otherwise urges the Court to order such relief". This was in response to a lawsuit filed by the survivors and their supporters in the US courts in 1999. The court had set June 30, 2004 as the deadline for the receipt of such a letter from India.

Although the state government issued a No Objection Certificate, the Central government was not ready to issue a letter to the US courts. The law ministry was of the opinion that all matters related to Bhopal had been dealt with by the Gas Leak Settlement in 1989. Legal luminaries from across the country - among them, former justice Krishna Iyer, academic Upendra Baxi and lawyer M C Mehta - drew a distinction between claims arising out of the gas leak disaster and claims related to contamination in and around the factory, prior to the leak and for two decades after.

On June 23, after stepped-up protests, mass petitions and hunger strikes across the world, the Indian government finally agreed to issue a letter to the US court. 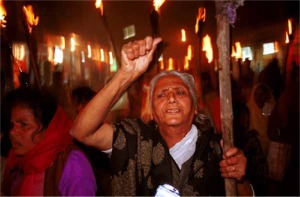 This year also saw another small legal relief for the victims of the contamination. Until a couple of years back, the Madhya Pradesh government refused to even acknowledge the fact that the tonnes of toxic wastes lying in the UCC factory is a major cause for contamination affecting more than 20,000 people in the poor settlements around the factory. On May 7, 2004, the Supreme Court of India directed the state government to provide clean piped drinking water to settlements contaminated by the poisons inside the abandoned factory. Since then, the government has claimed that it was supplying 360,000 litres of water per day, the ICJB (International Campaign for Justice in Bhopal) puts the figure at an abysmally low 42,000 litres per day.

The small and big victories this 20th anniversary year are a stark reminder of the most patient, persistent and tenacious struggle ever. It is a shame that even two decades down the line, survivors of the Bhopal gas leak should continue to struggle for justice. Dow Chemical Corporation (that took over UCC) is unwilling to shoulder accountability and our government has remained reluctant to support the survivors.

Kavitha Kuruganti writes on development issues and is based in Bangalore.