The riots and wrongs of caste

The Bhagwan Datta mandir in Belkhed, Akola, was built by Dalits when they were still Hindus. It was ostensibly the focus of the fiery violence there earlier this month. The real reasons? Caste, the decline of organised Dalit politics, the crisis in agriculture, and wage conflicts - all played a role, writes P Sainath.
29 September 2005 -

It's too small to be much of a temple. But at some 5 x 4 x 5 ft the Bhagwan Datta mandir was big enough to figure in the caste violence that rocked Belkhed village earlier this month. One in which over 20 houses in this Akola village's Dalit basti were torched, destroying 15 and badly damaging the rest.

"They ransacked my house, then set it on fire," says a still traumatised Lilavati Bhatkar. `They' refers to Belkhed's dominant community, the Malis. Raibai Gavai cries as she shows us the rubble that was her house. Not only were the houses razed, property was looted or destroyed too. For some, that meant everything they owned.

The Dalits here are impoverished agricultural labourers. Some of these tiny, ruined dwellings housed 12 or more people. The over 150 families in the basti have homes bunched together, often joined by common walls. The flames must have spread quickly. 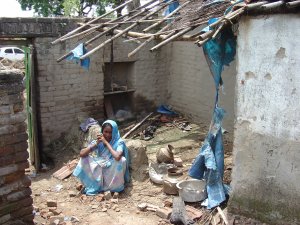 HATE CRIME: A distraught woman sits amidst the rubble that was once her house in Belkhed. Over 20 houses in Belkhed's Dalit basti were set ablaze, destroying 15 and damaging the rest. (Photo by P Sainath)

"It was the Pola (worshipping of cattle) festival day," says Liladhar Bhatkar. We passed several oxen that week, painted purple-pink for the occasion. "The Malis brought their cattle to this mandir in a procession. They have never done that before. Some of them, badly drunk, abused us. Then they stormed these houses in a big mob."

"They burned their own homes," a huge group of people speaking to us in the Mali basti insists. Dinesh Deokar is a member of the Bhagwan Datta trust, which he claims owns the mandir in the Dalit basti. "We've been there before but this had never happened. They stoned and attacked us. They even tried to damage the Ambedkar statue in front of the mandir and blame it on us."

A temple in a Buddhist basti? Caste Hindus amongst its trustees? A mandir on Dalit turf that caste Hindus would visit? An Ambedkar statue next to it? Attacks on Dalits in Akola - a Dalit stronghold? It's as complex as it gets. Belkhed is where a past of deep oppression meets a present full of risk and contradictions.

Belkhed itself has no history of open caste violence. Yet, its balance is a fragile one. The Malis are landowners. The Dalits, landless workers. Wages are dismally low. Male Dalit workers get Rs.30 and the women just Rs.20 a day. With agriculture crashing across the region, the Mali farmers, too, are in decline. That process and its class tensions, too, get reflected in caste animosity towards the workers.

The mandir was built by the Dalits when they were still Hindus. That is, before 1956, when they followed Dr. Ambedkar into Buddhism. It, however, stayed on their soil. And this did not matter much. Caste Hindus mostly avoided their basti. Only Hindu Dalits who had not converted would go there. And that was that.

The decades after 1956 saw the rise of a new politics in Vidharbha. More so in Akola. "This region saw a strong political assertion amongst Dalits," says Madhu Jadhav a veteran journalist in Akola. "Their organised strength posed a challenge to the land-owning Patils of different castes." The Dalits of Belkhed, amongst others, shook off the chains of a past of unspeakable misery. They were still very poor. But the worst excesses of landlord cruelty could now be fought off. Untouchability did not vanish. But it was pushed back. There were even a few inter-caste marriages. And some land struggles. These were a confident people.

Akola emerged a strong Dalit political centre. Republican Party of India candidates for this Lok Sabha seat crossed the 40 per cent voting mark in the late 1960s. Some Assembly seats here have often been held by the RPI and even by Prakash Ambedkar after he broke away to form the Bharipa Bahujan Mahasangha. Dalits over these decades had found their dignity and a firm voice.

So much so that even non-Dalit parties often ran Dalit candidates in elections. The zilla parishad chairman has been, more than once, a Dalit from the BJP or Shiv Sena. Dalit-led parties too, put up Mali candidates. In short, a pragmatic sharing of political space. This underlay Prakash Ambedkar's move for a grouping across caste lines that included the Malis. It came to be called the "Akola Pattern" and even worked for a while. However, while caste tensions were played down, they were far from eliminated.

The past decade saw setbacks. Like much of the country, the region saw an aggressive right-wing Hindu assertion. And a decline of organised Dalit politics as the RPI and others splintered in factional wars. The Akola pattern frayed. Prakash Ambedkar's defeat in the last Lok Sabha poll also mirrored these realities. In this milieu, the remnants of an ugly past have re-surfaced. Add to this the crisis in agriculture and sharpening wage conflicts. There could be other Belkheds as landowners try shifting their problems on to the backs of already poor workers.

House rebuilding has begun. But Belkhed's Dalits remain vulnerable. "We can't sleep safely at night," says Chandrakala Ingle in the basti. "What's worse, they are boycotting our labour. This trouble over the mandir is hurtful."

The fuss over the mandir has other angles, though. The tiny structure sits on 534 square feet of land. And more space adjoins it. All of this is within the Dalit basti and is right on the vital road leading in and out of Belkhed. At least one better-off Mali landlord views that as prime real estate. "Basically three or four people on either side had a dispute over this land," says Superintendent of Police S.D. Waghmere. "They managed to convert that into a wider conflict." The police also arrested 44 persons who are now out on bail.

In the Mali basti they complain of police brutality. They show us the doors police broke down to drag out suspects late at night. And women in shock from that raid. "Some 200 people have fled the village," they say. However, when police first entered the basti, they were attacked by the Malis. It was after this that the police cracked down. And policemen, too are in the Akola hospital, lying alongside the injured Dalits and Malis.

Some suffered from just being caught in the crossfire. Among the arrested was the village's main shepherd whose tribal family assures us they have no stake at all in the conflict. "See the result," says Suman, wife of Mahadeo Sishir. "The livestock of the village lay untended for days."

At the end of the day, there is no doubt about who the victims were. The Dalit houses burned down by the Malis write their own evidence. The claim that they did it themselves is a fiction reeking of caste prejudice.

Police action, not Dalit violence, brought damage to the Mali basti. No Dalit in Belkhed attacked anyone's house or property.

The labour boycott hits the Dalits hardest of all, leaving them hungry for days. Yet, with agriculture crumbling, the Malis, too, are in trouble. Using outside labour raises costs. Wage tensions can only grow. As the old Akola pattern erodes, other political forces fish in troubled waters. No one knows how chapter two in Belkhed will read. But the poor of the village pray for a happy ending.

BACK TO SCHOOL : Meaningful restart of education is critical
MORE ARTICLES
on similar topics ...
CASTE