Wells for the well-being

The Belgaum City Corporation has in the last one decade has revived 16 big and 21 small dug-wells. Today, 2 million gallons (16 per cent) of Belgaum's water supply comes from these local wells alone, leading to precious cost savings that have paid back the revival expenditure long ago. Shree Padre reports.
04 December 2006 -

Most of the citizens at Belgaum know 'Congress well' though it was abandoned till recently. In 1924, Congress party's historic convention held here was presided over by Mahatma Gandhi. This well was dug for that occasion. At that time, it cost Rs.4,370 and 3 annas, and it was supplying water to half of the city. But once the tap water was introduced, this well, like scores of others in the city, turned into a dustbin. Recalls M K Hegde, senior reporter, Kannada Prabha*, "Later it had earned notoriety as a 'suicide well'. There was lot of wild plant growth around; also, goondas used this area as their den. Gentlemen were scared to come near." 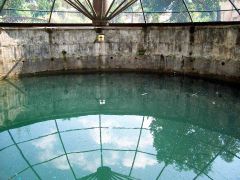 If you visit this place now, there is no tell-tale indication of the past deterioration. The well is full with water. A beautiful garden around. Water level remains just 2-3 feet below the ground in monsoon. It falls to six feet in May, that's the peak summer.

This is not a solitary case. Belgaum Corporation, in the last one decade has revived 16 big and 21 small dug-wells in two stages. It cost about Rs.2.75 lakhs each for the big wells for cleaning and subsequent water supply arrangements such as installing a motor, filtering unit etc. To save costs, overhead tanks were not constructed to push down water at pressure. Water is supplied to the areas wherever it can reach by gravity. Today, 16 per cent of the water needs of the city are met by these wells.

Belgaum's well revival campaign started in 1995. Monsoon that generally begins in June first week hadn't started even in the third week. The Rakoscope reservoir that supplies water had dried up. Frequency of water supply to the city fell to once a week from the earlier three days. At this juncture, people and administration started hunting for alternative water sources. They recalled the old wells which at a time were the only sources that fed water to the whole city. An expert committee led by Dr Chachadi, Head of the Department, Geology, Goa University, studied the viability of revival of these wells had given an encouraging report.

The conditions of all the wells were pretty distracting. Each one had silt of 8  10 feet. This was the result of immersing Ganesh idols in the well every year. Added to that, the residents used these as dumping pits. And unlike desilting of tanks, well desilting posed a challenge. Silting of tanks is done with polkline machines. These machines cannot get down into the wells nor do their arms have the reach the inside of a well. So wells can't be desilted with machines as with tanks. Doing it manually was the only option. But a new problem arose. None of the workers could stand firmly in the lose silt. Engineers were in a fix.

Seeing the work come to a standstill, a locally known rowdy came to the fore. As per his suggestion, a top-open barrel was used to send him into the well. He climbed the barrel in an upside down position as it was being let down by a bunch of people with the help of rope and pulley. After touching the silt, some portion of the barrel got sunk. 'Now send me a bucket from there', he advised. Then, standing firmly on the barrel platform, he filled the empty bucket with silt. Lo, a local 'technology' had evolved!

The city corporation started acting quickly. Local organisations like Rotary and Indal Aluminium Company also joined hands in the revival task. Luckily, none of the well water was contaminated. Once the desilting was done, providing filters, chlorinator and alum-doser were the only required safety measures before distribution. An alum-doser releases small doses of alum into the water to reduce its turbidity, to settle down any dust or other particles.

In 1964 population of the city was 1.5 lakh. Now it has risen to 5.5 lakh. Out of the daily supply of 12 million gallons of water, the combined contribution of these revived wells is 2 million gal loons.

Today, in about 8 hours pumping, each of the big wells provide 4 lakh litres of water everyday. "We have carried out recuperation tests in these wells. It takes about eight hours for them to refill. That means, if need be, we can go upto a maximum of 16 hours pumping. Moreover, in summer none of these wells dry. In fact, decrease in the water level from monsoon to summer is very minimal," says R S Nayak, Assistant Executive Engineer, Belgaum Corporation who is one of the masterminds behind this campaign. One big well caters to 1000 citizens while the smaller ones serve 500 people a day by supplying 1,50,000 litres. 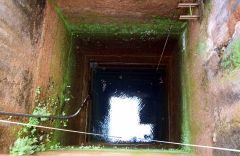 Banashamkari Theertha, constructed in 1885, one of the big revived wells. Pic: Shree Padre.

The quality of well water is also superior to the surface water that is supplied from far away. It is naturally filtered water that oozes out from the sub-soil everyday.

Rakoscope reservoir is 22 kilometres away from Belgaum city. Hidkal dam, from where additional water supply started later, is 45 kilometres away. Monthly electricity charges for pumping water from Rakoscope is Rs.20 lakh while that of Hidkal dam is Rs.1 crore! Compared to this, the wells require about Rs.60-90,000 for the same period.

Interestingly, nowhere in the vicinity of the revived wells, the corporation has had to dig new bore wells thereafter. Earlier, every year, it had to dig one or two in each ward. The total expenditure per annum for this was around Rs.35 lakh. Added to this was the expenditure for providing tanker water. Usually, from February, the corporation was spending in the range of Rs.20 lakh a year for this. Tanker owners typically charge Rs.400 for supplying 3,000 litres. At this rate, each one of the big wells are saving Rs.54,000 rupees a day. Going by that, the expenditure for the revival of the wells was repaid well within a week's time.

At Kudachi, in the outskirts of the city, the corporation has revived another very old well which probably is more than 300 years old. Nobody in this village knew that there was a filled up well here. The only indication of a possibility was a huge stone water trough used to provide water for horses. Only one old man of this village had always been recalling that there was a well here. But nobody had taken him seriously though there was persistent water shortage. While digging with polkline, stones used for wall construction of old wells were noticed. Yet, the corporation officers weren't very sure that they will strike water. Yet, they carried on. Today this well is the only water source that supplies to the 800 families around. While cleaning, even after 8 hours pumping with a 7 HP motor, the water level hadn't lowered much!

"Now we are not worried even if supply from Hidkal gets interrupted. No festival in this city is now affected by water shortage. In fact, these wells are a great blessing," says out M S Channppa Gowda, the Commissioner of Belgaum Corporation, with pride.

However not all wells that could be rejuvenated, have been. A high capacity well is still under the soil near Huthathma Chowk, opposite Kaveri cold house. It was named as 'barah gadgad' because twelve pullies were fitted to it. Recalls auto driver Parashuram Kamble, "I have seen it when I was a young boy of twelve. Families from around one kilometre vicinity were coming here for water. Till midnight, the pullies were making noise." In 1978 this well was deliberately filled up; it was around seventies that the culture of digging new wells came to a halt in Belgaum. Reason? When tap water was introduced, there was only lukewarm response to that. Hearing this from the field staff, an over-enthusiastic senior officer ordered for closure of the well. This was his method of making tap water popular. Today this is a vehicle parking area. Complain locals, "there was a move to revive this well recently; but politics came in the way."

A 'well' is an open-well or a dug well that draws water from shallow aquifers. Anybody can check the water-level by peering into the well.

A tube-well on the other hand is dug with a machine; its diameter is 4 to 6 inches, and it draws water from deeper aquifers below the rocky layers. Checking the water level in a tube-well is pretty difficult.

Delegations from many other city corporations have come to Belgaum to study the well revival success story.

About 300 to 400 wells still exist and these could be rejuvenated. There could be some other filled-up public wells too. One great advantage for Belgaum is that tube wells are very limited in the city. And while awareness about water harvesting is currently low, there is good scope for reviving most of the private dug wells by harvesting the rain each family gets over their site.

Delegations from many other city corporations have come to Belgaum to study the well revival success story. Among them were the ones from Kolhapur, Dharwar, Mangalore and Mysore. Though every delegation hailed this success, no efforts seem to have been done in their respective cities on these lines.

R S Nayak says efforts from the administration alone won't do. He points out that open wells are as sacred as a place of worship, and that years of efforts are behind the revival. "Minutes would be sufficient to spoil them again," he warns. "It is not enough if only the administrations take care about this. Water bodies are the assets of local communities. They have shoulder the responsibility of protecting them too," says Nayak.

One pertinent plus point about this well-revival abhiyan is that it has helped to retain the ground water level high. If only Belgaum had opted for more bore wells, there would always been the question of unsustainability, and the ground water level, in this one decade, would have gone down considerably.