Colourful, crowded weekly bazaars are a regular feature of most localities in Delhi. Behind the obvious popularity of these bazaars, however, lie several hardships and insecurities - issues the sellers must contend with regularly.

The Friday bazaar at Mata Sundari Road is relatively new and has been running only for the past 4 years. From utensils and clothes of all shapes and sizes to cosmetics, plastic ware, small household hardware and artificial jewelry, the bazaar seems to have a lot on offer. Sonu, a seventeen year-old from Trans-Yamuna who runs a hosiery stall at the Friday market - he's been doing this for 2 years now; his father has operated such stalls at various markets for two decades - visits the other markets during the rest of the week. "This Friday bazaar here is tiny in comparison", he says. "20% of the people here come from surrounding areas whereas the rest come from Trans-Yamuna area".

Most vendors are apparently satisfied with the present system of allotment of space  which involves no documentation and is secured by a ten-rupee note every week to the men on beat. "There are about 400 vendors here; that means the police and MCD-wallahs (from the Municipal Corporation of Delhi) rake in Rs.4000 every week. But they do not collect the money themselves. Instead they send a local goonda to do this for them. He siphons off most of the money, and very little reaches the beat officers and others at the police station. But as long as we pay Rs.10 each every week, nobody bothers us. In South Extension or Greater Kailash, the profit margins are much higher and the police on beat increase their hafta accordingly," observes Sonu.

While the MCD-Police nexus still gets away with pockets-full of haftas, the vendors are left with legislative, economic and geographical insecurity. They can make no claims to space and/or rehabilitation.  •  Old books in old lanes
•  Bribes, beatings and blackmail

How can the weekly bazaars often sell goods at considerably lower prices? Are the products fakes, or illegally obtained? Sonu insists this is not the case. "This is a poor locality. People cannot afford to buy things from regular shops. However, the things we sell here are not sub-standard. Our goods are relatively cheaper but we do not necessarily buy them at lower prices. Our goods cost as much for us to buy as the goods at any regular neighborhood shop. But we compromise on the amount of profit we make. We are ready to sell our goods at less profit and thus they turn out to be cheaper. But we usually do not compromise on quality".

Most people setting up stalls at weekly bazaars often adjust their rates according to the locality they happen to be in. We are usually in a different location every day. But on Sundays, a visit to the Old Delhi Chor Bazar is a must. People from all over Delhi and even from Agra come to Old Delhi on Sundays, Sonu adds.

Indeed, the so-called Chor Bazaar at Old Delhi does seem like a Mecca of sorts of weekly bazaars. What is otherwise a chilly Sunday morning days before Diwali feels like a dry June afternoon with an unrelenting traffic jam and overwhelming masses of people creating noise and fury quite atypical of ones vision of a lazy Sunday. The bazaar is arguably Delhis largest weekly patri bazaar and boasts an incredible 10,000 pavement shops. Until about 5 years ago, the Chor bazaar used to be located behind the Red Fort. Due to security reasons, its location was shifted. The bazaar now starts in the Darya Ganj area and extends up to Jama Masjid. The bazaar has both new and old goods on offer: with books, hosiery, shoes, clothes, toys, electronic spare parts standing out among the rest. 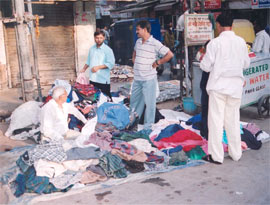 Shahid has been selling T-shirts on his small wooden cart for over 10 years now. He sells new shirts only since it is harder to sell old stuff. Space allocation as such is not a problem. We just have to pay Rs. 50 to the police every month. But of course, this space is not enough. This area is very crowded and customers can hardly see the goods on offer. During the rest of the week, we set up our stalls in front of the Red Fort. For that we pay only Rs. 20 for each day, offers Shahid.

Over to a shoe stall. We buy our shoes directly from factory outlets and showrooms. The factories reject shoes with even minor defects, which we buy at lower prices, repair them at home and then sell them at a nominal profit. Some customers dump shoes back to the shops after they discover some fault in them. These shoes are relatively new and we buy them and process them like the rejected ones. This is beneficial for the customer since a pair a shoes which would have cost her Rs.1500 costs her only about Rs.150 after this cycle of rectification that we undertake, says Suraj while his colleague, a young girl of barely ten checks the authenticity of a 500-rupee note handed over to her by a customer by holding it against the sun. Surprisingly, about twenty hawkers at Chor Bazar buy their stock of shoes at the wholesale shoe market in Agra, and another twenty bring them to Delhi's bazaars.

Their next-street neighbours at the Sunday Old Book bazaar at Daryaganj aren't so sure that enterprise alone is the reason for Chor Bazaar's success. According to Mr. Subhash Chand Agrawal, President, Sunday Book Bazaar Patri Welfare Association, 25% of the vendors at the Chor Bazaar sell goods which they steal from here and there. Very often, we take off our shoes on the pavement to display the books on the plastic sheets. By the time we finish displaying the books, our shoes are no longer there. These rogues take advantage of the overcrowded area and lay their hands on everything they can. This is how they earn their living". He concedes, nonetheless, that "most vendors at the Chor Bazaar are genuine ones and sell old or new stuff which they acquire through various complicated supply chains."

While the hawkers are generally happy with the zero-documentation method of setting up stalls, they resent having to shift from the spacious area behind Red Fort to their present location. "Earlier we had enough space. Each one of us had a space of about 10X10 ft. to display our goods on the ground. Here we barely have 4X6 ft. Despite the problems, though, the market has survived in this manner for centuries, yet nobody seems to think of the losses and trouble we have to bear because of rain, cold, and traffic jams", offers Suraj.

Ideally, vendors at all weekly bazaars should possess tehbazaari licenses granted by the Central Licensing and Enforcement Cell of the Municipal Corporation of Delhi (MCD). According to a circular released by the MCD in 1999, the basic principle for the grant of tehbazaari is to allow some people to earn their livelihood in a particular manner so that certain goods are available at competitive price to the consumers at nearby places of their residence. The tehbazaari fee, accordingly, is fixed in a manner, which is commensurate with the price of the nearby shops but less by a certain factor.

However, neither the MCD nor the vendors are too keen on this formal permission. Both parties seem smug with the realisation that the sheer number of hawkers, vendors, and stall holders at such weekly bazaars would make any attempt at uniform regulation and licensing highly daunting if not impossible. The losers in the tacit bargain, quite expectedly, are the vendors at the weekly bazaars. While the MCD-Police nexus still gets away with pockets-full of haftas, the vendors are left with legislative, economic and geographical insecurity. In the absence of any official document from the MCD, the vendors presence at any weekly bazaar is outright illegal. They can make no claims to space and/or rehabilitation, should the MCD decide to chase them off their present location.

Even as fancy malls and shopping complexes continue to mushroom, the neighborhood bazaars remain a matter of neglect and dispute. But selective implementation of its policies by the city's civic bodies isn't about to put these bazaars out of business - they're popular and competitively priced, and for a significant section of the population these are the 'stores' that remain within their economic reach. The more the organised sector works in collusion with administrators, it turns out, the more important the unaccounted economy becomes.