The government is moving in the direction of greater focus and emphasis on the improving learning levels of school children. There are debates on how this is to be done, strategies to be used, and the measurements to be used. Last year's annual survey of education was an important in put to this process, writes Rukmini Banerjee.
06 October 2006 -

Universal elementary education is now a widely accepted goal, and the Government of India has already launched a massive nation-wide program of attaining it. The goal is also backed by dedicated revenue collections - from a 2% cess on all central taxes - to help the government fulfil its commitment. Broad support for this goal, however, could not diminish a harsh reality spotlighted by the Annual Status of Education Report, 2005. The nationwide survey of primary school-age children in rural areas showed that while enrolment in schools is already at a very high rate in nearly all the states, in most parts of the country, in-school children are unable to read fluently or do simple arithmetic operations and are several years behind their age-level benchmarks for learning . Our children are progressing through the primary school stage, moving from one grade to another, but we are unable to guarantee basic learning.

ASER 2005 contained only a few simple tests, but its execution was massive; it was the largest, uniquely participative household survey on elementary education in India ever done by non-government organizations and local groups. We reached 332,971 children in 191,057 households in 9521 villages across the country; in many states all districts participated. More than 20,000 volunteers from 776 local groups, NGOs, colleges and universities participated in this effort. Twenty randomly selected villages were surveyed in each of the 485 participating districts. In each village, the ASER team visited 20 randomly selected households and interacted with all children in the age group 6 to 14 in these households to find out whether they go to school and whether they can read simple text and do basic arithmetic. The household visit was usually on a Sunday or holiday. The team also visited the local government primary or upper primary school on a working day to observe teachers' and students' attendance and to see if water, rooms and toilets were adequate and useable.

Measurement makes a difference. The aftermath of ASER 2005 has showed us that the survey was an important input into the process of policy and practice.

I will not dwell on the findings here; earlier articles in this publication (see links in box) and in others have noted the broad contours of the findings. The gist of it is that basic learning skills - reading and arithmetic - of the majority of children are quite poor; most of them perform well below their grade level. This finding is not entirely startling; the focus on enrolment over the years has herded many children into schools - or something resembling such places - in most rural areas, but without a corresponding emphasis on what is taught, even the allegedly high-literacy states (like Kerala and Tamilnadu) are weak in actually imparting basic skills.

Reading fluency and the ability to do simple arithmetic operations is only the foundation. Much more lies beyond. By the fifth standard, we want our children to be able to read much more sophisticated books, solve mathematical problems of substantial complexity, know many things about the world in which they live, be able to express themselves confidently in words and in writing ... and much much more. The stumbling start they now receive in early schooling is unlikely to lead to these desired outcomes; the foundations of children's basic reading and arithmetic needs to be strengthened in the early grades in school.

The impact of ASER

Ashok Kamath noted, in his earlier article on ASER, that 'what gets measured gets done'. ASER will be conducted on an annual basis until 2010, and it is this continuing measurement of the national status of education that we hope will lead to progressive improvements each year. ASER 2006 must show a significant improvement in children's ability to read and to do arithmetic. Such gradual but steady improvement is the final measure of our efforts in building a more literate and capable society, with wide opportunities for all children. 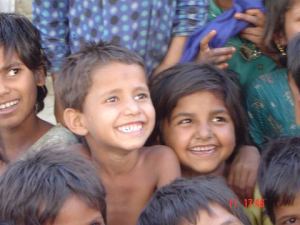 Picture: They're happy now, but how much promise does the future hold?

Do we see that change taking place? The ASER report was designed to generate a representative picture of children's schooling and learning status at the district level. The enormous and painstaking task of putting the ASER report together is only the first step. The national release was followed by a number of meetings at state and district levels across the country with government officials and citizens' groups to discuss the ASER 2005 findings and debate the next steps. Overall, the government, both at Central and State levels, is moving in the direction of greater focus and emphasis on the quality of education. There are national and regional debates on how this is to be done, strategies to be used, and measurements that need to accompany the moves for quality improvement. ASER 2005 was an important input into this process of policy and practice.

Several states - Tamilnadu, Bihar, Madhya Pradesh, and Uttar Pradesh - are focusing on remedial education on a large scale in this academic year; some have invited Pratham, which is coordinating the annual surveys, as collaborators in this effort. States like Karnataka and Andhra Pradesh are instituting state-wide quality improvement programs in primary school. Citizens' groups and non-governmental organizations have also taken a variety of different actions to improve children's educational status in their state or district. Here is a flavour of the changes taking place, from some states:

There has been a considerable impact from ASER 2005. A very wide cross-section of citizens across the country have become involved in understanding and strengthening elementary education. Perhaps it is kind of sustained engagement over a long time will lead planners, practitioners and policy makers to focus on the essential tasks of education in an effective manner. The ASER experience confirms our view that measurements linked to public information about outcomes are the key to engaging the entire gamut of role-players to improve the education system. The challenge is to infuse this engagement with continous improvement, so that each year the survey finds learning measurements to be higher than those of the previous year.

ASER 2006 will be carried out in October and November this year. This time, we will attempt to cover all rural districts in the country. In addition, there will be an urban sample as well: we hope to be able to cover about 40 of the major urban centers in the country that have a population of a million or more. As before, children will be assessed on basic reading, writing and arithmetic. In addition, those who can read fluently will be asked to read a passage of text to demonstrate their comprehension, and answer some questions as well. Another new feature of this year's effort is the attempt to assess mothers' reading ability. The same 20 villages in each district from ASER 2005 will be visited. In addition, a new set of 10 villages will be added to the survey.

Dr Rukmini Banerji works with Pratham (www.pratham.org). Pratham invites an even larger number of people to join the effort for ASER 2006. Interested persons can participate in the survey, or support the survey work financially (it costs Rs.30,000 per district), either in part or fully. Dr Banerji can be reached at aser@pratham.org.