Assessment to action: The example of ASER

With data available for several years, comparative report cards can be created to look at the performance of states across the country and of districts within a state. Rukmini Banerji and Wilma Wadhwa look at the example of ASER in education.
06 February 2008 -

One of the key challenges of development in India today is how to translate policies into practice. There are large scale social sector programmes in health, water, sanitation, livelihoods and education. Plans and provisions are made and in most cases, government machinery has the primary responsibility of delivering basic services. Several questions can be asked in this context: (a) what is the basis on which implementation plans are being made? Within the broader framework of state provisions, to what extent do these plans reflect local needs and gaps, (b) how can progress be reviewed in a meaningful way so that the next round of planning and implementation takes into account progress and bottlenecks of the past year.

For making plans, we do have information. But current, reliable information at the right level of dis-aggregation and useable by ordinary people within government or outside is rare. On the one hand, most government departments generate a large amount of data from village level upwards. This data often is voluminous and hard to digest quickly. On the other hand, there are surveys like the National Sample Survey that are professionally done but do not provide district level estimates. Academic studies abound but they are not comparable across locations. What is needed is a basic set of measures and rapid rigorous methods. The information that is generated should be simple to analyse, understand and integrate meaningfully into the planning and implementation process such that it leads to accountability as well as better strategies for action.

Current, reliable information at the right level of dis-aggregation and usable by ordinary people within government or outside is rare.

In the elementary education sector, since 2005, ASER (Annual Status of Education Report) has been an interesting nationwide example of measurement of outcomes by local people. Each year, a massive effort is carried out across the country. This exercise, facilitated by Pratham, attempts not only to provide district level estimates of enrolment but also of the status of basic learning. Further, ASER involves over 500 organisations and close to 20,000 volunteers who visit more than 16,000 villages, over 300,000 households and close to 715,000 children. Using a common set of tools and a common sampling frame, in each rural district, a local group visits 30 randomly selected villages. Within each village, ASER volunteers meet all children (in the age group 3 to 16) from 20 randomly selected families. In each household, children are asked whether they go to school and if so what type of school. In addition, children of school-going age are asked to do a set of simple reading and arithmetic tasks.

ASER information is compiled at the district level and then aggregated to generate state and national level report cards for the state of schooling and learning. The entire effort covers all rural districts in the country and is carried out from start to finish in about 100 days. In India, it is perhaps one of the largest initiatives focused on children in which local citizens participate each year to understand the progress (or lack of progress) in elementary education. ASER 2007 was released by the vice chairman of the Planning Commission in mid January this year.

The ASER report cards focus on basic indicators of schooling and learning. A core set of indicators are kept the same year after year. Now with data available for several years, comparative report cards can be created to look at the performance of states across the country and of districts within a state. 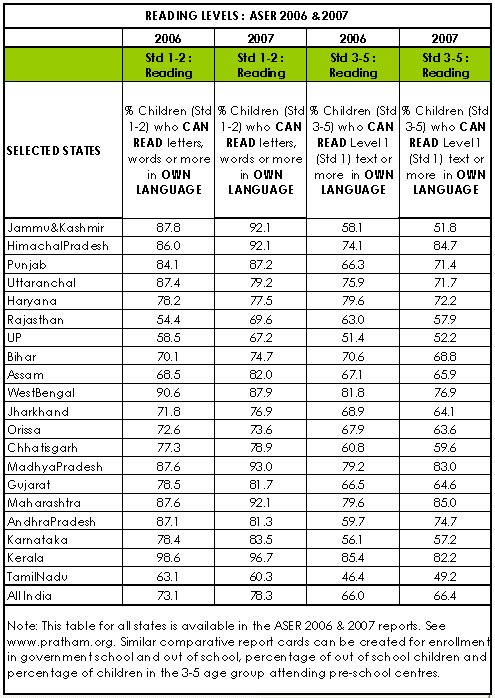 Three years of ASER experience have led to several important learnings. First, there is growing evidence of widespread use of ASER-type basic tools and simple methods by government and non-government groups for measuring outcomes. These are being used for universal coverage at village/school or panchayat level and on a sample basis at block or district level. Whether governments agree or disagree with the findings each year, ASER does serve as an annual temperature taking process to ascertain the overall health of the education system. The outcome orientation of the ASER exercise provides a useful counterfoil to the district level school report cards on provision and enrolment brought out by the government.

Second, the continued involvement of local groups in the annual assessment processes is leading not only to a more nuanced understanding of the situation but also to supporting solutions. For example, institutions of higher education like Jammu University, Kashmir University, Himachal University, IIT Roorkee, Manonmanian Sundaranar University in Tamilnadu, colleges in Punjab, West Bengal, Sikkim, Meghalaya, Assam, Manipur and in other states have been involved in this effort for the past few years. In 2007, in a welcome move, the DIETs (the government district institutes of education training) in Andhra Pradesh have came forward to take part in ASER as a way of preparing future teachers to understand the ground realities in their district.

Third, each district in the country submits an annual work plan for Sarva Shiksha Abhiyan. In past years, these plans have reflected physical and financial targets for civil works, teacher training and other such inputs. Increasingly, among other factors, the findings on learning outcomes from ASER are leading states and districts to allocating specific expenditures to improve teaching-learning.

More than anything else, ASER represents the potential of the country, citizens and government alike to work productively in assessing, planning and reviewing progress towards the achievement of universal enrolment and learning in elementary education. Even more exciting, is the possibility that the example of ASER in education can be replicated in other areas, so that continuous improvement becomes the norm in every area of public service delivery.

Rukmini Banerji is with Pratham. Wilima Wadhwa is an econometrician. Both have been associated with ASER from its inception.

BACK TO SCHOOL : Meaningful restart of education is critical
MORE ARTICLES
on similar topics ...
EDUCATION