HIV-positive children in Assam and their families need more than the usual measures of state support for their economic, medical and social needs. Ratna Bharali Talukdar reports.
26 September 2011 -

No one noticed the boy when he entered the room where media persons were interacting with parents of children living with HIV/AIDs. These families had gathered in Guwahati to draw attention to the problems faced by their children and others like them. The interaction, organised by World Vision India, included moving tales of struggle - particularly for the children. The boy suddenly stood up, confidently sought permission to say something before the gathering. What he stated eventually grabbed the attention of the audience.

"My name is Dristanta Saikia, and I am a positive child. I study in class V in Pani Dihingia Prathamik Vidyalaya of Golaghat district in Upper Assam. I am here with my mother to say that I have never tried to hide my identity of positive status from my schoolmates and friends. My mother too, is a positive widow. I have also been able to make my friends understand that I will never be a possible threat to them in terms of spreading any disease. Now I can easily mix up with them, take part in all the games and other regular school activities. This is how I am living my life," he said.

He also described how his innocent mother Nabanita, a village girl, was married to a man who was later found to have AIDS, and how the mother and son had to come back to her paternal village after the death of his father. By the time they returned, both mother and child had already been transmitted the disease. Nabanita is now a member of Assam Network of Positive People an activist of stop AIDS campaign in the state.

"I do not know how long I will be able to live. But if I live I want to be a doctor to help positive people in this world," he declared amidst the pin-drop silence during the interaction. Dristanta was the only child to make such a declaration, among many others like him who had gathered there with their parents to speak publicly.

Barasa Patgiri is another teen living with HIV/AIDS, in Marigaon district, who also has a positive story of struggle to tell. A daughter of a positive parent, who lost her father, a CRPF Jawan, she became an AIDS patient when she was only six years old in 2002; Barasa faced all kinds of stigma and discrimination at school and in society as well, but finally successfully passed her 10th standard examination this year. A classical dancer and a student of Class XI at a junior college in the district, Barasa is now preparing to be a lawyer in the future.

The bravery of Dristanta and Barasa, and their determination to fight the stigma and discrimination they confront is admirable. But their stories are uncommon; hundreds of other children live with HIV/AIDS in Assam and other northeastern states in pathetic conditions, without an effective state policy to address their rights to food, health and education.

Even for such exemplary children as Dristanta and Barasa, the challenges remain. Their mothers do not know how they will find the money that will be needed to given them a nutritious diet - which is crucial for survival for people living with HIV/AIDS. As for dreams of college and careers, that too seems financially out of reach. The state education policy only provides free education for children up to Class VIII, under the Assam Sarba Siksha Abhiyan Mission in government-run schools. 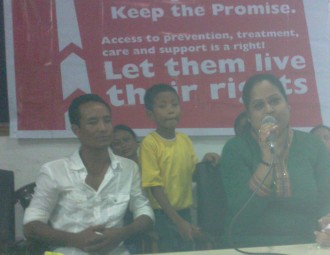 "My daughter has almost lost her childhood. I have to withdraw her from her previous school as some teachers treated her almost like an animal, used abusive words and separated her from all the group activities," says one parent.

Barasa's mother Janti Patgiri, an Accredited Social Health Activist (ASHA) supervisor with the National Rural Health Mission, is among the few privileged to have a job and a pension for her late husband. But that is not enough. In 2001, when her husband was diagnosed with full-blown AIDS, Janti hardly knew what the illness is. She was called to Ranchi where her husband was posted, and the authorities tested her as well. She too, was declared HIV-positive. One year later her husband died. The rest of her story is similar to that of thousands of HIV/AIDS widows.

"I am however, fortunate to have my husband's pension which is Rs.5000 now. Additionally, my job fetches me another Rs.3500. But, this is a very small amount if you consider the costs involved in medicine and to maintain a healthy life for me and my daughter. At times we cannot even manage a nutritious meal," says Janti, an active member of Assam Network of Positive People. The case of Dristanta's mother Nabanita Saikia is similar; she strongly spoke of the need for a special education policy, as well as a support system for HIV/AIDS widows.

Other children, whose parents are afraid to disclose their positive status for fear of the discrimination their children might face, are in an even more hopeless situation.

"My daughter has almost lost her childhood. I have to withdraw her from her previous school as some teachers treated her almost like an animal, used abusive words and separated her from all the group activities for fear of spreading the disease to her friends. This is the reality, and no one can avoid this. If people adopt a stubborn attitude of not having a scientific temperament, no one can help," said another widow from Nalbari district who did not want to disclose her name.

This young mother, absolutely illiterate, and abandoned by family is still fighting for a livelihood to support herself and her minor child. Like most other HIV/AIDS widows she too became a victim of the dreaded disease passed on to her by her husband - to whom she was married with her parents' consent, but without knowing that her husband was suffering from the disease. After his demise life has been almost like a hell for this mother and child without any support.

"In India almost 80 per cent budget spent for HIV/AIDS focuses on AIDS prevention and awareness campaign. Only 20 per cent of the allocation is actually spent for those affected or infected. This 20 per cent too is spent for health aspects, and no one considers things like the education of these vulnerable children, despite the constitutional right to education of every child," says Jahnavi Goswami, President of Assam Network of Positive People, the first woman in the state to have declared her positive status openly in early nineties - when she got to know suddenly that the virus was transmitted to her body from her late husband while she was pregnant. The baby girl that she had given birth lived only two years, and since then she has become a crusader for the stop-AIDS campaign.

Goswami says about 70 per cent of positive people in our country are widows - most of them aged between 18-25 years and having two or three children. And most of these people belong to a very low socio-economic strata, and are often illiterate. Most of them are also deprived of all the facilities that are Below Poverty Line (BPL) families are entitled to. Acquiring a BPL card, or getting a house under the Indira Awas Yojna is not easy, owing to both stigma and corrupt practices prevailing in the system, she says.

At times, even having a relatively better position can also appear to be a curse for some of these families. "If someone earns Rs.5000 a month her family is excluded from the BPL category. However, the hard reality is that the medicines alone for a person living with HIV/AIDS can often exceed Rs.3000 a month. A proper diet, education and other expenses have to be borne with what little money remains. There is no doubt that such families are also BPL", she adds.

In such a situation, children are bound to end their education after a certain stage. Getting to the higher grades in school, and going on to college are often mere dreams.

Goswami also points to other concerns. For instance, children with HIV/AIDS need to take their medicines at certain intervals, and this is almost impossible unless teachers extend their co-operation, especially to the youngest children. Normally HIV positive children are required to take their dosages every 12 hours. Immediately after taking the medicines, they suffer from drowsiness for some time. Mothers usually give them the first dose of the day before eight or nine o'clock in the morning, but this means that as school begins, the children feel drowsy, and cannot pay attention properly and end up being rebuked by the teachers during these periods. And when parents do not disclose their positive status for fear of stigma and discrimination, things become worse.

"The government's emphasis on AIDS education is entirely on educating children about AIDS during adolescence, to prevent them from any wrongdoing during this period. But sensitising teachers in primary schools is also very crucial" says Jahnavi.

There are two categories of affected children - those who are themselves infected, and others fortunate not to have received the illness through transmission from their HIV-positive mothers. But this difference often means nothing in society - where children are treated badly even if only their mothers have the disease.

Can a special school only for HIV/AIDS-affected children be a practical solution? Goswami rejects the idea, saying this would further aggravate the isolation and discrimination. However, what is important immediately is to set up a rehabilitation center for AIDS orphans, who are left practically without care after the death of their parents. Two such children have already died.

"AIDS orphans also cannot be placed with other orphanages as they may suffer from diseases like tubercolousis and other disease which can be a risk for other little children living in these orphanages" Goswami adds. There may be a silver lining on the horizon. The Health Department of Assam has agreed to run a rehabilitation center primarily for these children, at a recent meeting between the state Health Minister and representative of Assam Network of Positive People.