Much has been said about India’s success in containing the spread of the AIDS epidemic. But can it build on the progress so far and ensure that survivors receive the dignity and social security they need? Pushpa Achanta’s conversations on the eve of World AIDS Day aren’t heartening.

“I am the only one in the immediate family who is aware that John is HIV positive. We discovered this when he underwent medical investigation probing reasons for the loss of his body mass and frequent illnesses at Bowring hospital in the city of Bengaluru. After that, his wife left John, taking their three-year-old daughter along. He spends time with his daughter now and then,” reveals Neela Mary, a barely literate lady in her fifties about her nephew John Sundaresan, a frail man aged around 30 and with a fairly low CD4 count (lymphocytes in the blood below 200 instead of being over 500).

Neela’s daughters are married and live with their respective families a few kilometres from where she lives with John in a separate single room house. Neela is among the few close relatives that John has. “As he is unable to do much work, I continue to earn a living as a domestic worker. My earnings are insufficient for his treatment and the nutritious diet that John has to eat, which includes fruits, milk, eggs and meat. He also consumes alcohol regularly and does not take his anti-retroviral therapy (ART) medication in a timely manner,” says the lady.

It is sad but unsurprising that Neela and John have to keep the HIV status of the latter, a secret, owing to the possible social stigma and ostracisation that he might face. While his wife apparently left John due to his irresponsible nature, it is unsure whether she has been tested for HIV although her little girl fortunately does not have HIV.

Whatever the circumstances, it is inhuman that a financially disadvantaged person like him should have to pay for the treatment and medication, most of which is supposed to be given free or at a highly subsidized rate especially in government hospitals. However, these institutions are infamous for redirecting patients to pharmacies outside citing the absence or shortage of stock. Sometimes such retail outlets are located close to the government hospitals giving rise to the suspicion that there is an informal understanding between the pharmacy within the hospital and the one operating outside.

Doctors are also known to refer patients to specific diagnostic centres with which they are likely to have a profit-sharing agreement. These instances not only depict blatant violations of the rights of patients but also affirm that corruption in the sector is rampant and daringly overt.

John and other male HIV positive patients who are admitted to the Bowring Hospital, are confined to a separate ward in the hospital which is a violation of their rights of confidentiality, non-discrimination and dignity and against the relevant policy. Similarly women who are HIV positive are kept in a different ward. 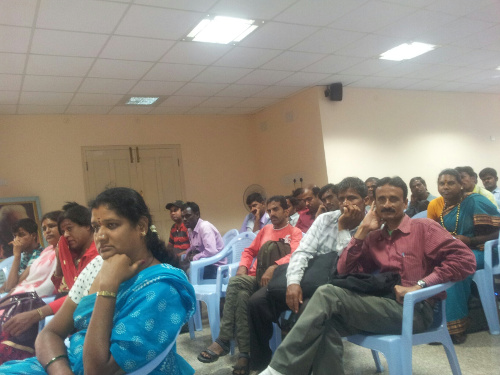 The link between the staff at the ART centre and resident patients is quite weak, owing to which follow-up of the patient’s condition is tough. Apart from the above, HIV positive patients admitted to Bowring Hospital are served only two meals per day. In the ward assigned to them, there are no facilities for drinking water.

In an extremely stirring instance, Mangala Devi, a 22-year-old lady who was in the ninth month of her pregnancy was admitted to Bowring hospital a few weeks back, when she complained of stomach ache. On discovering that she was HIV positive, the members of the staff moved her to a small room situated away from the maternity ward. That room has a platform in place of a cot and can be accessed only by a steep stair. There seemed to be no reliable record of Mangala’s admission and this writer was able to meet her only after making several inquiries with nurses, security guards and janitorial assistants and after searching through a number of wards spread across a maze of corridors with poor lighting and ventilation.

“As I have no support from my immediate family, I work and live at a non-profit organization on the outskirts of Bangalore that provides palliative care to people with terminal illnesses. I was brought to the hospital by a caregiver and have been confined to this room since. The doctor, nurses and others here pay minimal attention to me and I find it difficult to call out for help and wonder if anyone can hear me from here,” Mangala tells me.

Vijayakumari T, a 37-year old transwoman who does sex work on a part-time basis shares her story: “One of my friends, Pratibha, who is an HIV-positive transperson goes to K C General Hospital to collect her supply of ART medication or for routine blood or others tests; she has often complained of facing discrimination from doctors and paramedics. I witnessed this myself when I accompanied her and objected to the behaviour of the hospital staff towards her. Although they did not like my intervention, they have become more responsive towards her.”

Insensitive attitudes such as this, while not uncommon, are nevertheless shocking and unacceptable considering that it is a well established reality that HIV is not spread by physical contact with a patient or any of the items that she or her touches. Transpersons find it difficult in any case to be admitted to a hospital or use washrooms when required because those places are designated only for women or men. In addition, some people presume that sex workers and transpeople or members of their families are HIV positive, by default.

And then there is Rehan Ali who is in his early twenties and has an alarmingly poor CD4 count (under 100). In addition to that, he has watery eyes and failing vision (HIV positive persons are likely to have or be susceptible to various ailments as their overall immunity could be low). However, his parents passed away a few years ago and because of the economic challenges before the family, he was earning a living in the informal sector until his health became fragile.

Rehan’s two older sisters Shabana and Mubeena, who live with their young children and are employed as domestic workers are the only family members who care about Rehan’s well being. But they do not have enough resources to support his palliative care. Further, there is hardly any space in their small house and they fear that if their neighbours get to know that Rehan is HIV positive, they will not be allowed to live in that locality primarily because of the stigma associated with the disease.

When the Government of India introduced the National AIDS Control Programme (NACP) in 1992, it aimed to eliminate or at least make the occurrence of the HIV/AIDS as low as possible. It is tragic that neither of these objectives has been fulfilled even after more than two decades have passed. 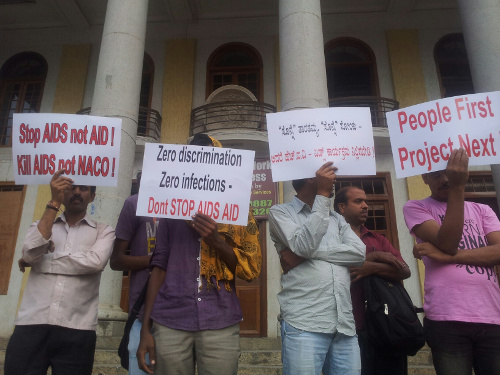 In addition, the National AIDS Control Organization (NACO) which falls under the Ministry of Health and Family Welfare (MoHFW) announced last year that it would not support the NACP independently beyond 2017. Further, the MoHFW reduced the HIV/AIDS prevention and care budget by around 20% for 2015-’16. But this does not seem to be based on any credible evidence that the incidence of HIV/AIDS has decreased to the extent that there is much less or no need for any proactive interventions to stem the spread of the infection.

As a matter of fact, it is feared that the progress that has been made in containing the disease while assisting the care of those already infected may be reversed due to a step such as this.

Persons in decision-making roles in NACO and its associated units in the various states of India often focus only on data such as the number of condoms distributed. They are not aware of the ground realities of those infected with HIV or the population at risk.

Bula, a sex worker and peer counsellor from southern Karnataka said a few years ago, “Although I have learnt about the importance of using condoms especially to prevent sexually transmitted diseases (STDs), it has been quite a challenge to request my clients to practise that due to their personal preferences and their lack of sufficient knowledge about STDs. Moreover, when I counsel, there is a danger of losing clients, facing backlash from peers and other persons in sex work.

Sometimes, sex workers try to avoid me and other counsellors as they believe that we pose a risk to them. But the programme managers in Karnataka State AIDS Prevention Society (KSAPS) seem to care only about statistics, reports and their professional advancement. Otherwise, they would devise some measures to ensure our safety and well being”.

It has been learnt from reliable sources that at least 300 crore rupees are being diverted to the Swacch Bharat Abhiyan and the funding of the NACP will be merged with the rest of the health budget. This implies that the NACP will most likely be dissolved after 2017. Consequently, preventive, diagnostic and counselling activities (which must extend to HIV positive persons as well as their caregivers and/or family members) and the ART, which includes medication, monitoring and relevant treatment, will be affected adversely.

Many HIV positive persons and their allies are demanding that the NACP be extended until 2022. The state should consider providing support for this crucial programme as its privatisation would make treatment and follow up exorbitant and prohibitive.

If the state, health care professionals and society continue to alienate and neglect people with HIV/AIDS and their supporters, their situation is likely to worsen until it lapses back into epidemic proportions.

NOTE: Personal details of people in this story were changed to ensure confidentiality

TIGER SANCTUARY : Are tigers back at the Buxa reserve?
MORE ARTICLES
on similar topics ...
AIDS