Not your land anymore

Adivasis in the Thane region face official as well as illegal efforts to separate them from their lands, which are increasingly in demand to meet growing urban needs. Freny Manecksha reports.
29 November 2012 -

On 5 October this year, Lachmi Sukharam Bujad, a widow from Aina village in Maharashtra, joined a huge rally of over 6000 adivasis at Dahanu to protest against increasing land alienation. For Lachmi the threat came from a land mafia that operates through a chain of dalals (middlemen) and embedded locals. They target vulnerable people like Lachmi, who lives with her sister-in-law and mother-in-law, both of whom are also widowed.

The absence of adult male members emboldened Raghunath Dabka, a local, to encroach on their uncultivated plots by erecting a boundary. Suspicions were further aroused when he began bringing strangers to view the lands. Dabka's own cousin fell victim to this; he said attempts were made to grab his land too, and that he was forced to borrow Rs.9000 to get a land survey done and file a case.

Like Lachmi, thousands of adivasis face serious threats of their livelihood resources being converted into real estate, especially in villages that adjoin urban areas. These and several other reasons for the alienation prompted them to participate in the rally organised at Dahanu, Thane district, under the aegis of the Kashtakari Sanghatana, a movement advocating rights of the tribals.

Maharashtra is home to the second largest population of tribal people in India, and Thane district has witnessed historic tribal revolts dating back to pre-independence days. It was in the beginning of the 19th century that adivasis, the original inhabitants, found their lands were expropriated by money lenders, traders and contractors. Land alienation and the notion of land as a saleable commodity was abetted by colonial legislation. Adivasis faced such serious exploitation that by 1935 hardly five per cent of cultivated lands were in their hands.

It was under the leadership of communists, Shamrao and Godavari Parulekar in the 1940s, that the Warlis, the predominant tribal population in the region, were organised under the Kisan Sabha. A strike demanding higher wages for cutting grass was called in 1944, and subsequently the agitation was broadened to incorporate new and vital issues regarding land and the forests. 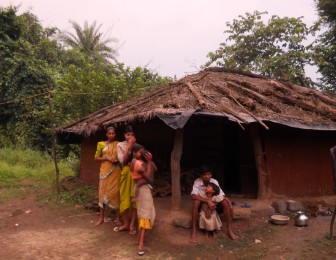 It is incumbent on the Collector and concerned panchayats to send applications for sale/purchase of adivasi lands to the gram sabhas, but this law is being flouted. (Pic; A simple adivasi home in Aina village. Escalating realty demands are fuelling the land grab near Dahanu.)

•  The Great Betrayal
•  Plentiful, but for whom?

The successful revolt of the forties against land-racking triggered the flight of many landlords leaving the lands in possession of the adivasis. However, adivasis did not bother to get the lands recorded in their names because of various factors - ignorance, illiteracy or paucity of funds. Today they are victims of a fresh and more brutal wave of land alienation.

To many in the region, their meagre holdings are the last link to a self-sustaining life. Adivasis in the Thane belt get sustenance from cultivating their small plots for four or five months. They are then forced to migrate and work in brick kilns, salt pans or provide labour in the cities of Mumbai, Bhiwandi, Surat and elsewhere. Increasing alienation ill lead to distress migration and even lower levels of food security and health in a belt where malnutrition is common. Against this background, holding on to their lands is of paramount importance.

But that is increasingly under risk. Brian Lobo, an advocate and member of Kashtakari Sanghatan, says that the absence of records, along with administrative connivance, whereby everything is weighed against the adivasi, has enabled several original landlords and land sharks to move in. Increasing urbanisation, and the escalation of realty demands from nearby Surat and Umbergaon is fuelling this land grab.

At Ganjad, strategically sited in close proximity to the railway line and the highway, I heard several narratives of adivasis being cheated out of their lands. In one instance a poor adivasi was duped with promises of free alcohol for life! Another adivasi who sought the saatbarra (application 7/12, which is the basis of a land record) was asked by the village land officer why he needed it - a clear attempt at dissuading him.

Besides anecdotal bits of evidences the most visible manifestation of this land grab is in the increasing numbers of fenced-off plots that can be seen in the Dahanu sub-division. "Adivasis have little concept of private property. They never fence their land unless they are embedded in such operations," explains Pradeep Prabhu of the Kashtakari Sanghatan.

There are laws that have been framed to protect adivasis. Section 36(A) of the Maharashtra Land Revenue Code specifically prohibits transfers of property owned by tribals to non tribals, unless requisite permission is given. The Kashtakari Saghatan says that hundreds of applications for such legal transfers are pending with the Collector, and that large-scale approvals vitiate the spirit of the law.

Lobo points out that the provision under the Panchayat Extension to the Schedued Areas Act (PESA), which makes it incumbent on the Collector and concerned panchayats to send applications for sale/purchase of adivasi lands to the gram sabhas, is being flouted. Besides such legal alienation there are several instances of illegal transfers with powers-of-attorney being fraudulently obtained from adivasis, and benami transfers as well.

Another cause for land alienation is unrecorded tenancies. Shiraz Prabhu of Kashtakari Sanghatan explains, "In the 1930s, landlords used to issue receipts for cultivation on kharif lands - usually low flatlands used in paddy cultivation - and these were recorded. This was not done for varka lands - sloped lands used to cultivate grass, millets and used to prepare seedling beds. The omission of such receipts means that, large areas of land, in possession of adivasis, have remain unrecorded."

Another anomaly is that lands were traditionally recorded only in the name of the eldest son even though the others were also in possession of the land. A generation or two later the children of these siblings find that they are being cheated because the saatbarra has no record of their tenancy rights. Sandip Radhka Karbat of Ranshet village says he lost an acre and a half when his cousin sold off the land fairly cheaply to a non-adivasi in connivance with officials.

Village officials are required by law to inspect standing crops for revenue assessment (called peek pane) which can then be produced by adivasis as proof of tenancy and cultivation. But even after several applications, in many cases such crop inspections are not carried out, say the adivasis. A demand is now being made for an amendment to the Bombay Tenancy Act, whereby oral evidences of tenancy can be admitted. Such oral evidences have been deemed valid in the Ratnagiri and Sindhudurg districts.

There are other issues related to land displacement in the region, such as those pertaining to plots that come under the Forest Rights Act, and displacement caused by a proposed dam on the Susari river to provide water for Mumbai's suburban Vasai-Virar belt. Eleven hamlets will be submerged by the reservoir of the dam if it is built. And with it, say the locals, will go their hopes of clinging on to their lands.