With water run-off patterns in his area disturbed by the Forest Department's plantations, more bore wells being sunk, and pumping of groundwater turning multifold, a Karnataka farmer decided to build his own network for recharging ground water. Surprisingly for him, these efforts have revived his local stream. Shree Padre reports.
27 November 2007 -

Saru Dinesh, a young Karnataka farmer who had reluctantly decided to dig a bore well in his farm to save his crop, is a happy man now. Thanks to his intensive rain harvesting, he now confides: "We won't require a bore well in the future. If at all we face water shortages sometime, we will dig an open well. We are sure to hit water because we put huge amounts of rain into the land at higher elevations."

Water has always been plentiful in this Malnad region of Shimoga district. For Dinesh, a small stream, Adehalla has been the irrigation source for many decades. Water shortages first began a few years ago, when he newly planted areca plants in his two acre paddy field. The very same year, additional pumps totaling 13 horse power started lifting water from this stream, to help meet the needs of other farmers who had also taken up conversion of paddy fields into areca gardens in the upper catchment. Lower-than-usual rainfall that year, however, meant that for the first time that Dinesh could remember, the Adehalla dried up in April. In April and May that year, Dinesh couldn't give a single drop of water to his young areca garden. In the following years, things got worse; in 2004, the stream, which had seen year-round flow until about 6 years ago, dried up in the second week of February. 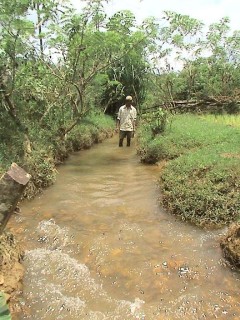 Picture: The Adehalla has been the main irrigation source for Dinesh's lands for many decades.

He also lays some of the blame for water woes in the region at the Forest Department. "Raising massive Acacia monoculture plantations in the hilly regions of the district is one of the main reasons for droughts. These plantations artificially divert the natural run-offs hap-hazardly. Instead of filling with crystal clear seepage water sources, our tanks now get filled with the muddy run-off. Man-made soil erosion is unchecked. The silt aggravates the problem."

For Dinesh, the lack of water for his garden posed an immediate problem. At the same time, he was reluctant to take the usual quick-fix route, and install a bore well. Being an environmentalist at heart, Dinesh, an organic farmer, had organised a rain harvesting awareness workshop in this village years ago. He had been advocating the harvesting of rain and was against digging more bore wells. Despite all this, to save his new areca garden from impending successive droughts, he decided that he must dig a bore well, however reluctantly. His wife Gayathri, as well as his friends, however, were also opposed to this idea. They asked instead, "Even if it is more expensive, why can't we dig an open well?"

Around the same time, Dinesh was also facing another problem. Applying fresh soil to areca gardens once in 2-3 years is a common practice here. Dinesh didn't have a suitable area in his land wherefrom he could dig up fresh soil to do this. Instead, he has had to truck it in from elsewhere, incurring both time and costs.

Acacia monoculture plantations raised by the Forest Department in the hilly regions of the district is one of the main reasons for water scarcity, says Dinesh.

At this juncture, a novel idea occurred to him. He decided that he would recharge the ground water in the upper reaches, in an effort to raise the water table and revive the stream. For this, he would construct percolation ponds in the higher portions of his land, and also use the space between his tress in some cases as contour trenches to percolate more water. At the same time, he would use the soil that was dug out to create the pond for his areca farm.

He chose a strategic point in the adjoining hills, well above his gardens, for this. This is a converging point where run-off from the about 30 acres of catchment above passes through. In 2-3 years of digging, a huge pond was ready in about 12 cents (100 cents: 1 acre) of land. Two more small ponds were also created nearby. The first and second ponds are interconnected. The percolation ability of these ponds is very high; only continuously high rains for three days will make them overflow. It takes a fortnight for all the water gathered in these ponds to be fully absorbed by the ground below. Below these ponds, on the topmost area of his land, Dinesh has a 5-acre coconut garden. Between the coconut trees, he has dug nearly a thousand contour trenches. Each trench can hold about 750 litres of water. Below this coconut garden is rubber plantation. This also has contour trenches. These contour trenches would be additional rain harvesting locations for him. 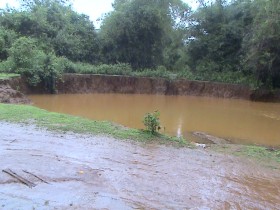 The Adehalla flows along Dinesh' farm for about 750 metres, a third of its total length. The stream is about three feet in depth and six feet wide. There is natural forest in its catchment. After Dinesh's intensive rain harvesting to recharge the ground water began, there have been many positive changes. The most important among them is that Adehalla hasn't dried up in the last two seasons. A neighbouring family downstream also didn't have any water problems during this time.

Just below the coconut gardens, there is also a deep cut in the land. For the last two seasons, with the stream back to strength, during the monsoon a considerable amount of water has been oozing into this cut. The family has a farm house nearby, so they installed two PVC pipes across the wall to harvest this additional source too. Throughout monsoon, clear water keeps flowing from these pipes. "This is a bonus for us. From June to September we have continuous water flow here. We use this for cooking, washing etc whenever we have activities around this farm house", points out Dinesh happily.

In the coconut garden just below the percolation tanks, green fodder is now available for six months. This has considerably reduced the dependence on fodder brought from outside. In the rubber plantation, many local species of plants like sandalwood, rosewood etc are germinating year after year. "Now, our farm must be very cool. I have been seeing a lot of rabbits, squirrels, snakes, mongooses and peacocks around. We don't trouble all these animals. To protect ourselves from snake-bites, the labourers and I wear gum boots", says Dinesh.

According to Dinesh, "Apart from harvesting rain, organic farming is also important to retain moisture in the farmland. Mulching plays a very important role. Using chemical fertilisers hardens the soil; its water holding and percolating ability goes on reducing." Thanks to mulching and rain harvesting in upper areas, Dinesh has managed one of his areca gardens with only two irrigations in a year. Earlier, he was irrigating it at least once in 18 days for 4-5 months. 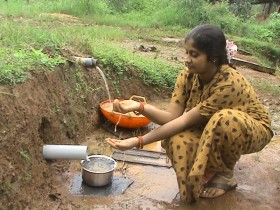 He also believes that a lot of farmers could make do with less water than they're using now, or choose crops that are better suited to lower water availability. "We are making excessive use of water. We don't try to understand the actual water requirement of our crops, before we decide what to plant. Increasing cash crops like arecanut, and extending cultivation to bagair-hukum (encroached) lands is depleting our water sources. The hills that should have caught rain water are now converted into gardens that have to be irrigated. If in a small hamlet like ours, a bore well drilling machine is continuously at work from March to May, you can guess the craze."

Looking back, he's glad he persevered to find alternatives to this craze. "Digging bore wells has turned into a status symbol. Instead of spending lakhs together for a gamble called bore well digging, it is better to hold a vessel to the sky. It is cheaper, sustainable and actually an act of social justice."