They make an appearance before every election with a basket of promises and some patchwork to impress the electorate, only to disappear after the results. As Chennai prepares to vote on 24 April, residents tell Lavanya Donthamshetty how tired they are of such politicians, wishing for a leader with vision and the commitment to turn it into reality.

It is hard to miss the election talk that has permeated through every thread of the society. At the corner shop, during the auto ride to the market, at the school gates, waiting in line to buy milk, paying off the parking guy at the beach – the elections and what it means to Chennai life is the 'trending' topic now.

So what do the people of Chennai want from their leaders?

There is a general air of discontentment that is widely prevalent, a feeling of “meh! As if anything's going to change!” that is common to Chennaivasis from across the spectrum. From daily-wage earners to the comfortable upper middle class, not many believe in the lofty promises being made by the candidates campaigning for their votes. This isn't their first rodeo after all and they have trusted and been let down, time and again -- too many times to naively believe in anything being said now, in this mad scramble for votes.

While personal safety and security has improved considerably under the present regime, as has the electricity situation, there are certain basic issues that still remain the same. Many feel that the city is getting increasingly dirtier steadily and there's nothing constructive that is being done about it. Many areas lack basic infrastructure such as good roads and water.

Take a look at the city of Chennai and you'll see an Indian metropolis like any other. Congested, teeming with people, cars, bikes, cows and street dogs, suffering from the same issues – lack of basic amenities, uncaring officials, wide-spread corruption and a general feeling of helplessness. Every four years, they are promised the Heaven and everything else if they just vote X into power and that is the last they see of him.

The roads are still ridden with holes, their local parks, if they are lucky enough to have some, are full of broken down and unsafe play equipment, the electricity supply still plays fast and loose and come summer, they still have to harangue and beg the Metro Water tankers to come and fill their sumps with water. 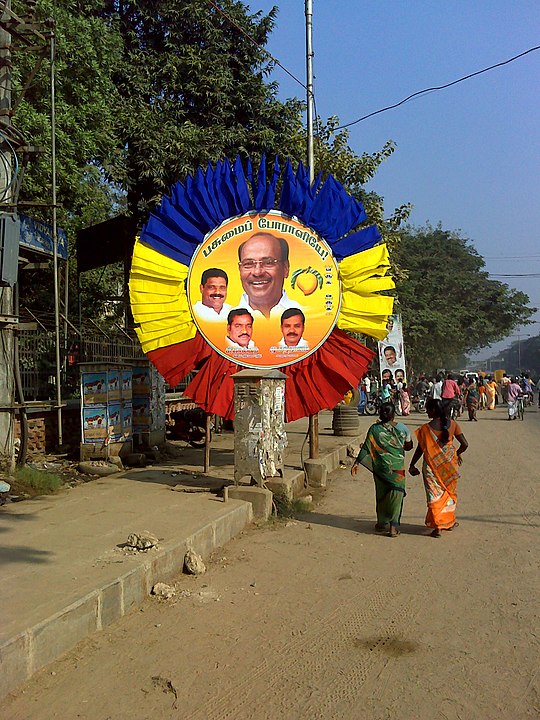 A political poster by a street in Chennai before the Legislative Assembly Elections of 2011. Pic: Indu/Wikimedia

In fact, the average Chennaivasi has become rather adept at fending for himself. As Anna Nagar resident Sarah N, 35, told me: “you can buy water, you can get an inverter to sort out some of your electricity woes. But you cannot lay roads. That is all I require from my candidate – to lay quality roads that don't wash up with the first rains and to maintain them .”

The results of a country-wide survey by Daksh-ADR reflect just this -- the people's need for bare necessities. This survey asked voters across the country to rank the issues that are of importance to them and to rate their MPs in terms of their performance in these issues. These were averaged to arrive at an importance score for each issue in a constituency, a performance score for the MP and an overall score in respect of each issue calculated on the basis of the above two.

For Chennai, the survey showed clearly the demand for better garbage clearance and drinking water. These two issues were ranked higher by voters in the city (with importance scores in the high 8's and 9's on a maximum score of 10) than environmental issues (a low 3.7 / 10 in South Chennai to a middling 6.0 in North Chennai) or even better roads (3.5/ 10 in South Chennai and 5.0 in Central Chennai) and security for women (4.7 to 6.8 / 10).

Many localities have seen a flurry of development taking place in the past few months, such as laying of new roads, the timing of which has not escaped even the most uncritical amongst us. Recently, the old tar roads in my neighbourhood were dug up and in their place, white and blinding concrete roads were laid. Barely after a day, the smooth surface of the new roads were marred by gaping holes, which were later covered with sand, to make access to the drain covers easy.

And as if to prove that not everything had been planned correctly, a gigantic tree around the corner came crashing down late Sunday night. A Kalakshetra colony resident and senior citizen grumbled to me at the early hours of Monday. “This is our system – lay concrete roads but pay no heed to the roots of the trees that give us shade. Of course they come crashing down! This one must be older than me!” he muttered even as he took the long way around.

Roads or trees, what do you need more of?

Local lawyer Pavithra is very clear about what is the need of the hour. “We need someone with vision – not just vision but with the ability to get things done.” Sounds quite simple, doesn't it, except that isn’t.

Pavithra elaborates, “Take a look at the roads in the area. They are flanked by too-wide pavements that have put paid to previously existing parking spaces. You cannot go grocery shopping to Nilgiris and park your car outside anymore, because the bays don't exist and the pavements are now home to make-shift knickknack shops. What is the point of these wide pavements anyway? It isn't as if they are safe for cyclists to mount and dismount safely.”

“We need someone who will respect us not just when it is time to cast our votes, but at other times too, Madam. But I don't think that will ever happen!”, grumbles one auto driver, as he takes me across the city. “I live in Guduvancheri and ply my trade all over South Chennai – all I want is a government that values me too. We were promised free auto meters when we upgraded but that wasn't so. We had to pay for our own meters and we got substandard ones, meters that break down when we drive over pot holes. It isn't as if we can avoid pot holes in Chennai, madam! Then the customers complain that we are rigging our meters and the traffic cops seize our vehicles and we have the devil's own time of recovering it!”

But surely public transport has improved significantly, what with the fleet of mini-buses connecting the far flung reaches of the city's innermost areas to the main roads? Not so, explains Maheshwari, a nanny who works in ECR. “These buses travel on the back roads that are almost always in disrepair. As they generally take a longish route, we get bounced horribly and by the time we get off the bus, our body aches so! The bus stops are not laid out clearly so we don't know where to stop and wait for a bus – we generally see a bus and flag it down.”

Back to the basics

Radha Srinivasan, who lives not too far from Dayanidhi Maran's house in the posh Boat Club area of Chennai, is tired of all those that are politicizing religion. “I am looking for someone who will focus on larger issues like economy and infrastructure. Good governance sans drama, is all I want!” she says succinctly.

Sreekanth, a Chartered Accountant based in Purasawalkam, is also interested in the economic basics. “Strengthen the rupee and sort out the import-export disparity”, he states in no-nonsense terms, true to his calling as a number cruncher.

He adds,“A candidate must do whatever he can to improve the security for women, in order to secure my vote. Our womenfolk need to feel safe to go out and about – this is vital. Finally, as a society, what we need are more jobs, jobs that are provided on the basis of ability, not community!”

Employment is a concern echoed by almost every person I spoke to. People are tired of the quota system and reservation kickbacks. “Just let the best man get the job, I say”, says Mohammed, my local fruit seller. “Everywhere there is reservation but tell me this  – if our big-shot politician has to undergo an operation, who will he go to – the guy who is the best in the field or the guy who is a doctor thanks to his community certificate? The guy who stood first in his class, or the guy who scored 40 and is still around because of the reservation quota?”

First-time voters in the city are eager to exercise their brand-new power and are going in with no pre-existing notions. So who will they cast their votes for and what will it take for a candidate to secure their vote?

First-time voter and resident of Kodambakkam, Chandini is undecided. None of the local campaigners have impressed her enough to decide that this is the candidate she is going to vote for but she is clear on what she is looking for. “Someone who can bring about changes in the country; I won't cast my vote for someone that makes false promises,” she states firmly.

So how is this election any different? Why would they trust in the fleeting promises made by every politician that wants to rise to power?

Pavithra has the final word: “We know what the deal is. We aren't expecting miracles and frankly, we don't even expect to have a system that works. But we would just like to see improvement. We want to see someone who can make policies that are tailor-made for situations and problems, not haphazard one-size-fits-all policies. If a bin in a street corner gets strewn with filth, it calls for a simple fix: just increase the number of garbage bins!”

She also points to the need for departments that work in tandem with one another – contrary to the usual scenario where one department lays the road one week, only for the telephone department to dig it up the week after and leave a mound on the road.

To sum up, in Pavithra’s words, Chennai does not just need ideas, it needs someone that can implement them; someone who can monitor them properly. It needs a reformer.

People do not want smooth-talking, fast-disappearing politicians, who will say anything to get to the seat of power. They want results and they want them now. As the popular advertisement goes, no more “ullu banaoing”!

Lavanya Donthamshetty is a freelance writer based in Chennai.