A performance audit of the National Rural Employment Guarantee Act in Karnataka reveals delayed payment of wages, sometimes by three months or more, to nearly five lakh workers under the scheme during the period 2009-12. Himanshu Upadhyaya looks at the key audit findings and connects the dots.
18 September 2013 -

The performance audit report on the implementation of the Mahatma Gandhi National Rural Employment Guarantee Act (MGNREGA) in Karnataka was tabled in the State Assembly on 30 July 2013. An earlier article reviewed several anomalies, delays and variance with what had been originally envisioned in respect of planning processes, realistic labour budget estimation, registration and issue of job cards, monitoring mechanisms, social auditing and grievance redressal.

What stands out equally starkly, if not more, from the report are the performance audit findings related to payment of wages and compensation to workers employed under the scheme. The audit notes that in 2010-11, almost half of all payments made were recorded beyond the stipulated 15-day period and while workers should have been paid compensation for such delays, no such compensation was paid.

If one wonders why and how such a sad state of affairs came about, one only needs to look at the way in which Information, Education and Communication activities to empower MGNREGA workers about their rights have been undertaken by the state.

MGNREGA workers are entitled to being paid on a weekly basis, and in any case within a fortnight of the date on which the work was done. In case payment of wages is not made within the period specified under the scheme, workers must receive compensation as per the provisions of the Payment of Wages Act, 1936 with the cost of such compensation being borne by the state government.

Audit scrutiny of data extracted from the MIS throws up a significant number of cases where wages were paid after a delay of more than the stipulated period of 15 days. In the year 2010-11, delayed wage payments amounted to as high as almost half the total wages paid. During the years 2009-10 and 2010-11, a very high number of muster rolls showed payments of wages with a delay of more than 91 days.

The audit observes that though wages belatedly paid as a proportion of total wages showed a decline in the year 2011-12, the percentage still remained significantly high at 23 per cent. In its reply to this audit finding, the state government has accepted its failure.

MGNREGA researchers would perhaps do well to look at MIS data for the year 2012-13 and analyse the payment of wages reported therein to verify if the state government has merely stopped at acknowledgement of its failure or if it has indeed learnt any lessons from the above audit observation.

The CAG's performance review of MGNREGA implementation in Karnataka has also revealed that the state government had made no payments towards unemployment allowance. The Operational Guidelines stipulate that any person having a job card can apply for work to the Gram Panchayat in writing. On receiving such an application, which is also called 'demand for work,' the official shall issue a dated receipt to the applicant. In case work is not provided within 15 days from the date of demand for work, an unemployment allowance is to be paid to the applicant by the state government. 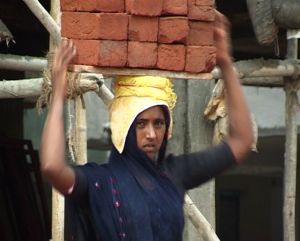 In a significant number of cases, wages were paid after a delay of more than the stipulated period of 15 days. In the year 2010-11, delayed wage payments amounted to as high as almost half the total wages paid.

•  Six months for a job card?
•  MIS=Too many mistakes

Audit scrutiny of MIS data showed that in a majority of cases, the demand for work had been entered as the same date on which the person was engaged as MGNREGA worker as per the muster rolls, or the preceding day of the engagement of worker. This pattern of data entry in MIS, accompanied by the conspicuous absence of what I term 'flesh and blood employment registers,' indicate the scope for manipulating the date of demand for work.

The neat records at the MIS level in a state where a beneficiary survey has seen many workers reporting delays of up to six months in acquiring a job card itself does seem to indicate that we can't take the MIS claims at face value.

In those relatively less number of cases, where the MIS data broke away from the pattern narrated above, the number of person-days for which unemployment allowance should have been paid to workers is as mentioned in the table below:

However, during audit scrutiny it was found that no unemployment allowance had been paid to workers, either as per MIS data or as per records in test-checked data.

It is worth looking at what the state government says in reply to this audit observation, in its communication dated January 2013. In its reply, the state government sought to argue that as per the Operational Guidelines, the question of unemployment allowance arises only when the labourer applies for it in writing. The state government also added in its reply that the whole process of record maintenance was being computerised now, which would resolve these issues.

The CAG however pronounced that "the reply was not acceptable, as the state government, instead of educating the labourers through Information, Education and Communication (IEC) activities, had taken shelter under the ignorance of the intended beneficiaries."

It would, therefore, be interesting to explore the amount of resources that the Karnataka government has spent from its MGNREGA budget on such IEC activities. The following is what the audit has to say on this.

The CAG performance review also noted that the financial management of the scheme was deficient, as monthly squaring and reconciliation of accounts at all levels was not being attempted at all. It also indicted the State Employment Guarantee Council (SEGC), Governing Council and Executive Council, stating that they failed to meet regularly. The SEGC had met only four times as of 31 March 2012, while the Governing Council had met only two times during the period 2009 to 2012 and the Executive Council had met only once since its constitution.

With a change of the guards, will things improve for MGNREGA workers in Karnataka in the year 2012-13? We will have to wait and watch, but meanwhile civil society organisations and MGNREGA researchers could go a long way by insisting that the Public Accounts Committee of the State Assembly takes up the present audit report for discussion soon.