HEALTH / RIGHTS OF THE DISABLED

India has ratified the UN Convention of the Rights of Persons with Disabilities, but done very little to protect the rights of the disabled in accordance with it. Freny Manecksha reports.
08 February 2010 -

The proposal by the Ministry of Social Justice and Empowerment to introduce 101 amendments to the Persons with Disabilities (Equal Opportunities, Protection of Rights and Full Participation) Act in the budget session has come under criticism. Several groups of disabled people, with whom the government has been holding consultations, have demanded instead a totally new law that is aligned with the UN Convention on the Rights of People with Disabilities (UNCRPD), which India ratified in 2007.

They say the proposed amendments are inadequate, and one must have a new law for the 70 million people with disabilities in India (figures according to civil society organizations) that contains everything in consonance with the Convention.

Prasanna Pincha, who works as an independent disability rights activist, explains why the UNCRPD is so crucial and how in the 21st century it has brought about a paradigm shift in perspective. "UNCRPD adopts a human rights approach instead of the earlier medical approach to disability. This is a shift from viewing people with disabilities (PWD) as objects needing social protection and medical care to seeing them as subjects having human rights, fundamental freedoms," he explains.

Currently in India there are four different laws pertaining to the disabled. These are: The Mental Health Act, 1987, the Rehabilitation Council of India Act, (meant to provide minimum standards in training and qualification for rehabilitation professionals) the National Trust for Welfare of Persons with Autism, Cerebral Palsy, Mental Retardation and Multiple Disabilities Act, 1999 and lastly the Persons with Disabilities Act. Much of this legislation is medical oriented and adopts a welfare attitude. It looks at the physical impairments of people and labels these as disabilities. 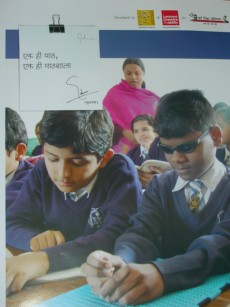 Present legislation does not include as many as 20 provisions of the UNCRPD, especially those pertaining to civil and political rights. (Above: A poster from a campaign for inclusive education by the NGO Arushi, based in Bhopal.)

The UNCRPD, on the other hand, defines disability as an evolving concept, says Pincha. The Convention believes disability results from interaction of impairments with various barriers which hinders full and active participation in society on an equal basis with others. Pincha, who is himself visually impaired, illustrates this concept drawing on his own experiences. "If I arrive in a city and check into a hotel where the instructions on how to dial the operator and other information given to the sighted are also available in Braille, if the elevator has Braille signs, if the menu too is in Braille, then my blindness is only an impairment. It is not a disability," he says.

The medical approach, which was the norm for centuries, sought corrections for the individual. The rights-based approach adopted by UNCRPD seeks a society that is designed and structured to help all categories and sections to access facilities and opportunities. This accessibility is not just confined to building roads or constructing buildings that have ramps for wheel-chairs, but it means ensuring that the disabled can access public transportation systems, pedestrian signs (Braille and audio), public facilities like schools, sports auditoriums, clinics, hospitals, malls and so on. Even, perhaps, adding special fitting rooms in department stores for those on wheel-chairs.

Whilst the PWD Act has in place a set of concessions and policies for the disabled it does not included the notion of non negotiable rights, says Pincha. The disabled cannot claim accessibility features as a matter of right. Their availability is subject to either formulation of schemes by the government or as per the ''economic capacity and development" of the State. A new law is necessary, says Pincha, because India has ratified the UNCRPD, whereupon it is mandatory for the government to adopt the human rights approach which would necessitate bringing about changes in all other laws like the recent right to education, employment and so on. The changes required would be so numerous and of such substantial, fundamental nature that it is better to draft a new law, he adds.

Saptarshi Mandal, of the Lawyers Collective points out how current legislation is not in tune with human rights obligations or with the advances in medicine and technology. For example, with technical advances available today, it should be possible for the visually impaired to access banks through ATMs and so on, but there is no enabling legislation to ensure the adoption of these technologies to serve the disabled. Likewise, there are laws on the books that have been framed during Colonial days, and have not been updated to reflect current knowledge or sensibilities. The Railway Act, for instance, says that people with leprosy cannot board trains even though it is now known that leprosy is not contagious and that a person with leprosy becomes non-infective within 24 hours of starting treatment.

Rajive Raturi, National Director, Disability Rights Initiative of the Human Rights Law Network, says that present legislation does not include as many as 20 provisions of the UNCRPD especially those pertaining to civil and political rights, such as freedom from cruel and inhuman treatment, freedom of expression and access to information, right to marry and have a family and freedom to participate in political and public life.

For example, according to current provisions of Indian law, those with mental illnesses cannot enter into contracts and have no property rights. The UNCRPD has made it clear that even the most severely affected people and the mentally retarded have rights and that the state must provide support networks to enable them to exercise these rights.

Further, the UNCRPD specifically addresses issues pertaining to women with disabilities and the rights of children with disabilities - something that current Indian legislation lacks. Worse still, certain sections of law are abused in ways that hurt the rights of disabled persons. The Center for Advocacy in Mental Health of the Bapu Trust in Pune has highlighted how Section 19 of the Mental Health Act - dealing with 'admissions to institutions under special circumstances' is often abused by families to dump women in institutions.

Both Raturi and Pincha have been active in using the law as a tool of social change and have filed Public Interest Litigation Pleas to address the existing discrimination. Raturi, along with others, challenged the government's postal life insurance scheme whereby disabled persons got lesser coverage and had to pay increased premiums. A writ petition was filed before the Delhi High Court citing UNCRPD and equality principles that the Constitution of India guarantees to all its citizens - including the disabled. The Court directed the Solicitor General (SG) to appear in person and respond to the discrimination.

Appearing on behalf of the government, Gopal Subramanium (the SG) assured the court that the government will hold broad consultations with experts and also take advice from the insurance regulators to draft a fresh policy which will have no discriminatory clauses against the disabled. Subsequently the government has notified that the coverage under the scheme will be uniform but orders have yet to be passed.

Raturi has also taken up the cause of deaf persons who are permitted to get driving licenses in many countries, but not in India.

Pincha has challenged banking norms whereby restrictions were placed on blind persons for opening accounts and for issuing cheques. Admitting his writ petition related to access, use and enjoyment of banking services and facilities by blind people on an equal basis the Guwahati High Court passed an interim order directing the concerned bank authorities to open his account in accordance with the normal procedures, giving him cheque facilities and without insisting on any special undertaking as sought by the bank. Subsequently the banking sector has revised its guidelines and become more progressive.

Pincha has also successfully taken up with the Chief Commissioner of Disability the issue of discriminatory treatment of disabled, air passengers who are forcibly seated at the rear end of the plane without consideration of their own preferences. The Director General of Civil Aviation, in consultation with various airlines, has consequently sought more progressive guidelines.

For Pincha these PILs are part of an ongoing crusade against the culture of discrimination and politics of exclusion that disabled persons routinely experience. Activists for the disabled say that rights based efforts to create an enabling environment for the disabled are ultimately all about demonstrating the main premise of the UNCRPD - namely that disability is a part of human diversity, and that the rights of disabled must therefore be at par with those of others.