Ashok Gehlot, Chief Minister of Rajasthan, has endorsed a population action plan which seeks to bring back the days of the emergency, when the entire administration was busy with sterilization operations. At a public meeting in Gorakhpur in UP, some time ago, Home Minister L K Advani declared that a law would soon be enacted to enforce a two-child norm in the country. Later Sushma Swaraj, the Health Minister, clarified that this law was not intended as a coercive measure, but is the need of the hour. Clearly the fear of a population explosion is very much on the minds of leaders.

And politicians are not alone in this fear. The Supreme Court, in its judgment delivered on 30th July this year, upheld the Government of Haryanas two-child restriction for election to local bodies. There are several other states - e.g. Madhya Pradesh and Rajasthan - with similar restrictions.

Indias population growth has been a overwhelming concern and basis for many doomsday predictions. It has been held responsible for almost all the socio-economic ills and the lack of development in this country. The national concern for population growth has been evident since independence and later this issue achieved notoriety for having brought down a government. The two-child norm, which encourages couples to adopt terminal methods and provides disincentives to those who do not, has always been a very attractive solution to the problem. But before jumping to such obvious conclusions, it is necessary to understand the nature of the problem and the proposed solutions. 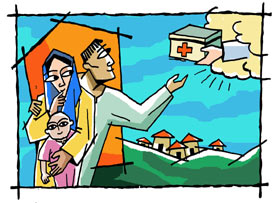 It is true that Indias population at over one billion is second only to China's. But this does not automatically lead to the logic of population control. It is also true that there are some states and districts where population growth is significant but these states and districts also have higher poverty, lower literacy and poorer public health. It is not surprising that these districts also suffer from low investment, poor infrastructure and bad governance.

Indias population continues to grow because of some well identified reasons. Poor people's reluctance to adopt family planning measures may appear the most obvious one, but this is not the primary reason. All Indians concerned about popoluation should be familiar with the term 'population momentum'. In simple words Indias population appears to keep growing rapidly because it is like an express train which has just applied its brakes. The train does not immediately stop when the brakes are applied.

The number of children each woman has in her reproductive life has reduced considerably over the years but the birth and growth rates continue to be high because of the large number of young reproducing couples. The Indian population train is very heavy and because it was moving very fast it will take time before it actually stops. The important thing to note is that the brakes have been applied! According to experts only a small fraction of the population growth is due to people wanting more children.

This brings us to the other important reason for unwanted fertility, which is unmet needs. Unmet needs refer to couples having more children than they want because they dont get contraceptive services. In the so called rogue states of UP, Bihar, Rajasthan or Madhya Pradesh this figure is often as high as one-fourth or one-fifth of the overall population of eligible couples. For segments like the poor, those living in inaccessible or remote rural areas or for certain communities this figure may be much higher. Couples in India already want fewer children than they end up having and thus enforcing a two-child norm may be an inadequate strategy, because the actual need may be a functioning primary health centre or sub-centre where contraceptives are accessible.

Enforcing a two child norm without enhancing the status of women leads to increased suffering through sex pre-selection, repeated abortions and violence against women.  •  Are people a problem?
•  A new plan for safe motherhood

It is common practice to blame the people for their irrational beliefs and traditional practices which lead to their reluctance in adopting contraception. This approach is convenient because it lays the blame squarely on poor people. And it becomes easy to coax, cajole and bully them with incentives and disincentives. If we look at the supply or service-providers side, a grim picture emerges. The standard of delivery of services is uniformly poor in the problem states, and there is recent documentation of how ordinary bicycle pumps are being used in blowing air into the abdomen of women undergoing operation. Almost all standard surgical norms are violated and the result of such callousness is increased suffering for women, failures and death. Failure and death rates for such procedures are on a conservative estimate 5 times higher than internationally accepted standards. Such a situation does not really lend to building public confidence in state family planning services.

The Government of Haryana can today be proud that the Supreme Court has vindicated its decision for enforcing a two child restriction in election to public bodies. But surely it is a lack of introspection that makes it forget that Haryana has been among the frontrunners in the country in finishing off its girl children. The results of the last Census (2001) clearly shows how Haryana and its neighbours, Punjab and Himachal Pradesh performed brilliantly on the two-child side, but at the same time silently decimated their girl children through sex pre-selection. The opinion of experts is unambiguous  enforcing a two child norm without enhancing the status of women leads to increased suffering for women through sex pre-selection, repeated abortions and violence against women.

The investment that a country makes in the health sector reflects how important it considers its people. And the public investment in health in India is abysmal, both in terms of actual proportion of the budget as well as the proportion of overall expenses on health care. In poverty stricken India an astounding 83% of all expenses for healthcare come from private pockets (the other 17% is from public funds) whereas in the US the same figure is nearly half at 46% . It is clear that government spending on the health of its people is woefully inadequate.

Added to this low investment in health is the fact that the staff is largely unmotivated and unaccountable. The result is that essential services in health and family welfare are hardly available for the poor. In UP, the main culprit of the population problem, even routine maternal and child health services are missing. 78 percent of births are unsupervised and 79% of children do not receive complete immunisation according to the latest National Family Health Survey conducted in 1998 99. What these percentages mean in terms of human suffering is that in this state alone over 35 thousand women die each year from pregnancy related causes and about three and a half lakh children die before reaching their first birthday. Most of these deaths are preventable but no questions are ever asked of the health system.

Before promoting the idea of legislation for ensuring population control there are some issues that need careful consideration. The most important among those are articles 14, 15, 16 of the Indian Constitution which deal with equality. And then there are the International Bill of Human Rights and the Convention for Elimination of all forms of Discrimination (CEDAW), which are UN treaties meant to safeguard the interests of the most vulnerable individuals in any situation. According to our own National Population Policy (2000) the focus should be on enabling couples to plan their families by providing them adequate information and quality services so that the overall population of the country stabilises and there is all round social, economic and human development.

Population control measures, wherever they have been applied, affected women more than men, the poor more than the rich. The Emergency excesses have become political mythology because they were committed on men. Women in these very states face a far more depressing situation today, but it does not bother anyone. Safety norms are hardly ever followed in family planning camps, failure rates not monitored, women are treated like cattle and finally there is no accountability even for deaths. An official suspension of the tenuous human rights that poor women possess may well lead to their slaughter in the hands of a suddenly over-anxious but unconcerned system.

Political will is essential to improve the lot of the poor illiterate people of the problem states and the districts of concern. But this political will does not need to translate into legislation which calls for controlling people and suspending the few rights that they may have. Our ministers are better advised to implement already articulated policies, programs and provisions, and above all ensure administrative accountability. In addition there needs to be far more resources, material, fiscal and human, committed to these states and districts. Unfortunately it is always more tempting to control the people than activate the system for the people, which is the basis of good governance. The solution is simple but certainly not simplistic.

Abhijit Das works on public health and human rights issues, and is associated with various organizations, networks, grassroots groups and related campaigns. He has been a Fellow in Population Innovations of the MacArthur Foundation and a Fellow of the Population Leadership Program of the University of Washington, Seattle.