"If anyone speaks about Hinduism, he is branded as a fundamentalist!"

Sir Mark Tully spoke recently in Bangalore on How certain should we be? The problem of religious pluralism. Revathi Siva Kumar caught up with him for this exclusive interview.
16 October 2010 -

The soft, October skies shudder with the hint of a drizzle, even as Sir Mark Tully showers his gentle viewpoints on the religious situation of India today.

His observations on the polarities of religion in India are not so unique, he admits, yet they are laced with interesting insights. While his statements appear to be clichéd at first, they tend to emerge as lightly analytical in retrospect. This tall, affable and extremely charming journalist can throw a few word bombs in a subtle way. 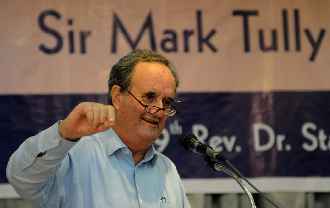 He acknowledges the ironies of the contemporary situation. For instance, he observes in his speech on October 8th, 2010, at a talk organized by the Bangalore Initiative for Religious Dialogue (BIRD) on How certain should we be; the problem of religious pluralism, that religion is culturally specific in many ways, but it is also highly individualistic, at the same time creating a culture of pluralism. There is also blind secularism in this country, so that if anyone speaks about Hinduism, he is branded as a fundamentalist!

The last statement is obviously the outcome of a raw nerve that was touched recently when he seemingly spoke in support of Hinduism. He was immediately called an RSS rightwing by a journalist!

Sir Mark also suggests a solution to the uncertainties of the situation -- acknowledgement. It is important that we should admit the uncertainties of today, he avers. The solution and key to resolving the polarities of religious pluralism is just mystery. It is necessary to keep a certain open-mindedness about religion. Let us admit that we do not understand it fully, and therefore be willing to accommodate.

India is one of the few countries in the world which has been influenced, rather than converted by all religions.

Born in 1936 in Kolkata, India, Sir Mark remained the former Chief of Bureau of the BBC for 20 years in New Delhi till July, 1994. Ever since, he has been a freelance journalist based in Delhi, and has written a number of books on India. He is also one of Britain's most popular broadcasters, with his Radio Four show, 'Something Understood'.

In an exclusive interview, Sir Mark touches quite articulately on the complex, general issue of religion and its problems and solutions. Yet he becomes a bit unclear, even evasive, when it comes to controversial specifics, such as the Ayodhya judgement.

So what is your unique take on religious pluralism?

Its not so unique! Religion has never been more important than today, and I think we should have negotiations, in order to end disputes. Willingness to learn from each other, along with acceptance of religious differences, is important. Disputes about religion lead to wars and terrorism.

Do you think the Ayodhya judgement reconciles the contradicting viewpoints of diverse religions, or do you think it was a concession to majority and minority viewpoints of every dispensation, as is being pointed out in some sections of the media?

Hmmm.Ayodhya should never have happened! It was the most shameful incident in particular. I was there, I covered it, I told L K Advani at the time that it should not have happened.

Yes, but what of the recent High Court judgement? Do you think it is the best possible judgement under the circumstances? Or is it pandering to rightwing sentiments?

A strong section of the BJP realises that their brand of rightwing viewpoint is not going to allow them to develop as a party, but will confine them into a corner.

Isnt there a change that is visible in the general opinion over Ayodhya over the years?

I dont find any change in the Congress party, while the BJP has always used Hinduism as a political weapon. If you cast your mind back, Ayodhya spelt the end of secularism in India, although today, there is more accommodation.

What exactly should be the religion of the modern world?

What is has always been---a search for meaning, for communication with the transcendental. 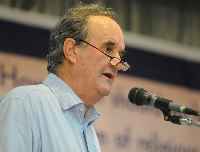 What is your personal religion?

My personal religion is Anglo-Catholic Anglican. We believe in the right to worship in the same manner as the Roman Catholics, believing in the infallibility of the Pope.

Religion will always be introduced in two ways. Firstly, it would be a little specific. Secondly, it will be fluid and changing. There is an essential humility that is taught by religion. Man as a race has become too arrogant.

Being a Christian, how do you expect to reconcile a proselytizing religion with acceptance of pluralities?

Youve hit the nail on the head! Ours is certainly a proselytizing religion, so we need to propagate our religion in ways that encompass dialogue, rather than just preaching, without showing disrespect to anyone elses religion.

Some proponents of other religions do not take that kindly either. They claim that it does not address the fundamental problem of propagating religion---whether arrogantly or humbly---to tell someone else that your religion is not as good as mine.

You need to be open-minded to change that. For instance, my view of Christianity has changed considerably because of what I have learnt from India, while Indian Christianity is wrestling with a problem I have learnt over the years.

India has taught me that there are many ways of approaching God. The great thing is that India is one of the few countries in the world which has been influenced, rather than converted by all religions. Dialogue has to be the basis of reconciling differences, as well as negotiation.

In a fast-changing world, a Muslim may see his religion being threatened by a western, materialistic culture, which actually has no place for religion or spiritual matters. In the West, we criticize burkhas, but we never ever wondered what the Muslim thought of a bikini. It is important to sit and talk in order to reconcile differences.

Moving on to a different topic, you wrote India in Slow Motion, where you talked of bad governance due to the inheritance of colonial legacies and structures. Do you find that there has been a lot of change in eight years?

No, it has probably become worse. You can see the Commonwealth Games as an example of bad governance. Or the state of governance in Bangalore.

How many times have you visited Bangalore? What do you think of Bangalore today?

Ive lost count of the number of times Ive visited Bangalore. And not much of what I remember is left! Bangalore is typical of a city that has grown too fast, without enough planning and infrastructure.

If you have so many issues with India, you are obviously comparing it with a subconscious template of good governance elsewhere, perhaps in UK. So why exactly do you choose to stay in this country?

Bhagwan! I look at my life as a series of accidents. The role of the accidents is to bring me here and make me stay here. Im not like those foreigners who come to India and then try to be more Indian than the locals. I certainly dont live here because I consider it to be the most wonderful country in the world!! No. I was born here and have been here, and have been responding to circumstances here. It is a deliberate choice. Living here is a recognition of the role that religion has played in my life. If you have lived in a country for 50 years, you dont get fed up. In some ways, I belong here, in other ways, I dont.