Livelihoods caught in the nets

As the state clamps its annual ban on trawl boats along the Kerala coast, an old battle rages again, pitting traditional fishermen against trawl-boat owners who view the occupation quite differently. Each side feels that positive intervention by the state is required. M Suchitra and P N Venugopal report.
07 July 2006 -

The fishing harbour at Thoppumpadi, on the banks of Kochi Backwaters in Kerala's Ernakulam district, usually a hub of bidding and trading activities, is deserted and silent. No bidders or traders, and the regular groups of women vendors waiting with their baskets are not around either. Hundreds of trawling boats that reach the shore laden with catch worth lakhs of rupees, have all gone off the sea for a month and a half. The state has issued its annual 45-day monsoon trawling ban, and this harbour, as well as the eight other fishing harbours in the state, will return to life only after the ban is lifted. This is the nineteenth consecutive year the state government is imposing a ban on trawling, in its effort to regenerate marine resources along a 22-km strip of Kerala coastal waters.

But, as in the past, this year too the ban has triggered controversies, with trawl-boat workers and traditional fishermen pitted against each other. The ban often leads to fights on the shore and even skirmishes at sea. Boats are burned, as emotions flare up. 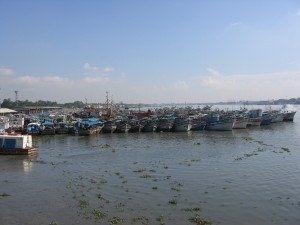 Caught in the ban. Rows of trawlers at Thoppumpadi Fishing Harbour, Ernakulam.

Trawl-boat owners and workers feel it's totally unfair to ban a section of the fishing community during the monsoon, when the catch is maximum. There are around 5000 trawling boats in the state and each of them employs an average of four workers. "We are unemployed for almost the entire duration of the ban," says M Antony, who has been working on a trawler for the last 20 years. "I have two kids at home. I borrow money from lenders to support my family." But the traditional fishermen are adamant that the trawlers should be banned during the monsoon. "Monsoon is the only season when we get good catch. The remaining nine months it's very difficult to pull on." They also point out this is the time when fish spawn and breed. "The trawlers sweep the sea bed and cause massive destruction of fish juveniles and eggs", says C J Joy, a traditional fisherman from Vyppeen in Kochi.

The ban on monsoon trawling came to stay in the state in 1988, following years of agitation by the traditional fishermen. The state government was forced to appoint an expert committee to study the impact of monsoon trawling on marine wealth, and the committee - headed by Professor N Balakrishnan Nair - recommended a 90-day ban during the monsoon for three consecutive years, followed by a re-evaluation of the situation.

Other studies too have clearly pointed out the devastating effects of trawl fishing. It has direct and indirect impacts on the marine ecosystem and microorganisms. "Trawlers operating along the Kerala coast kill and destroy an average 2.5 lakh tones of marine organisms annually, comprising of 232 species," points out Dr B Madhusoodana Kurup, head of the Department of Industrial Fisheries, Cochin University of Science and Technology (CUSAT), and a member of the Balakrishnan Nair Committee. Separate studies which he conducted from 2001 to 2004 for the state government and also for the Central Government on the "Impact of Trawling On the Sea Bottom and its Living Communities" reveal that trawling destroys 2500 tonnes of juvenile squid and cuttle fishes, 5000 tonnes of shrimp juveniles, 80,000 tonnes of juveniles of low quality fishes and 700 tonnes of eggs.

Trawling also causes serious perturbation at sea bottom by a four fold increase in turbidity, reducing dissolved oxygen and organic matter to half, regenerating nutrients trapped in the sediment, altering the sediment structure, adds Madhusoodana Kurup. And even a partial ban can have significant positive effects. The evaluation by the Balakrishnan Nair Committee confirmed that even though the ban was only partial, it was highly beneficial for the regeneration of marine wealth. Fish production showed an increase of 65% when compared to the pre-ban period, according to the Central Marine Fisheries Research Institute (CMFRI). At least 40 fish species of commercial value have their breeding season during this period as the monsoon reduced underwater temperatures and the penetration of light too was minimal, thus providing conducive conditions for spawning. "Preservation of habitat is crucial", says Dr Madhusoodana Kurup.

Trawling was first introduced in India in 1954 under the Indo Norwegian Project (INP) aimed for developing fishing technology. It was at the Neendakara Fishing Harbour in Kerala that the first trawler was experimented with. As it was found to be 'successful', going by the size of the 'catch', the state government went all out to promote trawling. From 1962 to 1982, nearly all the investments made by the government in fishing were in mechanised sector. Traditional fishing received only minimal attention.

The government's intention was to modernize the traditional fishermen and to make them the owners of modern fishing equipment. About 1200 trawl boats were supplied to them at heavy subsidies. But the fishermen could not manage their operational costs sufficiently to make the repayments, and the fishing boats ended up in the hands of a new tribe of boat owners who viewed fishing only from its business end, and had no genuine connections with the activity of fishing itself. The large-scale presence of shrimps and prawns in the Kerala coast and their export potential also brought more entrepreneurs to the fisheries sector. Banks too stepped in, and soon enough the Kerala coast was swarming with trawl boats.

The explosion in trawling led to over exploitation of marine wealth and had alarming consequences on the traditional sector. Marine fish production, which had reached 4.5 lakh tonnes in 1973, steadily declined to 2.83 lakh tones by 1987, according to CMFRI. Prawn production, which was 86,000 tonnes in 1973, declined to 25,000 tonnes over the same period. Traditional fishermen were especially hard-hit. The average output per fisherman per year, which was 3.8 tonnes in 1965, drastically fell to 1.6 tonnes by the early eighties.

Trawling has come under broad attack from traditional fishermen, who see their economic lifelines threatened by technology. But equally, trawling boat owners strongly argue that the 500-odd crafts with inboard engibes should also be banned.

To counter the challenges posed by the trawling boats, the traditional fishermen turned to mechanization. They started off with low power outboard engines and gradually to engines with 25 hp. Some even began to use two or three engines. These were not really affordable - the engines used a fuel mix of petrol and kerosene, and operational costs were quite high. But at least, they hoped, it would allow them to scoop up fish they would otherwise never be able to find by their traditional ways alone. Towards the end of the nineties, country crafts of 80 ft and more in length began to be fitted with inboard Leyland truck engines. These crafts can accommodate 50 to 55 fish workers, use ring seine nets weighing up to 4000 kg. Their high fuel capacity enables the craft to go farther out into the sea, cutting the operational costs greatly.

Trawling has come under broad attack from traditional fishermen, who see their economic lifelines threatened by technology. But equally, trawling boat owners strongly argue that the 500-odd crafts with inboard engibes should also be banned. "How can you call these large crafts with in-board engines and banned ring seine nets traditional?" asks Joseph Xavier Arappurakkal, president of the Boat Owners' Association. Scientists too point out that even though these vessels catch only surface fish, the use of a ring seine net kills many fish juveniles.

But the traditionl fishermen have a ready defence. "It's the unhealthy competition from the trawlers and their purse seine nets that forces us to turn to mechanization," says Charles George, president of the Kerala Matsya Thozhilai Aikya Vedi (TUCI, the Kerala Fishworkers' United Front). "Now there's no going back. The privileges of mechanization are ours too. The allegation that we are doing as much harm as trawler boats do is mere canard." However, he agrees that the nets used have to be modified so that the juveniles are spared, and also that there should be a ceiling for the number of inboard engine vessels in every region.

Indiscriminate mechanization is becoming a costly affair, however, and is leading to a debt-trap. The inboard engine crafts cost anything between Rs.35 to 50 lakhs. The fishermen form small groups of 15-20, and raise a lakh or two. Matsya Fed, a quasi-government body, lends eight lakhs. "We borrow the rest from private money lenders at high rates", says Dishi K K, leader of Sriman Vallom group.

Trawl-boat operators and the newly mechanised traditional fishermen do make common cause on one question. They are in complete agreement that foreign deep-sea trawlers should be banned from India's Exclusive Economic Zone (EEZ) stretching up to 200 nautical miles from the coast. They contend that the Central government's decision to give licences to 725 big vessels is highly objectionable. They allege that the foreign trawlers encroach into the nation's economic territory, poach fish, over-exploit resources, ruin their gear, etc. "Why lease out our seas to them?" asks T N Lavan, a member of the Edavanakkadu Gram Panchayat Committee, who represents the coastal ward. "If deep-sea fishing is beyond our capacity, why can't the government take some steps to build our capacity?" he adds.

As the monsoon continues, so too do the problems, which transcend much more than the seasonal ban. Over-exploitation of marine resources, use of nets detrimental to conservation, middlemen who fleece the fish workers, and debt traps, are all major issues to be addressed. "Measures like the ban of 45 days are superficial", says Lal Koiparambil of the Kerala Swatantra Matsya Thozhilali Federation. As he points out, scientific planning is required for assessing the fish resources, the optimum quantity that could be harvested without harming the resource base, and to determine the right number and mix of fishing vessels. (Quest Features & footage)

The authors are with Quest Features & Footage in Kochi, Kerala.