Maimed by the state, quietly

Amidst a culture of silence and media inattention, torture is easy to find in the security hot zones of India. A new film bares the ugly truth. Freny Manecksha reports.
13 August 2012 -

"They pulled my nails out completely and rubbed chilli powder into the wounds."

"Soldiers got on top of me. One of them chopped my feet with a knife. I could see blood flowing and my feet twitching. ... They cut the flesh of my waist. They made me eat all this ..."

"They set the bottom of my legs alight and the fabric stuck to my skin ..."

Truly horrific. Macabre descriptions, taken not from some archives of a medieval torture chamber, but from Channel Four's film - Kashmir: the Torture Trail - that was aired last month. Directed by BAFTA award winner Jezza Neumann and produced by Brian Woods, the film follows Kashmir's noted human rights lawyer Parvez Imroz, who is documenting torture testimonials of victims at the hands of Indian security forces and police, for the first comprehensive report on use of torture as a repressive weapon in Kashmir.

Recording statements and providing graphic visual images of victims ranging from Firoze, detained under PSA with a head wound, to a girl who was raped by troops, to the shepherd Kalendu Khatana, whose feet were cut off by the Border Security Forces, the film buttresses its point of institutionalised torture, by verification from the government's own human rights organisation or statements by Human Rights Watch, Amnesty International or the United Nations. 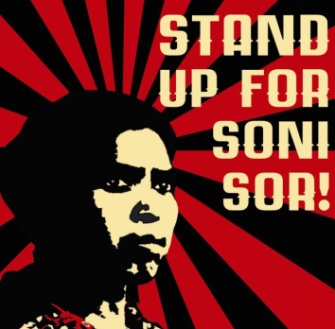 India has signed but not yet ratified the UN Convention against Torture. The UN Special Rapporteur on Torture has been denied permission to visit India.

The State Human Rights Commission, which has probed Khatana's claims, found them not only to be true but made the damning observation that it was one of clusters where Indian security forces had hacked away at limbs of suspects so badly that amputation was inevitable. Twenty years after his feet were cut off, Khatana's wounds fester, as does his claim for compensation.

The film's promotional video calls it India's best kept secret, but torture, like the presence of the unmarked graves, has long been an accepted fact in Kashmir - one that has been difficult to document, however.

Parvez Imroz, who has been actively involved with the Association of Parents of Disappeared Persons, and who worked along with the International People's Tribunal on Human Rights and Justice in Indian-administered Kashmir on Buried Evidence - the extensive report on unidentified and mass graves, has been speaking out against torture. In the film he declares, "Some people must stand up and say 'No this is not acceptable. We will campaign against it."

It was the publication of the WikiLeaks cable last year that brought to light concerns by the international community over the extensive use of torture in India. The dispatches reveal that US diplomats in Delhi were briefed in 2005 by the International Committee of the Red Cross (ICRC), which said that out of the 1296 detainees it visited in Kashmir, 681 said they were tortured.

The film also looks at the way the draconian Public Safety Act or preventive detention is used to detain hundreds without trial, and the way in which young street protesters and stone pelters continue to be rounded up and tortured.

Mohamad Junaid, currently studying anthropology in New York and specialising on issues of militarisation and violence , grew up in Kashmir in the nineties. He witnessed and has written about the humiliation of crackdowns, arrests and protest marches. He believes the state uses torture not so much to extract information, but to send messages to the "larger oppressed nation through broken and defiled bodies, to break their national will and determination. This psycho-somatic warfare against Kashmiris is an unconscionable blind spot in the discourses about human rights and justice in the international arena."

Channel Four's film comes close on the heel of a campaign by Indian rights activists protesting the use of torture against political prisoners and for reforms on issues related to torture.

Two weeks ago Amnesty International launched its petition urging the Indian government to stop the use of torture, noting that disadvantaged, marginalised groups including women, dalits, adivasis and suspected members of armed opposition groups are those most commonly abused. The petition begins with an appeal by Nazir Ahmad Sheikh, a Kashmiri from Handwara who was forced by members of 14th Dogra regiment to walk barefoot in the snow and whose feet were also later burnt with a stove.

India has signed but not yet ratified the UN Convention against Torture. At the UN Human Rights meet in Geneva this year India claimed it had a prevention of torture bill pending in Parliament. Activists say it does not comply with standards laid down by the UN Convention. The UN Special Rapporteur on Torture has been denied permission to visit India.

Noted documentary film maker Sanjay Kak who made a film on Kashmir, Jashn-e Azadi (How We Celebrate Freedom) believes that the institutionalisation of torture is because of growing militarisation of ever greater swathes of the country and the general public's ability to stonily accept its terrible consequences. "At its root is a crisis in the sphere of politics where the art of persuading those who disagree has been replaced by the brutal science of torture."

The media's compliance in hiding the story has meant "we have managed to block out the use of torture and custodial killings in Nagaland and Manipur, glossed over its use in Punjab and managed to do that in Kashmir for over two decades. But the rot is beginning to come out in the open."

But in India itself it has been met by and large with a deafening silence. Earlier this year too, there was very little public outcry when adivasi teacher Soni Sori, held in Chhatisgarh on grounds of being a Maoist sympathiser, charged the police of torturing her by pushing stones up her vagina. The case is in the Supreme Court even as a gallantry award was conferred on the police officer concerned. It is only "an overworked set of activists who are trying to keep the hard questions on use of torture alive," adds Kak.

"The business of torture has become like a contagious disease with the state," says Kak. "You may initially use it against those you call terrorists, and do it with the implicit and unthinking approval of ordinary people. But then you start using it against those you call separatists, then on Maoists, and then on their sympathisers and next on innocents like Soni Sori who happened to be caught in the crossfire. People will wake up only when one works towards uncovering the endemic and casual use of torture in our police stations and lock ups - against dalits for example who neither want to secede or overthrow the state."

So can documentaries and films make some kind of impact? Kak, whose Jashn-e Azadi faced hostility and threats says that since the Indian state has to present itself to the world as a democracy - the world's largest at that - shaming it for its widespread use of torture will work. "The state wears a thick skin, but even the thickest folds of skin have a chink where a needle can make its way through and make the beast jump."