The government's recent traditional knowledge digital library will send data to patent offices abroad, so that indigenous knowledge that India abundantly has is not patented overseas. Following India's example, other nations too are showing interest in similarly protecting their interests. Ramesh Menon reports.

Very few countries in the world can boast of the variety and vastness of traditional knowledge that India has. As the global economy has taken more firm root, however, this knowledge has increasingly been available to non-Indians as well. And in research laboratories and patent offices around the world, this knowledge has been exploited and claimed exclusively by foreigners, both individuals and corporations. Various voices in India have long protested this, and urged the government to intervene to check this practice. Finally, India has woken up to this task.

The country will now have a unique digital library, known as the Traditional Knowledge Digital Library (TKDL), of its rich and varied traditional knowledge. The brainchild of Dr. V K Gupta, Head, IT Division, Council of Scientific and Industrial Research (CSIR), the library is designed to record traditional remedies for posterity using ancient science and modern technology. It is the first of its kind in the world and has got scientists excited with the potential it promises. Dr Gupta feels the library will go a long way towards helping India protect its traditional knowledge, and we will not have to fight very expensive court cases trying to win patents back. With six years of tireless work behind them, Dr Gupta's team can look forward to the TKDL protecting vital national interests.

TKDL is a collaborative project between CSIR, the Ministry of Science and Technology, and Department of Ayurveda, Yoga and Naturopathy, Unani, Siddha and Homoeopathy, Ministry of Health and Family Welfare, and is being implemented at CSIR in New Delhi. It is expected to cost around 2.5 million dollars. It entails research in Ayurveda, Siddha, Unani, Yoga, Naturopathy and folklore medicine. Over a hundred experts have been poring over material during the last five years to help complete this unique project.

A good example of the library's potential benefit can be seen from the case of turmeric. While it is common knowledge in India that turmeric contains curative properties, this did not stop a patent being granted for its use in medicine abroad. With the TKDL in place, this sort of violation - deliberate or ignorant will be more difficult. Patent offices around the world would be alerted to the existence of this database, and would need to cross-examine new claims against its knowledge. "It will be mandatory for patent examiners to refer to this database before granting a patent now. India can now effectively stop the patenting of its traditional knowledge," says Dr M.V. Vishwanathan, a senior scientist.

However, its wealth of knowledge has not been published online. There is a good reason, argue scientists. They fear that companies in the West have been raiding the traditional knowledge of numerous poor countries, and online publication of the knowledge would aid such piracy.

A firmer footing for indigenous knowledge

Western scientists have always looked at Indian traditional wisdom with a great deal of scepticism arguing that it has not been tested in a laboratory. With the digital library having details of herbs used for curing various ailments, scientists can now launch their pharmacological tests. But the demand for laboratory testing is merely a charade, says Suman Sahai of Delhi-based Gene Campaign, and there is no reason to subject traditional knowledge to such things before according it due place. "The magic properties of Arogyapacha did not come from scientists sitting in a laboratory, but from a community," she says, referring to the medicinal plant known for thousands of years to the Kani tribals of Kerala.

Besides protecting traditional knowledge from piracy, the TKDL will also have tremendous positive value

Sahai asks why western scientists are so doggedly questioning Ayurveda that has been validated by its success with humans for centuries. Ayurveda is more ancient than most civilizations. The World Health Organization acknowledges that 70 per cent of the people living in India use traditional medicine for primary health care. Today, scientists at the Tropical Botanical Garden Research Institute in Thiruvanthapuram, Kerala, have used this traditional knowledge of the Kanis to produce a stress-busting drug called Jeevani from the plant's leaves. Half of the royalties and license fees from the sale of 'Jeevani' are paid to the Kani in recognition of their intellectual property rights. It is one of the few cases in India where traditional knowledge has been rightly respected and paid for.

Sahai goes further, asking why indigenous knowledge is not recognised as a kind of technology. If we can accept that Japanese or Korean chrome steel is a kind of knowledge and technology that others should be prepared to pay for, why can't this standard to applied to older knowledge, she asks. The West, she says, has to learn that India's knowledge, whatever its age, cannot be stolen anymore than yesterday's invention in the developed world. "If they are going to use our knowledge, they must enter into a benefit-sharing arrangement with us. Will the Americans dare to pirate the knowledge of the Japanese? But they will gladly steal Indian traditional knowledge, knowing fully well that India will find it very difficult to fight them in international courts." Indeed, the costs of contesting international claims on knowledge are quite high; a single court case may be as expensive as setting up the digital library of traditional knowledge! It is a luxury India can ill afford.

In 2000, CSIR found that almost 80 per cent of the 4,896 references to individual plant based medicinal patents in the United States Patents Office that year related to just seven medicinal plants of Indian origin. Three years later, there were almost 15,000 patents on such medicines spread over the United States, UK, and other registers of patent offices. In 2005 this number had grown to 35,000, which clearly demonstrates the interest of developed world in the knowledge of the developing countries. Conveniently, none of the patent examiners are from developing countries, allowing a virtual free pass to stealing indigenous knowledge from the Old World.

In 1995, the US Patent Office granted a patent on the wound-healing properties of turmeric. Scientists at CSIR asked for a re-examination of this patent - #5401504 - filed by two US-based Indians. In a landmark decision, United States Patent and Trademark Office revoked this patent as it was being used in India for centuries. This was the first time that a patent based on the traditional knowledge of a developing country was challenged successfully and US PTO revoked the patent. The case of the revocation of the patent granted to W.R. Grace Company and US Department of Agriculture on Neem (EPO patent No. 436257) by European Patent Office, again on the same grounds of its use having been known in India, is another example. While these examples suggest that some errors can be reversed, this comes at a high cost and after enormous effort; the US case, for example, lasted two years and cost $6 million.

Creating the TKDL's database has not been easy. For many years, nearly a hundred doctors and scientists studied ancient medical texts, taking notes, tabulating the data and keying in information. The doctors were practitioners of Ayurveda, Unani and Siddha, ancient Indian medical systems that date back thousands of years. Leafing through the texts took a lot of effort and co-ordination. The Ayurvedic texts were in Sanskrit and Hindi, Siddha ones were in Tamil, and Unani was in Arabic and Persian. Many of the texts that they waded through were thousands of years old. And the information to be collated is enormous; for instance, there are already nearly 150,000-recorded Ayurvedic, Unani and Siddha medicines, and over 1500 asanas in yoga. Yoga masters say that there are thousands of other asanas that have been lost without proper documentation.

A lot of traditional knowledge is also oral, and acquiring it in recorded form can be challenging. Says Sahai: "The huge corpus of knowledge lying outside of books must be put on a very high priority. For instance, there is a lot of knowledge available with the tribals in Jharkhand and Madhya Pradesh. But there is erosion of indigenous knowledge among the Tharu tribals in Uttar Pradesh in the Terai region because of urbanisation. In another two generations this knowledge will disappear. This documentation must be taken up on a war footing and the digital library has a massive job on its hands." 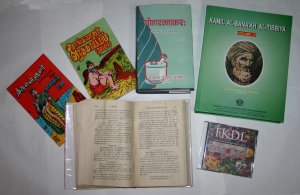 Picture: The books and CDs of the TKDL incorporate knowledge from a number of different traditions, and from very different languages.

It is not just India that stands to benefit if a digital library is organised to document traditional knowledge and shield it from patent marauders. Like India, the rest of South Asia too is rich in traditional knowledge that is crucial to health, medicines, agriculture, biotechnology and biodiversity. Eighty per cent of its 1.4 billion people have no easy access to modern health services, and are therefore very dependent on traditional medicine.

At the moment, India is the only country in the world with such a traditional knowledge digital library, but in many ways, the Indian effort is also a clear message to other countries to do a similar thing to protect their knowledge. After the Indian venture into setting up this library, other countries such as Iran, South Korea, Thailand, Magnolia, Cambodia, South Africa, Nigeria, Pakistan, Nepal, Sri Lanka and Bangladesh have shown interest in setting up similar ones for their own traditional knowledge. Indian scientists say that China and Japan too have a wealth of traditional information and will soon also create a digital library like India's. Representatives from South Africa, the Commonwealth West African Education Delegation, the African Regional Industrial Property Organization and International Property Office in Singapore have already discussed with India the possibility of creating similar databases.

Ramesh Menon is a journalist and documentary filmmaker. He received the inaugural Ramnath Goenka Award for Excellence in Journalism for an article he wrote for India Together