No public, no hearing

The Nalwa Sponge Iron Limited's plans to further expand its operations at a plant in Chhatisgarh run into opposition from locals and NGOs, who point to the company's history as well as irregularities in the environment clearance process. Kanchi Kohli reports on recent developments.
16 March 2006 -

The Nalwa Sponge Iron Limited (NSIL) has been in operation in Taraimal village, Raigarh disrtict, Chhatisgarh since 2001, when its first Direct Reduced Iron (DRI) kiln was started. It is located about 12-13 kilometers north of Raigarh town; the Kelo river, the lifeline of Raigarh, flows at a distance of about 500-700 metres from the plant. Since its inception the plant has grown so that today NSIL is operating with 6 DRI kilns, a captive power plant, coal washery and a steel melting shop. In January-February 2006, notices were issued in local newspapers announcing a public hearing for the further diversification of the units of NSIL at Gharghoda. The hearing, which is mandatory under the Environment Impact Assessment Notification 1994, was scheduled for 3rd March 2006. But now the company's expansion plans have run into opposition from local communities.

As with many other industrial plants around the country (see 'Controversies abound' in box), NSIL's operations have been contentious, and ridden with environmental and social problems. Locals' complaints include charges of pollution, non-compliance with conditions for consent of establishment, land grabbing, encroachment on forest and revenue land, impacts on ground water, health hazards, and road accidents. In Taraimal village, with a population of 750 or so people from farming families, residents complain that the plant has affected their livelihoods and health. The flying dust from the piles of char dumped all around the plant, they say, has settled on trees, plants and crops, affecting their agriculture, and has also caused serious health problems in the community.

The hearing itself was scheduled 20 kilometres away from Taraimal at Gharghoda, making it quite difficult for people from the affected areas to attend.

The Chattisgarh Environment Conservation Board (CECB) gave its consent for establishment to NSIL on 22nd October 2001 with 23 conditions. These include:

Many of these conditions have not complied with to date. Most of the conditions laid out by the CECB have not been complied till date. Within a year of operations, the extensive air pollution by the plant started affecting the villages surrounding the area, specifically Taraimal where the plant is located. Several notices have been issued by the CECB to NSIL, but the non-compliance continues. Some of these notices have clearly indicated that no further expansion of NSIL should take place (2003) and also that a comprehensive EIA should be carried out for the plant (2005). According to Ramesh Agrawal from a local NGO Jan Chetana, "the plant was also closed down for a short while, but started operation soon." 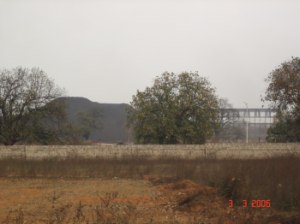 A mountain of ash dump around the Nalwa plant (Picture by Kanchi Kohli).

The public hearing for the proposed expansion brought the many concerns to the fore once again. The hearing itself was scheduled 20 kilometres away from Taraimal at Gharghoda, making it quite difficult for people from the affected areas to attend. The dubious practice of selecting distant sites for public hearings has now become very common throughout the country; it is a testament to the impact of the plant on their lives that some villagers still made the long journey, arriving at the hearing site in a trickle as the day wore on. But the main task of raising concerns and demanding the cancellation of the public hearing had to be shouldered by a few representatives and activists from the region. Along with villagers, the organizations that made oral and written submission included, Raigarh Zila Bachao Sangharsh Morcha, Jan Chetana, Lok Shakti and Ekta Parishad. These were both highlighting the present issues with the operation of NSIL as well as critically looking at the inadequacies of the EIA for the diversification prepared by EMRTC Consultants.

The NGOs present first sought the cancellation of the meeting, on the grounds that it was held too far away from the site of the proposed expansion. The Sub-Divisional Magistrate (SDM), J. Mohabe, flatly refused the demand for cancellation of the hearing. The SDM was on the panel as a representative of the District Collector (DC), S.K.Raju, who joined the hearing almost three hours after the official time specified in the public notice.

When their first demand was refused, those present pointed out that the operations of NSIL have already in the past been riddled with complaints of legal, environmental and social violations as noted by the government itself. Given these, it would hardly be proper to allow further expansion. A public hearing, they argued, could only be held once the impacts were assessed properly, and given the non-compliance with many of the conditions for NSIL's operations, they asked that the plant itself be shut down until the required conditions were complied with. The SDM, however, did not grant their repeated demands that the hearing be postponed. When the DC arrived hours late, the demands were raised again. It took a further hour to convince him, but eventually, to the relief and appreciation of the majority present at the hearing, the DC finally ordered the cancellation of the hearing. It was announced that the next date of the public hearing would be intimated later.

One would have hoped that when the DC took this decision, he would have done so keeping in mind that a detailed assessment of NSIL's operations would need to be conducted, since this was the demand that led to the hearing being postponed. It is very likely that the assessment would have brought to light the numerous problems with the plant that would warrant legal and administrative action rather than environment clearance for its diversification plans. But this was not to be. Within an hour of the cancellation of the hearing there was talk about the next date of the hearing being set for 20 days later, 24 March 2006. This was confirmed 4-5 days later when published in local newspapers.

What can one read from such swift action in favour of the company? Locals allege that the process is rigged, and that the public hearing is being held not to determine whether clearance should be given, but only to comply with the letter of the law. The clearance itself, they say, has been more or less assured, and there is an inherent bias towards the company among the regulatory authorities. Certainly, the rescheduling of the meeting without the objections raised at the first instance being addressed, raises eyebrows.

Local groups are clear, however, that their concerns must be addressed, and are considering various strategies to counter this most recent development. These range from legal action, to letters and appeals, to ground-level mobilization of local communities. Representatives from Jan Chetana have also written to the DC indicating their disappointment with his decision to schedule the meeting so quickly once again. A submission was also sent to the Ministry of Environment and Forests (the key agency to grant the necessary environment clearance), with copies to the Chhatisgarh Environment Conservation Board (CECB). This is yet another attempt to highlight facts and seek necessary action, from authorities who have chosen to ignore or remain silent so far.

The irony and the tragedy of these developments is contained in the EIA report itself, which the company uses to press its case for being allowed to expand. The EIA claims, "... [the] overall impact of NSIL is likely to be beneficial to the society and environment only if all pollution control and environment conservation measures stipulated by CECB are implemented and efficiently maintained."

PARTICIPATORY PLANNING : The people and their plans
MORE ARTICLES
on similar topics ...
CHHATISGARH