The army would like to point to low morale and push for higher pay. But as far as the troops are concerned, morale may have more to do with the way they are treated by officers, and this is what needs changing, writes Firdaus Ahmed.
17 October 2013 -

The last decade witnessed a spate of suicides and fratricides within the military. The pressures from counter insurgency over the preceding decade and a half were taking their toll. Measures put in place for prevention and response such as the suggestions of the Defence Institute for Psychological Research on the dignity of the soldier, and administrative measures as sending soldiers on their full leave entitlement three times a year, have reduced such incidents.

Not entirely fortuitously, the culmination of the problem and its reporting in the press coincided with the Sixth Pay Commission. The services used the instances as an indicator of low morale, and argued, to good effect, that they needed upward revision of salaries and allowances. The Pay Commission's otherwise controversial recommendations were nevertheless acclaimed for its furthering of the interest of those below officer rank.

This time around the army is beset with the problem of affray within the ranks. Six cases have been reported in the press of fisticuffs between officers and other ranks. The latest is the Meerut incident, involving a Delhi-based unit of a fighting regiment. Earlier incidents too involved combat units - an artillery unit in Nyoma and the armoured unit in Samba.

With the Seventh Pay Commission having been announced recently, the army can be expected to use its problem strategically to influence the outcome. The army has put in place new human resources development policies designed to make up for the deficit in officers numbering 37,509, down about 10,000 from its authorization of 47,916. With a projection of an additional 16,222 officers needed for new formations such as the mountain strike corps, the deficit would be about 25,000 by the end of the decade.

The service will likely make the case that the 'root cause' of the cases of indiscipline is lack of officers in the frontlines. While other measures such as bettering leadership training, by introduction of a leadership course, and using the cadre of 91,000 junior commissioned officers optimally are reportedly in hand, the army will press for the Seventh Pay Commission to deliver not only for the personnel below officer ranks, but more so for officers.

The upshot of the organization using the issue of indiscipline in the ranks for feathering its institutional nest will be the continuing decline of professionalism in the service. Given the prospects of politicization currently staring the military in the face as the right wing forces vie for its tacit endorsement, mediated through the veterans' community, the two coincident and intertwined facets will ensure a degraded military capability by decade end, notwithstanding the armament acquisitions and higher technological thresholds in the pipeline. 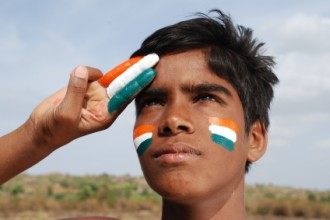 Not only are troops present in officer accommodation in cantonments but, more questionably, are also in their homes with officers' families when the officers are out on field postings.

•  Soldiers in our own images
•  Muslim headcount: Useful uproar

Timely preventive action needs accurate diagnosis and prescription. Most commentary on fracas within the ranks has rightly highlighted that this is due to a narrowing of the socio-economic differential between the soldiers and their officers. The two now come out of the same social classes and are differentiated by an increasingly narrow educational background.

The fact that the notable instances of indiscipline have been in fighting arms suggest that this is because the army attempts to maintain feudal privileges of the officer ranks by using troops to furnish the same. It is apparent that this is increasingly being resented by troops. The same problem has not been reported in technical and supporting arms and services, and this suggests that the relationship between officers and men in these is more work-oriented. This prevents any arbitrary behaviour on the part of officers, no doubt deterred in part by the higher standards of education of those in the other ranks. This is the case also in the air force and the navy, where work relations are work centric and not patriarchal.

The fact is that the Sixth Pay Commission did increase the pay and emoluments. Yet, the pressure on the army to compensate through provision of privileges for its officers has apparently not reduced appreciably. Even if it potentially could have, since the numbers of officers has gone up and inflation in the ranks due to a cadre review has made the army top-heavy over the past decade, those gains have been wiped out.

A cultural change is needed. This is clearly easier said than done since the military does not see itself any more in isolation from society, as a professional island in its cantonments and at remote fronts.

Firstly, the army would not likely reduce its officer privileges since it sees its peer group as the IAS and IPS. A statistic has it that in Maharashtra, 2600 cops work in the homes of the 280 IPS officers in the state. There are seven to ten constables, three to four orderlies, one cook and two or three telephone runners and two drivers each deployed at homes of superintendents and commissioners. Anecdotal evidence suggests that the case with army officers is not very different in kind even if the numbers involved are less odious. Not only are troops present in officer accommodation in cantonments but, more questionably, are also in their homes with officers' families when the officers are out on field postings.

Secondly, the feudal profile of fighting arms owes to the hangover of the martial race theory that has carried on into this century since its birth two centuries back through the regimental system. The recruiting continues to be caste based. For instance, the soldiers in the Sikh Light Infantry unit in question are from the lower castes in Punjab, while those from the Sikh Regiment are from higher castes. Such a recruiting profile leads to preponderance in representation of north Indian communities in the fighting arms. As a result their subcultures are imported into the army along with certain negative features as feudal, non-modern, relationships between those in power and authority and those in the ranks.

The army has closed its ranks against any change to this, even fighting off access to statistics involved, such as in the case of Sachar Committee inquiring after the numbers of the Muslims in the service. It can be expected that the advantaged communities, specifically those within a circle with a 300 km radius from Delhi, and their legions of veterans, will strengthen the army in its reactionary foot dragging. Increasing officer numbers will compound this problem, since the army will target these communities to deliver up more sons. These communities will in turn be more than forthcoming, making a vicious circle.

The problem in the ranks is deeper than the current assessments make it out to be. Cosmetic changes, taken with an eye to impress the Seventh Pay Commission, are in the offing, whereas a more proactive and holistic approach is required.