Surendranath C reports on a power project proposal that threatens to put the Kerala biodiversity hotspot at risk.
01 July 2004 -

Two decades after being declared as a National Park, the Silent Valley forests in Kerala, one of the worlds richest biodiversity hotspots, are looking at a new threat. While environmentalists perceive a grave threat to the pristine Silent Valley ecosystem in the Pathrakkadavu Hydroelectric Project (PHEP) proposed to be built on the Kunthippuzha just outside the boundary of the National Park, the Government of Kerala and the Kerala State Electricity Board (KSEB) argue that the apprehension and the controversy are misplaced and misguided.

The Silent Valley ecosystem comprises of 8,952 hectares of forestland on the Nilgiris plateau closed on all sides by mountains of the Western Ghats, some as high as 2000 metres. It is an ecological island with a relatively undisturbed evolutionary history of at least 50 million years manifested in a high degree of floral and faunal endemism. Rare, endangered and new biological species continue to be discovered from the Silent Valley National Park. 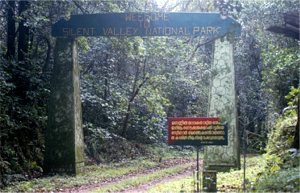 The Pathrakkadavu dam has been proposed as an eco-friendly alternative to the Silent Valley project abandoned following worldwide opposition to the ecocide the project would have caused. PHEP is thus designed as a run-of-the-river project with a small installed capacity of 70 MW in the first phase (105 MW eventually) and an energy generation of 214 million units (Mu) from a 64.5-metre high dam with a minimal gross storage of 0.872 million cubic metres and a negligible submergence of 4.10 ha.

A Rapid Environmental Impact Assessment (EIA) was carried out in just 5 km radius of the dam site and a limited period of five months by Environmental Resources Research Centre at Thiruvananthapuram. According to the report, the total forest area destroyed by PHEP would be 22.16 ha. Compared to 830 ha of tropical evergreen forests that would have been submerged under the original Silent Valley hydroelectric project, abandoned in 1980s, this too could be negligible. Being a run-off-the-river project, PHEP would not cause significant water scarcity downstream, except in an extent of 2.75 km between the dam and the point of confluence of the tailrace water, it is argued by the proponents of the dam.

Merely safeguarding the administrative boundary of the National Park does not guarantee the long-term protection of the ecosystems or the species diversity contained therein.

Despite recommendations by expert committees and scientists such as M S Swaminathan, the boundary of the Park was never expanded and no buffer zone was created.

However, the opposition to PHEP springs from a variety of perspectives  ecological to managerial. The first and the foremost opposition, according to Satish Chandran Nair, ecologist and director, INTACH, Thiruvanananthapuram, is that PHEP posed a major threat to the long-term viability of the National Park, by negating and proposing to sever the ecosystem continuity.

The existing Silent Valley National Park is an artificial administrative unit of just 89 sq. km. of Reserved Forest, its boundaries fixed for legal land ownership reasons in 1914. The natural, ecologically meaningful landscape unit that needed to be protected under the park should have encompassed all the contiguous biodiversity-rich forest tracts in the Nilgiris in Tamilnadu on the west as well as across the ridges and valleys in Kerala on the south of the existing park. The biodiversity value of Silent Valley simply does not mean the value of forests in the 89 sq. km National Park alone excluding the contiguous areas, argues Nair. Merely safeguarding the administrative boundary of the National Park does not guarantee the long-term protection of the ecosystems or the species diversity contained therein.

In 1979 Dr. M.S. Swaminathan, then secretary to the Department of Agriculture, had suggested that 39,000 ha including Silent Valley forests (8952 ha), New Amarambalam Reserve (8,000 ha) and Attappadi Reserve forest (12,000 ha) in Kerala as well as the Kunda forests in Tamilnadu (10,000 ha) should be developed into a National Rainforest Biosphere Reserve, with the aim of preventing erosion of valuable genes from the area. Despite such recommendations by expert committees and scientists, the boundary of the Silent Valley Park was never expanded and no buffer zone was created.

The PHEP project area outside the park too remains an abode of rich biodiversity, a fact that the rapid EIA study report could not conceal. The report found 381 species of flowering plants in the Pathrakkadavu region of which 55 were endemic to Western Ghats and seven rare as per the IUCN category. The EIA also enlisted 23 sp. of mammals, 79 sp. of birds, 22 sp. of reptiles, 14 sp. of amphibians, 18 sp. of fishes (10 sp. not found even in Silent Valley) and 43 species of butterflies in this area. Of these nearly 20 per cent were endemic to Western Ghats.

Nevertheless, this floristic and faunistic survey was quite inadequate, says Dr. Vijayan, Director, Salim Ali Centre for Ornithology (SACON) at Coimbatore. A year-round study or at least a multi-seasonal sampling should have given a more realistic picture. During a trek through the project area on both banks of Kunthi, SACON scientists found nine species of butterflies, one species of reptile and two species of amphibians in just 12 hours. 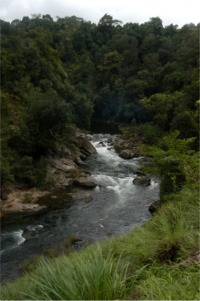 It was based on such a rapid EIA that the project authorities and the Kerala State Pollution Control Board conducted the mandatory public hearing on 21st May. The public hearing turned out to be a fiasco with the local MLA ordering out at the outset all persons except people from the two panchayats of Mannarkkad and Kumaramputhur where the dam and the powerhouse constructions would be sited. This created a commotion as hundreds of eco-activists from all over Kerala had reached the venue to submit their views. Later, all those who tried to oppose the project were booed and heckled and even physically threatened. Those who were not allowed to speak at the hearing included poet and environmentalist Sugathakumari, a key figure in the old Save Silent Valley agitation, and Dr. V.S.Vijayan, an expert on Silent Valley.

The people's representatives of Mannarkkad and Kumaramputhur panchayats where the dam and the powerhouse are to be located said at the hearing that the project would bring much-needed jobs to this remote forest area and mitigate the bleak power supply situation in north Kerala. Eco-activists argue that the project would impact several rare, endangered and even unidentified species. They point out that the PHEP would not only cause drying up of the Kunthi river for a length of 2.5 k.m. but also reduce the flow in its downstream as well as in the Bharathapuzha, the second largest river in the state and the lifeline of millions of people.

Ecological arguments apart, the PHEP have also been questioned on its fundamentals, its capacity to generate the projected amount of electricity. The rainfall data and the river run-off data used in the Detailed Project Report (DPR) do not match with each other and are exaggerated, points out Dr. R.V.G. Menon, Director of Integrated Rural Technology Centre, Palakkad and former president, KSSP. There are also corresponding exaggerations in the runoff in the Kunthi river and also the power generation potential of the project. These distort the cost estimates.

The state electricity utility should have looked at real alternatives before going ahead with PHEP, says Dr. Latha, activists of the Chalakkudi Puzha Samrakshana Samithi (Chalakkudi River Protection Forum). A three percent reduction in the Transmission and Distribution losses would have provided electricity equivalent to the projected generation of PHEP, she argues. Faster completion of incomplete hydroelectric projects in the state, some of which have lagged behind by nearly a quarter century, could have been another alternative. The state also had an identified potential of over 600 MW in small hydro power (SHP) which has not been tapped earnestly. But these arguments continue to be neglected. (Quest Features and Footage)