A death in the family

A single parent also caring for her own aged mother, Hanifa Wani died after months of lying paralysed from a spinal injury - the result of security forces firing on her as she fled in panic. Freny Manecksha reports on a family's suffering amidst the violence around them.
20 June 2011 -

On 25 March this year, 35-year-old Hanifa Begum Wani died at her paternal home in Kreeri, Baramulla, in north Kashmir after eight months of lying paralysed in bed. A single mother, she begged her sisters-in-law during her last painful breaths to take good care of her 11-year-old daughter Humaira. She herself would not be able to keep this promise which she had made.

Hanifa is among the 2000-odd people estimated by civil society organisations to have suffered injuries at the hands of security forces during the turmoil that swept the Valley in 2010. And contrary to some reports in the media, her family insists she was not a protester. Just one of the helpless bystanders caught up in the maelstrom.

Significantly the injuries Hanifa received were above the waist and on her back. According to hospital reports she sustained five bullet injuries that affected her lung, her kidney and most seriously her spinal cord, leaving her a paraplegic.

The people of the picturesque village of Kreeri, which gets its name from a particular thorny bush, are largely dependent on produce of orchards and small floricultural plots. But last year this seemingly tranquil village, like many others in Baramulla, was seriously affected during the summer of discontent. Angry protesters spilled out on the streets and there were several bloody incidents when they were confronted by security forces. An unrelenting strict curfew of over 30 days was imposed, and the people here singled out for some of the harshest measures.

Kreeri's local population was particularly outraged by the disappearance of teenager Farrakh Bukhari on 28 July after the police rounded up some youths during a march. (Farrakh's body was later found dumped outside Choura police station with a mutilated face and body bearing signs of torture.)

Two days after his disappearance there were huge protests. Some reports in the media speak of Hanifa being one of the protesters. But the family, whom I met some weeks ago, insists that she stepped out of her house during the strict curfew not to protest but because of the compulsions of motherhood.

In the house of her mother Raja Begum and in the presence of her brothers Abdullah and Sunaullah Wani, her nephew Ishfaq Wani, recounts the events of 31 July. "Her daughter Humaira was suffering from typhoid and had high fever. Hanifa wanted to take her to the Kreeri district hospital which is just a short distance away. It was calm that morning. There were no protests going on when she stepped out around 9 AM."

The family received an alarming phone call about half an hour later telling them that Hanifa was in the hospital and dead. It was an error, but Hanifa was indeed close to death. 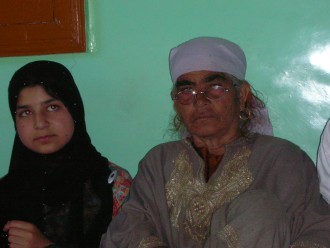 Hanifa's family insists that she stepped out of her house during the strict curfew not to protest but to take her daughter to the hospital. (Picture: Hanifa's daughter and aged mother must now cope with the loss.)

•  Traumatised by violence
•  Memories of protest

What happened during those crucial moments when she stepped out of the house up until the time when she was shot? The shooting took place near the family's hardware shop in the chowk - the fuse box on the pole still bears bullet marks. The events of those life-changing moments have been pieced together from Hanifa's own account, from that of her daughter, and from the local people.

Hanifa was first confronted by three CRPF men who gave her permission to proceed when she explained why she needed to go to the hospital. A little while later she was stopped again, and even as she was pleading with the new lot of troops to let her through, two other personnel came charging down the small lane towards her and Humaira. In fright she turned back and began fleeing, and they opened fire on her. The sound of gunshots brought a few people on to the street, and in the subsequent melee two other youths were also injured.

According to bystanders, after Hanifa fell to the ground, the security men dragged her and attempted to chuck her into the small open drain that runs through the village chowk. Her face distinctly bore the marks of abrasion on her nose, they recall. As the crowds began to swell, the security forces retreated, allowing her to be taken to the hospital while others brought the distraught daughter, who had also been slightly injured, back to her home.

The district hospital provided an ambulance for her to be taken to Sher-I-Kashmir Institute of Medical Sciences (SKIMS) in Soura, Srinagar but the terrifying events of the day were not yet over. The ambulance was stopped near Pattan, according to her brothers who had accompanied her. They were severely beaten by security personnel before the ambulance was allowed to go. At SKIMS Hanifa was rushed to the emergency ward and then to neurosurgery department. The bullet that had lodged near the seventh dorsal vertebrae meant she was paralysed for life and since not much else could be done the family brought her home after eight days.

Recalls Wani, "She regained consciousness two days after she came home. She was trying to speak and was desperate because she could not move her paralysed limbs. She kept asking what had happened to her. The days that followed were no better. She could not eat properly and survived only on liquids or intravenous fluids."

Prolonged conflict in Kashmir has meant the crumbling away of whatever little infrastructure that existed. Expertise in medical facilities like physiotherapy is rare especially in rural areas. There is no question of insurance cover for the kind of injury that Hanifa suffered. Many of her open wounds did not heal, and she had to be taken at least twice a week to SKIMS for treatment in the ambulance provided by the district hospital. "We had to pay for the diesel though," adds Ishfaq.

The family's income had also suffered a serious blow. The brothers, who had been severely injured by the assault on them by security forces were in no condition to function properly for several weeks. The promise of assistance of Rs. 50,000 for treatment of all injured by the state government did not materialise. Abdullah Wani, her brother, says he heard that Rs. 3000 would be sanctioned immediately but even that sum has not been disbursed. Meanwhile the family incurred large expenses in documenting and videographing the necessary evidence.

"The only assistance we received was from the naik tehsildar who sanctioned Rs. 5000 from his own personal funds," says Abdullah.

No member of the civic administration or the state government made a visit to the home. "Even the local MLA made a visit only after critical comments were made in the media about his absence. And after Hanifa's death he did not come to condole my aunt's death, even though he lives barely a kilometer away," says Ishfaq Wani.

Hanifa eventually died after an agonizing seven months. Her ordeal and death affected the family members too. Her aged mother and her young daughter were particularly impacted. Divorced after about a year and a half of marriage, Hanifa left her husband in Sopore and returned to her parental home where Humaira was born. As a single mother she had sworn to be the chief provider for the fatherless girl. "We will give whatever we can to Humaira, but how do we replace a mother's love?" asks Ishfaq.

Ishfaq explains that the mother Raja Begum has an older daughter who suffers from severe diabetes and kidney disorder and she was reconciled to her critical condition. But she never imagined that Hanifa would die first.

The question is met with a long silence. From the window one can see Humaira, by herself, sitting solemnly in one corner of the garden as white, wispy blossoms of the poplar tree whirl and cartwheel in the spring air before they fall on the ground. Ishfaq says she is quiet, and hardly interacts or plays with the other children.

For young Humaira - a young child who witnessed her mother being felled by bullets, and who later had to watch her reduced to a helpless invalid - and the rest of the family, the tragedy continues. There is an acute shortage of professional counselling services to address such trauma. The only thing the family can cling to is the solace of their tightly-knit community. "We have been given tremendous hamdard (a sharing of pain)," they say. But it is no substitute for what they have lost.