In a recent lathi charge on protesting student activists, Kerala's police used electric shock batons. The state's model of development has many votaries worldwide, but the savageness in police actions on mass programmes does not seem to be going away, reports Venugopal P N.
10 November 2004 -

The Kerala Police is coming up with novel methods for dispersing agitating crowds. Last year policemen lobbed a grenade at a group of students who were on hunger strike in front of the secretariat at Thiruvananthapuram. The latest is the use of electrically charged shock batons. Students were the targets this time around also.

Student activists were waving black flags at a visiting minister at the Pariyaram Medical College campus, Kannur on the 18th of October. The police pounced upon the students (in Kerala waving black flags is viewed by the police as a crime of the nth degree) with lathis and when the students fell down, electric shock batons were used. Some of the demonstrators were deprived of their dhotis and shock batons were used at sensitive parts. 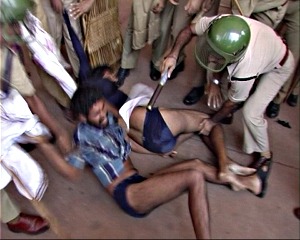 Electric batons in use in Kannur (Pic: Quest)

A big debate has now erupted in the state with human right activists and legal luminaries on the one side and the police on the other. About a year ago there was an allegation that cops were using lathis with embedded nails. At that time the police had neither confirmed nor denied this. Since then, speculation has been rife that even though the shock batons were acquired during the tenure of the former DGP, but he did not press them into service because of a legal restriction.

The Kerala Police Manual is the code for the state's police. The manual has elaborate sections on the methodology and weapons that can be used for quelling a violent and unlawful crowd. Section 240, 241 and 242 deal with teargas, lathi charges and firing respectively. 'Lathi' has been very specifically defined as one made of bamboo. Use of any other implement is unlawful.

However this time, the DGP Mr Hormis Tharakan himself has come out in defense of the new lathis. He claimed that researches had proved that these batons would not cause any lasting injuries. He had experimented with it on his body, the DGP claimed, dubiously comparing lethal blows showered by determined police constables with his own body blow. Further, even though he stated that electric shock batons are used in other countries, he couldnt name them and could quote only the example of the UN peacekeeping force in Kosovo using similar batons.

The private security firm would have been more convincing had its proprietor paraded at least a handful of policemen who would politely wield their lathis very carefully confining themselves to the hands and legs of the victim.  •  A uniform betrayal
•  Rescuing the police force

The manufacturer of the shock batons, an electronic and security system firm has defended their product. But more bizarre arguments were to follow. They claimed that the 9-watt rechargeable cell that produced 350 volt of electricity passed only a microampere current to the victim. It will not be harmful to health if used on hands and legs, the proprietor of the company announced in the press conference. The gentleman would have been more convincing had he paraded at least a handful of policemen who would politely wield their lathis very carefully confining themselves to the hands and legs of the victim.

To cover their bases, the shock producer had come well armed with a doctor for providing expert opinion. And he was a person carrying credibility, being the local IMA (Indian Medical Association) president. Obviously, he too supported the no harm theory, but hastened to add that this is only if used on areas other than those of the sensitive tissues. Again no convincing argument for how the police would wield these lathis carefully, in reality.

In presenting the case the way they did, the defenders may have themselves proved the case against them leaving few in doubt that the police are being armed with a lethal weapon. But more than the harm it could do to the body of the agitator, it is the concept behind the introduction of such devices that is more lethal. Post-independent Kerala had inherited a highly brutalised police force both from its princely states and the British India past. But the shock baton is the symbol of new lows in attitudes within Kerala's police.

Recall that the DGP could quote only the sole example of the UN peacekeeping force in Kosovo. But he misses who the UN forces have been trying to control there. Marauding, violent groups at the throat of each other and against any form of authority. How can waving black-flags at a minister or an agitation for a public cause in a democratic country be equated with the actions of violent mobs of Kosovo?

The logical continuation of this attitude of law enforcement is quite alarming. All mass agitations are to be suppressed in the most ruthless manner. Fear is to be instilled in the minds of the participants, so that they will flinch away at the very sight of the police and the lathi. Technology is advancing fast and so the police force modernise itself with state of the art torture equipment. (The government of Kerala has availed a loan from the Asian Development Bank and one tranche of the loan is for the modernisation of the government programmes including Police.)

The fact that the police defended their action openly and even paraded the manufacturer and a doctor points to a deeper malady. They sincerely think that they are on the right! The core or the think tank of the police seems to genuinely feel that 1) the public is to be repressed as done by an invading army in an enemy land and 2) brutalisation of the police is an absolute necessity and dehumanisation is of no consequences.

Kerala has a plethora of political parties and almost all of them, big and small, have been in power some time or other. Some have openly advocated political control of the police and have actively done so and some have talked of non-interference and been passive about it. But the one thing that does not seem to have changed is the savageness in the police actions on mass programmes.