A canal of misery

The 260-km Sharda Sahayak canal took 32 years to complete, and cost almost 20 times the original estimate. It irrigates only half the area it was supposed to, and has created untold suffering along its path. Puja Awasthi reports.
11 April 2010 -

Babadeen, 70, takes a long drag of his bidi, and offers the secret he says he can no longer contain. "Life is not worth it. Not when there is neither pesticide-free food nor clean water and you are forced to watch your cattle shrivel", he says. Babadeen lives in Pakhanpur, in the heart of one of the country's (and perhaps the world's) most watched political constituencies, Rae Bareli, which routinely sends Congress president Sonia Gandhi to Parliament with record winning margins.

But in his little village with 120 families, there is no sense of this importance. What was supposed to be a life-giving canal has turned Pakhanpur, like 50 or so other villages in two blocks (Harchandpur and Maharajganj) of the district, into either barren territory with infertile and highly alkaline soil or into water logged swamps. Death, disease, deformity, destitution and migration have followed. Pakhanpur lies to the north of the canal and has to contend with seepage while villages sited to the south have turned barren.

Constructed as a link to the Sharda Canal, the Sharda Sahayak canal (260 km long) was approved in 1968 to be constructed at a cost of Rs.69 crores, which had ballooned to Rs.1300 crores by the time it was completed in 2000. The canal draws water from the Sarda river located in Sharda Nagar village of Lakhimpur Khiri. According to the original plan, the canal would cater to 150 blocks in 16 districts of central and eastern UP, through an 8704-km long network of branch, secondary and tertiary canals. These numbers, despite the much higher cost over the years, were not achieved, and the canal ended up irrigating only 48 per cent of the 16.77 lakh hectares it was supposed to.

The Sharda Canal itself has a checkered history. When construction of the canal started over the Sharda river in Banwasa village of Nainital district in 1926, it was to irrigate 20 lakh hectares of land in the districts between the Ganga and the Ghaghra basin. It however ended up only reaching 44.1 percent of that target, with the upper reaches of canal irrigating about 42 per cent and the lower reaches irrigating only 19 per cent of cultivable land due to non availability of water. 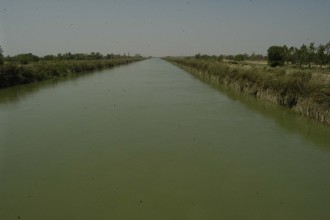 Many mothers had forbidden their children from walking to their primary schools for fear that the children, especially boys, might be tempted to jump into the waters thick with sewage and chemicals for a bout of fun.

•  Where are the canals?
•  Money for nothing

The Sharda Sahayak canal was to be the link to remedy that problem, but instead it turned into another problem itself. A Planning Commission report of May 2007 titled Evaluation Study of the Sarda Sahayak Pariyojna, (see this link) noted that the project "does not appear to have made considerable impact on the household income, ownership, assets and investment profiles of the people." A little later the report remarks that those who live outside the command area of the project have better agricultural and non agricultural profiles than those living within it.

Among the negatives listed in the above report are: water logging, fall in income from livestock from 15 to 5 per cent of total income, 60 per cent drop in use of farmland manure, enhanced use of chemical fertilizers, hormones, pesticides and weedicides, flooding of many acres of land as the channel banks on sodic soil patches get easily eroded, higher levels of outstanding credit and smaller size of average holdings. In addition, though water users' associations were created, these never became truly participatory and the farmers and beneficiraies felt slighted.

Jai Bilas, chief engineer of the Sharda Sahayak canal adds, "The problems are not solely attributable to the canal per se. When water levels fall, farmers construct artificial temporary bunds to block the water and breach the canal banks and outlets for carrying water to the fields."

In Rae Bareli's two afore-mentioned blocks the canal caters to 54,416 people. But it also translates into fields in some villages lying inundated throughout the year while others not receiving a single drop of water due to heavy siltation, increasing soil salinity, walls and homes that crack due to seepage, decline in production of pulses, maize and millets, increased dependency on paddy, migration in search of alternative livelihoods, shrinkage in area for growing green fodder and orchards, water borne diseases, arthritis, loss of vision and the steadily rising menace of blue bulls which weave their way from adjoining districts to find comfort in the swamps created by the canal.

When the men failed to remedy the situation, the women chose to speak, for they were the ones most crazed with worry over weak children plagued by diseases and by those who showed no signs of age-appropriate growth. To them, the canal was the enemy, and many had even forbidden their children from walking to their primary schools for fear that the children, especially boys, might be tempted to jump into the waters thick with sewage and chemicals for a bout of fun.

Organised into self help groups (SHGs) and farmers communities with financial help and advocacy training from the Indian arm of a UK based charity Find Your Feet (FYF) and hand-held by a local NGO named Sabla they chose to do the unthinkable. After letters and applications to the local authorities made no difference, 25 women from various SHGs blocked the road and forced to a stop the cavalcade of Rahul Gandhi, MP from the neighbouring Amethi constituency on 26 June 2006. Vidyawati Devi (50), chairperson of the Aharva Devi SHG of Ghumaiya village handed over to him a two-page appeal attached to a booklet detailing the problems caused by the canal.

The memory of that day still brings a smile to her face. "I was a little scared of the burly security men who surrounded the MP, but was determined to say my two lines. I asked him with folded hands to save us, to save our way of life", she says pointing out that today she is wearing the same pink sari she wore on that special occasion. "During the monsoons the water overflows into our village, so much that the only well begins to spill over. There are seven India Mark hand pumps in the village but just one works. The village headman is not bothered", she shrugs.

Back at Pakhanpur, Babadeen drives home the point with greater force. He hands over a glass of water and commands, "Drink". One does, and spits it out almost at once. This is not water but some stink-raising, foul-tasting concoction that only looks like water. But it is what the village was forced to survive on till the handpumps were not bored.

To one side of the canal, the lands are parched, forcing thousands of families to seek new livelihoods.

After the women's encounter with Rahul Gandhi then Union Minister of Water Resources toured the area and held talks with the state's irrigation minister Merajuddin Ahmed. And though that led to some parts of the canal being cleaned and soil testing of the areas under seepage (a report which the community says has still not been made available to it) the "water" remained the same. On 19 December 2007 the women gave another letter, this one directly into the hands of their MP Sonia Gandhi. In August last year, the central government announced that it would give a special package for the cleaning and desilting of the canal. In February 2010, a figure of Rs.319 crore was finally declared by the Central Ministry of Water Resources.

But the win, says Mata Prasad (50) of Pakhanpur, might well be as delusional as the promised benefits of the canal. "How can we be sure that the money will reach Rae Bareli?" he asks, for though only some 80 kilometres from the state's capital Lucknow, a wide political chasm separates the two districts, as the state government of the Bahujan Samaj Party is decidedly hostile to the Congress.

Savitri Sharma, FYF's Country Director is however hopeful that the announcement of the grant will be a positive beginning. "These were rich soils which yielded the best fruits and vegetables but today they give only misery. The wait has been too long", she says. And in that hope, Babadeen might be tempted to change his philosophy on living on

Puja Awasthi is based in Lucknow and reports on development issues.