Jan Adhikar Yatra, a ten-day long march took place across the state of Jharkhand last month. The yatra was to mobilise people against the growing attacks on their basic rights like employment guarantee, food security, social security, and right to their forest and land. Ankita Aggarwal reports about her experience in the Yatra.

On 3rd October, the fifteen-seater Jan Adhikar Yatra vehicle, brightly decorated with banners arrived at Banjari village in Lohardaga district of Jharkhand. Sitting under a colourful awning in a field, hundreds of people were eagerly waiting for the Yatra team. The team was warmly welcomed by a song sung by members of Mahila Vikas Mandal Kisko, the block-level federation of women’s self-help groups that had organized this meeting. 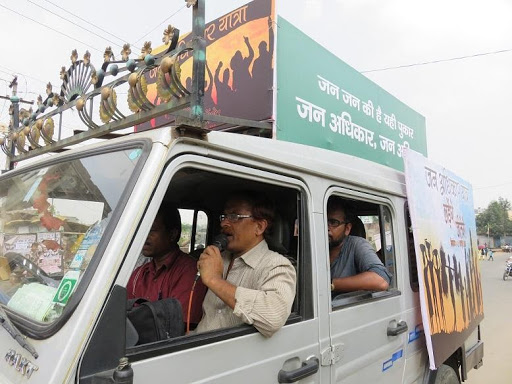 The team talked about the growing attacks on people’s rights to food, employment, social security, forests and land by the government. People listened in rapt attention and later shared about their daily struggles to defend their rights. One woman talked about not getting the full compensation for her land which was acquired for the construction of a nearby dam. About two dozen hands went up when the group was asked whether anyone else was also awaiting payment for acquired land.

This was one of numerous meetings held as part of the ten-day Jan Adhikar Yatra which travelled through villages, forests and hills of Jharkhand from 1 to 10 October to mobilise people against the government’s contempt for their basic rights.

The meetings and rallies saw spirited speeches and people singing, dancing and shouting slogans. At every stop, the Yatra team was lovingly fed by the local people. Apart from accepting their hospitality, the team also requested them to contribute to the cost of fuel, leaflets, sound equipment etc. Copies of a five-rupee booklet with basic information about people’s economic, social and cultural rights sold like hot cakes at every meeting. 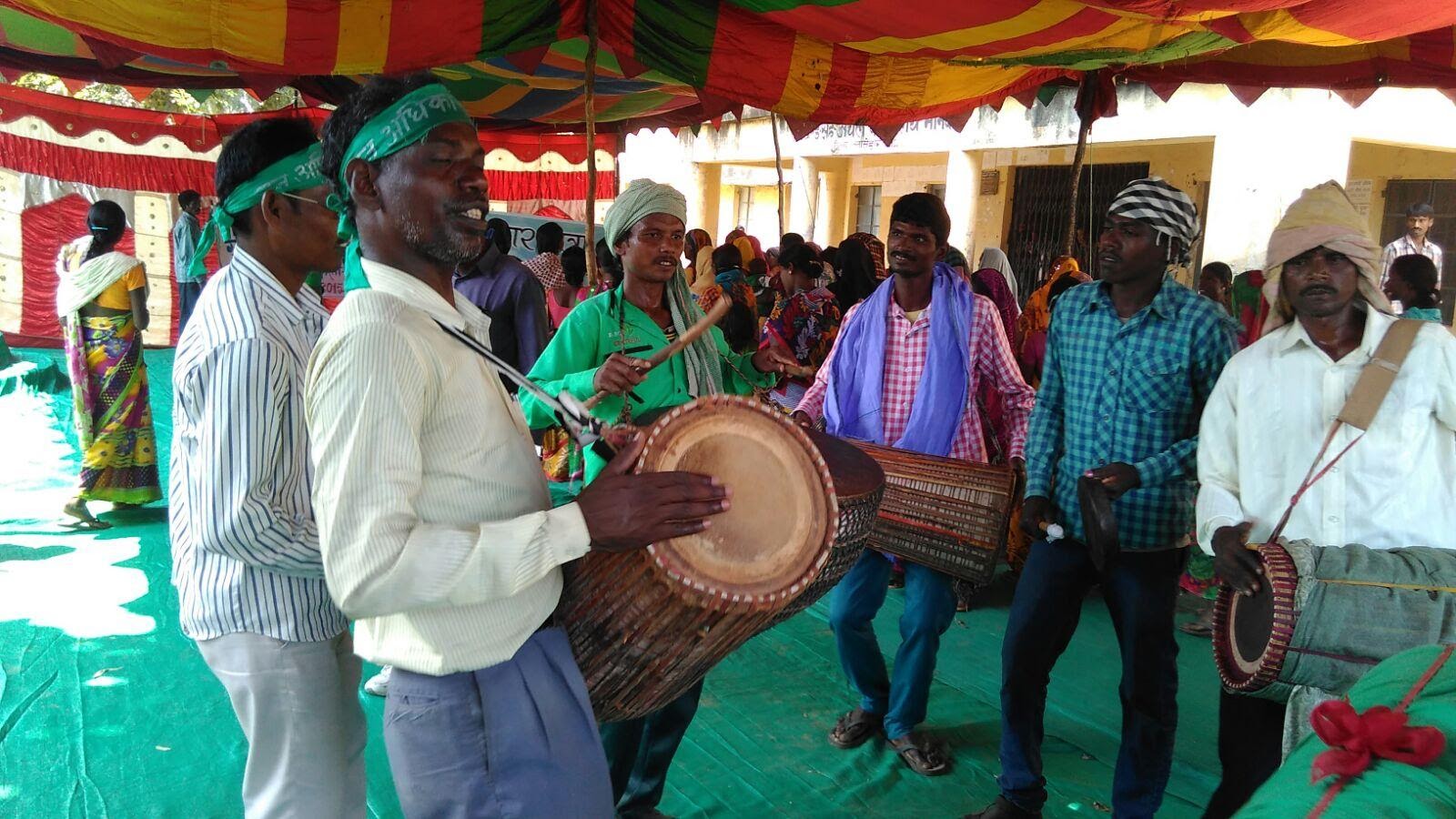 Singing and dancing at the public meeting in Manika (Latehar). Pic: Mithilesh Kumar

Due to the constant undermining of the National Rural Employment Guarantee Act (NREGA) by the central government, the programme is unable to achieve its intended objectives of bringing some economic security in the lives of rural workers, creation of useful assets and strengthening local democracy.

The steep reduction in the budget for NREGA from Rs 40,000 crores in 2010-11 to Rs 38,597 crores in 2014-15 – a fall of about 30 per cent in real terms  - has left states with inadequate funds to provide employment on demand. As per official data, rural households employed under NREGA in Jharkhand during the last financial year received only ten days of work on average.

Although this year Jharkhand has not faced any shortage of funds so far, employment levels are still very low. In village after village the Yatra team heard testimonies of unmet demand for work, that too at a time when the state is reeling under a drought. In many places, workers without an Aadhaar (UID) number are still denied work, a clear violation of Supreme Court orders.

Those who managed to get some NREGA work complained about long delays in wage payments. In Kolodohar village of Garhwa district, workers were still waiting for their wages 18 months after doing the work. The uncertainty about payment of NREGA wages has discouraged many people from working in the programme, despite dire need for employment.

National Food Security Act yet to be rolled out

After repeatedly announcing and missing deadlines for rolling out the National Food Security Act (NFSA) in the state, Jharkhand government finally notified the launch of the Act in September. However, this was a token gesture, as everywhere the Yatra went, people were still waiting for new ration cards. 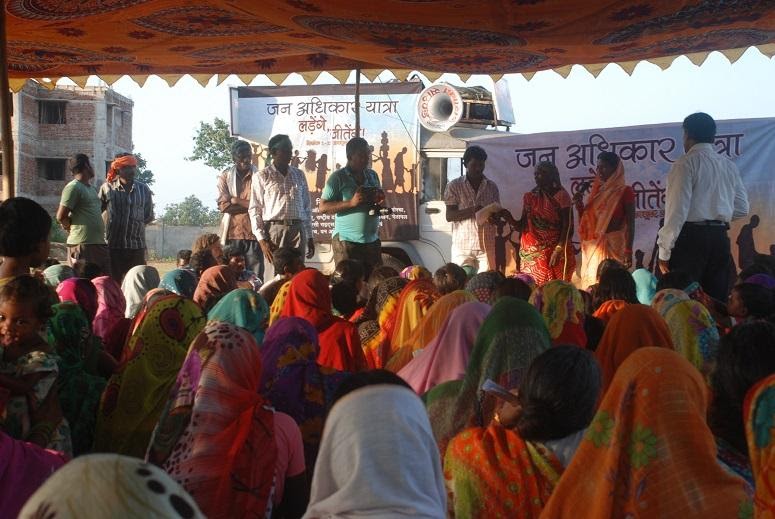 A public meeting in Garhwa where the people present have not received their new ration cards under the National Food Security Act. Pic: Siraj Dutta

The actions of the central government, too, betray a lack of concern for people’s right to food. Instead of upholding the NFSA entitlements of small children, pregnant women and lactating mothers, the central government slashed funds for the Integrated Child Development Services by half in this year’s union budget, expecting states to meet the shortfall. And it has done nothing to provide for maternity benefits of Rs 6000 per child, a legal right of all women under the NFSA.

The Yatra met hundreds of deprived elderly and widows who had applied for a pension but were still waiting for it after months or years. Some had simply been told that the pension quota had been exhausted. The lucky ones who do get a pension have to make do with just Rs 600 a month. Even this paltry amount often fails to reach the pensioners on time. Long delays in pension payments create agonizing uncertainties in their fragile lives. 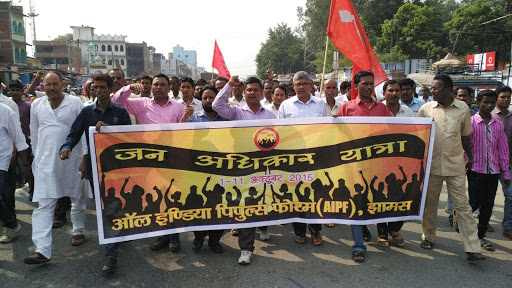 The yatra saw a large turnout of elderly and widows, many of whom do not receive the social security pension. Pic: Siraj Dutta

Since 2006, the central government has been contributing only Rs 200 per month towards social security pensions, that too only for persons belonging to “Below Poverty Line” (BPL) households.

This year’s union budget did not allocate enough funds to enable the Ministry of Rural Development to pay even this amount to existing pensioners. Instead of making social security pensions a universal right and increasing the pension amount to at least half of the minimum wage, the central government is moving towards contributory pension schemes like Pradhan Mantri Atal Pension Yojana, which has few takers among the poor.

Years of injustice meted out to the forest dwellers of Jharkhand could have been reversed to some extent had the Forest Rights Act (FRA) been implemented in its true spirit. The state has given pattas for forest land to only a small fraction of the claimants.

For instance, in Tehri village of the Palamau division people said that of the 100 applications for pattas made under the FRA, only sixteen were accepted. This is a clear violation of the Act as it is the Gram Sabha which is supposed to decide on this matter. Even when pattas are issued, it is often for less than the amount of land claimed. The record of granting community rights over forests is even poorer.

The threat of acquisition of forest land by private companies has increased with constant relaxations of environmental regulations by the environment ministry. The government is keen to lease as much as 40 per cent of “degraded forests” to companies, without considering the implications of this move on the rights of forest dwellers.

At several places through which the Yatra travelled, people were fighting against the acquisition of their land or struggling to get fair compensation. 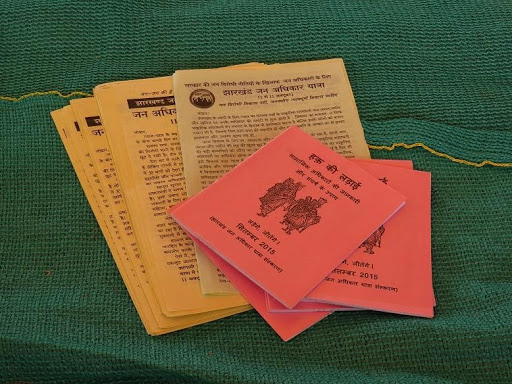 In Khunti, people had earlier resisted land acquisition for the Koel Karo dam and were now trying to prevent construction of the Tajnar dam. In Gumla, a mining company had taken false signatures of the gram sabha to acquire land.

The Yatra reminded people that their rights have been achieved through long struggles and that protecting these rights will require further action. It celebrated the successful protests against the central government’s attempts to dilute the Right to Fair Compensation Act 2013.

In many villages on the Yatra’s route, school children were now getting three eggs a week with their midday meals, a result of the repeated “anda abhiyans” carried out by people of the state. Many recounted their efforts of strict monitoring of ration shops, which got them their full quota of grain.

The Yatra is now over, but people have gone back with a renewed resolve to fight for what is rightfully theirs and demand for more.