The nation as a person

What happens once our self-understanding of India has been permanently transformed by the collective belief that India is a person? Some consequences are obvious; others are subtler, writes Rajesh Kasturirangan.
28 January 2010 -

In several previous articles, I have talked about the mutual influences between individual psychology and collective behaviour. We are simultaneously individual humans and social beings. On the one hand, our collective experience of colonialism makes us extremely prickly in the face of individual criticism by westerners. On the other hand, the individual life stories of upwardly mobile, prosperous Indians are aggregated into a more muscular foreign policy.

Perhaps the single most important symbol of this two-way traffic between individual and collective behaviour is the process of personification, i.e., the explicit understanding of a collective entity as a human individual. We personify collective entities in a range of situations. When someone says "I love Delhi University" he is tacitly making a metaphorical leap from loving other human beings to loving an institution. Personhood is an attractive label for a variety of institutional actors; in 1886, the United States supreme court ruled that corporations are persons for certain legal purposes and on 21 January 2010 the same court extended the 'personal rights' of corporations to the funding of electoral campaigns.

When politicians and lawyers demand and defend communal rights they are making an analogy between a community and an individual. When nations defend their sovereignty they are asking us to see them as individuals. In all these situations, personification is a powerful strategy for importing a range of moral, political and economic intuitions that apply to individual human beings into our evaluation of collectives.

In turn, personification is dependent on the intuition that the personified collective is composed of individuals that can stand for the collective. These individuals can either be representative of the group as a whole, or, at the other extreme, be special people whose personal powers are somehow reflective of the collective entity. When arguing for communal rights, we are making the claim that individuals in the community mostly desire those rights for themselves. At the other end, the sovereignty of a nation is often embodied in the treatment of the head of state and other senior state functionaries. You and I will be tried and convicted if found guilty of a crime in another country, but a diplomat will not. In short, there is a range of individual-collective relations that enable the process of personification.

Personification of the nation-state

A widely prevalent example of personification in the modern world is that of the nation-state. The personification of the nation is based on a range of links between individuals and the nation as a whole: from symbols like flags, sports teams and national airlines to songs and ideological tracts that glorify the personhood of the nation. The Indian national anthem is a perfect example of the imaginative leap from abstract nationhood to personal devotion. We Indians spend enormous energy conceiving of our nation as a person and arguing about perceived slights and injustices done to this national person. External invasions are discussed in the language of violation, with a distinct association of injured femininity with the nation as a whole.

In 'Father of the Nation' and 'Bharat Mata' we have coined phrases that seek to legitimise the bloodline and personhood of modern India. These phrases are designed to evoke a certain emotion in anyone who listens to them. When we talk about communal riots and tensions, we often talk about it in the medical language of hurts and imbalances in an individual body. More recently, when we talk about a resurgent India and emerging superpower status, the language used is reminiscent of descriptions of a person whose time has come. 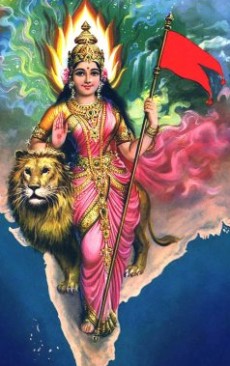 Once a nation-person has been created in our collective imagination, India is easily available as an object of devotion, sacrifice and patriotism.

There are several cognitive and psychological reasons why personification is a valuable and important tool for understanding collectives. Cognitive linguists such as George Lakoff have argued that we conceptualise abstract entities (such as nation-states and corporations) in terms of the human body and its parts; hence the term head of state. Once the 'nation=person' metaphor takes hold, it may even be that the same brain areas are involved when we think about nations and when we think about other people. However, in this essay I am more interested in the consequences of personification. What happens once our self-understanding of India has been permanently transformed by the collective belief that India is a person?

The nation as a person

Some of the consequences are obvious: once a nation-person has been created in our collective imagination, India is easily available as an object of devotion, sacrifice and patriotism. From "Mother India" to "India Shining", popular culture has been constructed around the notion that this country is reliably imagined as a person. The soft power of Bollywood in aiding the process of personification cannot be underestimated. When we stand up for India in international forums or ask for permanent membership of the UN Security Council, we can negotiate for our rights confident that everybody in India and abroad has accepted the Indian nation-person as a living reality.

On the negative side, disease metaphors (such as the cancer of terrorism) have been used to propagate communal and ethnic violence. Internal displacement and state terror after the construction of dams, factories and anti-Maoist operations is justified in terms of the greater good, with the distinct sense of medieval era medical practices; the blood of the patient is let out so that he or she survives to live another day.

A subtler influence of the construction of the nation-person is the intertwining of the moral and the material basis of the nation-state. Human beings are fleshy creatures; we need a concrete hook on which to hang our abstract aspirations. Consequently, questions of equity and fairness are easier to engage with when justice is dispensed by a person rather than an abstract institution like the law. The material and the moral aspects of the nation are the political version of the famous mind-body problem in philosophy.

As the current avatar of the Indian nation got established in 1947 and gained confidence as a unified entity, the body of the nation - its geographical boundaries, its circulatory system (the roads, train lines etc), its brains (the parliament and the government) all gained a coherent identity. This physical coherence of the nation in turn allows moral stances to be taken. The fact that the electoral system has been accepted by most political actors (except, prominently, the separatists in Punjab, Kashmir and the North-East and the Maoists) is a triumph of the moral influence of the nation-person, for our collective trust in electoral democracy is one of those ground rules that allows the nation-state to make material changes to the nation's fabric.

Without that moral trust in the nation-person we would not be able to satisfy our material needs. We are not investing in a gas pipeline from Iran to India via Pakistan because we cannot trust our neighbours. There is no such problem in laying a pipeline that goes from Maharashtra to Uttar Pradesh. The moral status of the nation-person also percolates down to the individual citizen; a citizen who has a sense of grievance can approach the nation-person for justice; in this case, the judge who presides on the case is the material embodiment of the nation-person, performing the same role relative to the litigator as an idol in a temple does for the worshipper.

I believe that the analogy between an idol and the deity on the one hand and the citizen and the state on the other isn't accidental. Theistic traditions have a strong tendency to personify God. It is no surprise that the modern nation state emerged in Christian Western Europe. Crudely speaking, in pre-modern Europe, the combined moral and material authority of the divine person descended in two streams: to the spiritual authority of the pope on one side and to the king as the earthly manifestation of divine power. As Western Europe and North America secularised and democratised, the pope was pushed out of power politics and the king was replaced by the constitution as the ultimate source of temporal power.

India too has strong theistic traditions such as the Bhakti traditions of Hinduism and the Sufi traditions in Islam. The Indian nation owes much to these traditions for its moral legitimacy, as was recognized, among others, by Mahatma Gandhi. However, unlike Western Europe, our theistic traditions are heterogeneous; correspondingly, our intuitions about the nation-person are equally diverse. We should be thankful that Indian intuitions of selfhood and personhood accommodate competing expressions of identity; our psychological as well as political health depends on this experience of diversity in our inner and outer lives.