Instead of imposing top-down controls on behaviour from the Supreme Court downward, would a better solution to our problems be to shift norms from the family outward, asks Rajesh Kasturirangan.

India is a land of great wealth and great poverty. The juxtaposition of riches and deprivation is one of the first things that strike the foreign visitor, or even the Indian who has lived abroad for a while. Our earlier reputation of a land of caste, cows and cobras stems from the perception of these inequalities, which remain despite our transformation into a yet-to-be permanent member of the U N Security Council.

These vast inequalities are moral failures of post-independence India. However, this article is not about such glaring failures but of 'everyday failures,' i.e., our inability to conduct the small things of daily life with a modicum of decency and efficiency.

Consider public sanitation (or the lack of it), which, as we all know, is one of the worst traits of urban India. The stench of open sewage is a familiar smell to most Indians. Even my Bangalore neighbourhood, which is relatively clean and retains some of its traditional charms, has plenty of street corners in which garbage is piled up high. If you thought that poor sanitation is a feature of private neighbourhoods, think again. The Indian Institute of Science campus, which is one of the most prestigious and beautiful academic settings in India if not the world, is full of open garbage dumps. While we often keep our houses spotlessly clean, Indians, from top to bottom, do not seem to care about public cleanliness. The same can be said about our flouting of traffic rules, our tolerance of noise and dust, everyday rudeness, the list goes on. 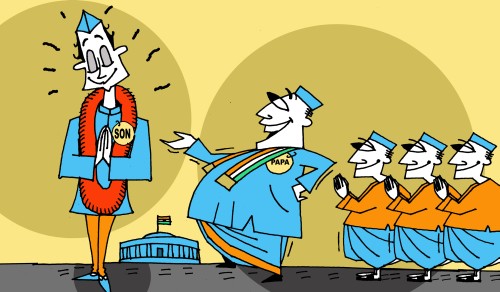 We have personalised public space. From political parties to business houses, we have turned public entities into family endowments. These are not failures of governance alone, they are also cultural failings and while they are not fatal failures - though public sanitation surely causes deadly diseases - I think everyday failures create and sustain the stage for the wholesale flouting of norms. The relation between small scale violation of norms and the large scale criminality is clear in many situations; for example, the culture of small-time corruption in government offices makes it possible for central ministers to steal hundreds of thousands of crores. On the plus side, I think the targeting of small-time violations is less politically fraught than going after mafia dons. How should we start addressing everyday failure?

There are two solutions to creating lasting behavioural change. One is top-down, by creating and enforcing policies that regulate public behaviour. India has any number of enlightened policies, but enforcement is not our strong point. To see a much better implementation of top-down change, look at Singapore - you throw your cigarette on the street and you get fined; you shout against the government and you get caned. India tried policy-driven behaviour change during the emergency, but it was one of the reasons why the emergency failed. For better or worse, top-down behaviour control has failed in this country.

The other option is bottom-up behaviour change, driven by shifting cultural perceptions of what is acceptable and what is not. Bottom-up change is much harder to envision and control, for it involves the desires of many people rather than a small coterie of elites and it involves creating mass appeal for your new norms. Even Gandhi, with his emphasis on cleanliness and his immense popular appeal, was not able to change our attitudes towards public sanitation. Nevertheless, I believe that in the era of cell-phones and social networks, bottom-up shifts in cultural norms are the best means for affecting change.

A bottom-up process must start with a careful analysis of the cultural roots of our public behaviour. The first step, then, is to understand the origins of everyday failure of the kinds I illustrated earlier in this essay. I believe that ultimately, these problems have a psychological origin, coming from the Indian experience of inner and outer space.

As I have mentioned in previous columns, the typical westerner experiences inner space as private, the world of personal choice and the nuclear family, and she experiences outer space as the realm of public, universal rules. In India, inner space and outer space are not demarcated so clearly, and the family plays a major role in easing the slow transition between inner and outer. While there is nothing intrinsically correct about making a strict separation between inner and outer (as in the west) or a gradual transition from inner to outer (in India), we are facing the consequences of the mismatch between the role of the family as a mediating mechanism and the needs of urban life in modern India.

The way we normally understand modern politics, part of being a citizen is to accept the social contract that comes with inhabiting outer spaces, both physical and social. The social contract involves norms governing how we litter, how we treat each other, how we pollute etc. All of these public norms are guides for interaction between complete strangers. When you leave home and enter the road, it is assumed that you will treat everyone equally based on an abstract set of rules that do not distinguish popes from beggars.

In India, we have done the opposite; we have personalised public space. From political parties to business houses, we have turned public entities into family endowments. More generally, by creating gated communities of various kinds, we have created islands of calm and exclusivity amidst deteriorating public infrastructure.

Perhaps it is time to fight fire with fire. You could accuse me of being naively optimistic, but I believe that clean spaces and quiet environments are markers of well-being in all cultures; that Indians will be more than ready to accept the sacrifices needed to create a healthy 'outer' environment if the process is comprehensible to our ways of thinking. If we cannot expect our citizens to abide by an abstract set of rules of public behaviour, why not aim for the opposite, by expanding the family to include all citizens? Instead of imposing top-down controls on behaviour from the Supreme Court downward, I wonder if a better solution to our problems is to shift norms from the family outward.

A couple of years ago, I was travelling in a van with some family members when one of my aunts opened the door of the moving vehicle and threw a plastic bag full of trash onto the road. While I was shocked and asked her somewhat sharply why she did what she did, I still feel guilty that I didn't ask the van to turn around and pick up the litter. Thinking back to it now, I rue the missed opportunity as well - in the close proximity of the Indian familial relationship, rebukes linger longer, offering the possibility of change.

The Indian family environment is a high trust environment; if we can change behaviour at the level of the family it will spread more easily and more sustainably than any number of government programmes. Most of our everyday failures - littering, rudeness, bribes etc - are accepted if not encouraged by our families. I believe that the key to long lasting change lies in the transformation of the Indian family. A citizen's education begins at home.