Neither law nor justice

The health, efficiency, relevance and role of our over-centralised security agencies in an ostensibly federal set up need greater debate. This is all the more important, as the politicians' approach to the nature of violence in the country lacks seriousness, writes K S Subramanian.
25 April 2008 -

The Indian police are, in conception, a centralised paramilitary force modeled on the Irish colonial constabulary. It was initially a provincial police force. However, the British found it necessary, as they went along, to strengthen the police to meet the challenge of a rapidly growing nationalist movement. Even as the Indian National Congress rapidly developed into an all-India organization, the British raised a paramilitary police force (the Crown's Representative Police) as well as an intelligence police agency (the Intelligence Bureau).

Central forces in a federal state

The Intelligence Bureau (IB) was initially a fairly small set-up consisting of police officers for the collection and collation of political intelligence on the nationalist and communist movements. The Hindu-Muslim communal issue came up later. The Crown Representative Police too was a small setup, consisting of only a battalion for use in the then princely states. This has subsequently developed into a very large force after independence and is known as the Central Reserve Police Force (CRPF). The IB and the CRP were initially attached to the Home Department of the government of India, which later became the Ministry of Home Affairs (MHA). Along with the state police and intelligence agencies, the MHA, the IB and the Central Paramilitary Forces (CPFs) have thus become the key political instrumentalities today in India to deal with conflict situations.

Conflict situations in different parts of the country are reported on separately and directly to the government of India by the IB, which has well-spread-out field formations throughout the country working under the Director of the IB (DIB). The IB is a strange beast in the government of India, which functions without a legal framework or a specific charter of duties, a 'secret State' addressing 'national security', which it has defined expansively for itself.

The main targets of intelligence collection by the IB include all opposition parties, and also factions within the ruling party that are opposed to the dominant faction, as began to happen during the Indira Gandhi regime and thereafter. It also includes the communist parties and the different Naxalites who are regarded as a basic national security threat. While the formal theory is that the ruling party must be kept out of intelligence coverage, the Shah Commission of Inquiry exposed this as untrue in reality.

The IB has remained what it used to be under the British except that its masters are now Indians. Stella Rimington, former Director General of British intelligence agency MI5 who has written her memoirs has given an insight into how the agency functions. The lady was not a police officer but a civilian. She started working for the organisation in a small capacity in the sixties while in the British High Commission in India with her husband. She was later on recruited to the organisation on a regular basis and by sheer merit went on to become the DG of the organisation in the early 1990s. Such a thing can never happen in India: a non-police person and, a woman at that, can never hope to reach the top, as Rimington was able to do in the UK.

The Central Paramilitary Forces are recruited and trained by the MHA for deployment anywhere in the country at short notice for law and order management. These are very substantial forces, and may soon number well over a million and a half, costing over one third of the total annual budget of the Union Home Ministry, which is reported to be around Rs.21 billion.

The health, efficiency, relevance and role of these agencies in an ostensibly federal set up need greater debate than has been possible so far. 'Public order' and 'police' are state subjects under the Constitution and it is not clear why the central government needs to raise such a large paramilitary police force to play a supporting role to state governments in maintaining law and order. Increasingly, law and order management in the country is acquiring a centralized character. Increasingly CPFs are also deployed during state and national elections. 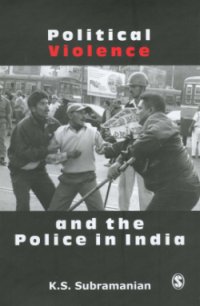 The author's new book, Political Violence and the Police in India, which was published by Sage Publications in October 2007. Material in this article is partially derived with extracts from the book.

Generally speaking, the State swings into action whenever there is a perceived threat to its security, stability and safety emanating from social forces, especially those who organise violently to change the existing order. During such times, the underlying socio-economic issues behind the emergence of such violent movements recedes into the background, although many of them may be resolved within the Constitutional framework.

The government, at the central and provincial levels, is called upon to not only deal with violence in a limited 'law and order' sense, but also to address the underlying causes in a manner as to resolve them on a longer term basis. But in this, the State is constrained severely because the information-providing agencies of the government are basically regulatory agencies manned by policemen, who are neither trained for complex social analysis nor sufficiently detached from group conflict and political affiliations to undertake independent reporting.

The ministry's main sources of official information are the IB and the state governments. However, the information provided by these agencies is often incomplete or self serving or both and cannot be fully relied upon for making detailed statements in Parliament or for adequate comprehension of problems from the policy perspective. Press reports alone, though more informative than government information, cannot be used for informing parliament or in making policy. The ministry needs to develop it own sources of information for policy making.

Realizing this information gap, L P Singh, Union Home Secretary from 1964 to 1971 attempted to set up research and documentation work in the ministry by setting up the Research and Policy Division (R&P Division) in 1967. However, resistance to the move was strong and persistent. As a result, the R&P Division was wound up and was replaced by Policy Planning Division, dealing mainly with 'counter-terrorism'. Apart from being a pale shadow of its predecessor, the work that PPD does is not that of the main Ministry but should be left to the IB.

The recent issue of Maoist violence in Chhattisgarh makes a good case study of the information gap in the MHA. The intelligence reports on the situation in the state are in flagrant contrast to the reports provided by concerned citizens, experienced former civil servants, journalists, human rights activists and others. However, government policy response to the situation in Chhattisgarh and elsewhere appears to be entirely based on classified reports from police intelligence agencies which can never be debated or questioned. This illustrates the information gap in the ministry about which some former home secretaries were concerned. The gap contributes to the crisis of legitimacy of the Indian State.

This is compounded by the non-serious approach to conflicts from poiticians. Consider, for example, the current government. The National Common Minimum Programme adopted by the ruling alliance admitted that the problem of extremist violence and terrorism in many states is at bottom a socio-economic issue and makes a commitment to address the problem more meaningfully than in the past. However, the State policy pursued by the Manmohan Singh government in New Delhi does not live up to this commitment.

While in many instances the CPFs have played a commendable role, they have also often been diverted for prolonged deployment on a variety of duties other than those for which they were raised. This has affected their training and recuperation schedules. It recommends that each paramilitary force should revert to its original role.

The annual report of the MHA for the year 2005-06 makes no reference to the commitment in NCMP with regard to extremist violence in the country. The policies formulated in this report with regard to Naxalite militancy are not markedly different from those of the ousted BJP regime of the past as revealed in the annual report of the ministry for the year 2001-02 during the BJP regime's stay in office.

If the Naxalite militancy in the country is at bottom a socio-economic issue as stated in the NCMP, there was no need for Prime Minister to declare at a meeting of the Standing Committee of chief ministers of Naxalite-affected states that the Naxalite problem constituted the most serious 'national security threat' facing the country, calling for the deployment of over 24 battalions of the CRPF in the affected states in addition to the police forces already at the disposal of the state governments. Nor was there any need to spell out detailed law and order strategy and tactics of the kind spelt out in the MHA's annual report for the year 2005-06. It would have been better to highlight the socio-economic approach while keeping the law and order approach in the background.

It is also worth noting that communal violence poses a much greater threat to 'national security' than Naxalite violence, which the present government, as advised by the National Security Advisor, prioritises. The Congress, like its predecessor BJP, has remained silent on communal violence but waxed eloquent on naxalite violence as a security threat, although the latter is basically symbolic of a development crisis, not one that challenges national security.

Indeed, a focus on equitable development can reduce all violence. Much of the violence in the country has its origins in the failure of the development process to meet the expectations of the people and the imperatives of the Constitution of India. Far from recognising this, instead, the current favoured approach appears to be to raise more and more paramilitary forces to strengthen the muscle of the Indian State in dealing with perceived threats to its stability and security. Given the past record of this approach, it is difficult to imagine how this can produce lasting peace in the coming decades.

Dr K S Subramanian is a former IPS officer (1963-1997) with experience at the Home Ministry. He has also been Director General, State Institute of Public Administration and Rural Development, Government of Tripura. He has also been a consultant for several UN organisations and was a member of the Concerned Citizens' Tribunal on Gujarat, 2002. His book, "Political violence and the police in India" was published by Sage Publications (2007).