By the Maharashtra government's own count, the 14,221 high-breed cows it gave farmers in Vidarbha add just 1.16 litres each to the milk collection in the region. These cows have cost already indebted farmers over Rs.7.5 crore. P Sainath reports.
27 July 2007 -

One year, two 'packages' and many crores of rupees later, each of the 14,000 high-breed cows distributed by the Maharashtra government in Vidarbha is adding just 1.16 litres a day on average to milk collection in the region. The State government's own monthly journal says so.

However, the State sees in this, the success of the relief packages of the Prime Minister and the Chief Minister for that region. The Maharashtra government's journal Lokrajya views it as a vindication of ideas going back to t he days of "Mahatma Jyotiba Phule amd Sant Tukudoji Maharaj". It goes on to say: "These great men's ideas are being translated in the form of the farmers' packages in Vidarbha. In fact, good results are seen".

"Both those great souls - among the nation's foremost reformers - would have been stunned by the claims being made in their names," says Mohan Jadhav, secretary of the Vidharbha Jan Andolan Samiti (VJAS). "Both packages have collapsed months ago. And the cow scheme was the worst part of those. Imagine raising collection by one litre per very costly cow".

The government, though, believes the project has "helped bring back the reign of Bali Raja". (A sacred king of farmers in folklore, in whose time great prosperity prevailed.) It says 14,221 cows have been given to Vidarbha farmers. (Lokrajya July 2007.) Because of this, "milk collection there has risen by 37 per cent". Earlier, it says, "that averaged 44,600 litres daily in these six districts". But with the success of the packages, "there has been an increase of 16,600 litres". Or 1.16 litres a day per new cow.

As a result, says Lokrajya, "the farmers are flush with cash more regularly. Their daily financial problems could be solved. They do not need to wait for their crops to grow".

Giving quality cows to thousands of poor farmers in the six most troubled districts of the region was a high profile element in the relief packages of both Maharashtra Chief Minister Vilasrao Deshmukh and Prime Minister Manmohan Singh. The first aimed to bring 40,000 new cows to the region in three years. The second, 18,000 in the same period. Close to two million people in these six districts are officially recorded as living "under maximum distress". Another five million are "under medium distress". And there have been - in the State's own count - well over 2,000 farm suicides since 2001. (The real figure is much higher.) 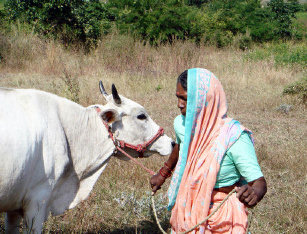 At the time the 'packages' were announced, the scheme had been attacked as "insane" by Planning Commission members and farm activists alike. (TheHindu, July 14, 2006). It gave costly cows to poor farmers in drought-hit regions without water and fodder. Besides, the beneficiaries had to fork out quite a bit for cows they did not want. (TheHindu, November 23, 2006). Many complained that the animals had been forced on them and were eating more than "our entire families". Kamlabai Gudhe's cow in Lonsawla village of Wardha district cost Rs.17,500. Of this, she had to pay Rs.5,500 and the government the rest. Within weeks, Kamlabai tried hard to give it away to neighbours who did not want it either. "It was too costly to feed it," she says.

The 14,221 cows have cost already indebted farmers over Rs.7.5 crore. And that does not include the cost of maintaining them. Which could range from Rs.85 to Rs.150 a day depending on who you are and what you can afford. So maintaining these cows would cost Vidarbha's bankrupt farmers over Rs.50 crore a year. For 1.16 litres more a day, that is a lot of money. (If fully carried out, the State and Centre will together have spent Rs.165 crore on the scheme in three years.) "This must be the costliest per litre milk collection rate in the world," says Mohan Jadhav of the VJAS.

"It takes Rs.45 a day to keep that creature alive," says Vijay Jawandia, the region's leading thinker on agriculture. "So on an increase of one litre, the farmer loses Rs.30 a day in the added cost this cow brings". Senior officials in Amravati insist that total collection might be much higher. "They could be selling more to private buyers," says one. But there are no figures to show this.

"The '103 per cent increase"'in Yavatmal brings its daily collection to 6,100 litres. "That's still a fifth of what it was two decades ago".

•  Till the cows come home
•  Politics of relief packages
•  Give us a price, not a package

The State, though, is pleased with the scheme's progress. Washim district, says Lokrajya, has seen "an increase of 328 per cent in milk collection". Not impressive, since its earlier figure was just 700 litres a day. (Now it is 2300 litres daily.) There are single villages in Western Maharashtra that outdo this entire district. Also the "103 per cent increase" in Yavatmal brings its daily collection to 6,100 litres. "That's still a fifth of what it was two decades ago," says Dada Rhode, a leading milk contractor. Also, he says, a lot of milk from Andhra Pradesh is being sold in Yavatmal. So private collection cannot be much better,

"People do not keep cows because there is no fodder and no water. Nothing in the packages has changed that," says Mr. Jawandia. "There was no real promotion of jowar, which would have brought the fodder. In any case, the farmer gets at best Rs.9 per litre of milk on average. Which is Rs.3 less than what a bottle of Bisleri water sells at. When there is no higher income, what sense does it make?"

The State's Dairy Development, Fisheries and Animal Husbandry Minister, however, finds that "a transformation has begun". The impact of these programmes, Anees Ahmed told Lokrajya, "can be seen in the fact th at in the last few days the number of suicides has reduced". (Shortly thereafter, Vidarbha saw 28 of them in a week.)

The cow programme, though, will not suffer. The Minister promises the State will increase the money it spends per cow to Rs.20,000. "In that way, the financial burden (on the farmer) will be reduced". What's more, "in order to increase their [farmers'] awareness, we are going to have Chetna Dindis". (That is, awareness or consciousness-raising rallies and campaigns.) Vidarbha's march to progress is unstoppable.