Rewarding violators with room for expansion

Unmindful of evidence that Nalwa Sponge Iron Limited had started civil works for its expansion without environmental clearance, officials rush through a public hearing to review the new project. An operation that is already violating regulations is given the merit of due process for its expansion under the same law, notes Kanchi Kohli.
03 April 2006 -

Sometimes one wonders if laws exist only to be broken. This refrain is surely true when it comes to centrepiece of India's environmental law, the Environment Impact Assessment Notification (EIA), 1994, issued under the Environmental Protection Act. Examples abound of its clauses being subject to complete and well-planned disregard, with the help of public officials.

"One could make out that people were really pained by the state of affairs. Their speeches in local language Chhattisgarhi spoke about their suffering at the hand of NSIL."

The story of the Nalwa Sponge Iron Limited (NSIL) is one ridden with those realities. On 16 March 2006, I reported on India Together that the Raigarh District Collector Dr S K Raju cancelled a public hearing scheduled on 3 March 2006 to review NSIL's diversification plan in Chhatisgarh under strong public protest. (See:No public, no hearing)

Raju took an encouraging step to cancel the scheduled hearing and the plan was to reorganise the public hearing for another date. This was primarily in response to two points raised on 3 March, at Ghargoda:

1. The inability of the affected people to participate in the hearing as it was held in Ghargoda which is 20 kilometres away from Taraimal where the Sponge Iron Plant is located.

2. The operation of the Nalwa Sponge Iron plant is ridden with illegalities and non-compliance of conditions laid out by the Chhattisgarh Environment Conservation Board (CECB). Apart from mandatory compliance of conditions laid out in the Air and Water Acts, the violations include illegal encroachment of forest land, drawing of ground water without permission and so on.

But to the utter disappointment of local communities, the DC set the new date of the hearing soon after the cancelled one, on 24 March 2006. Villagers felt this was done under pressure by the DC and that too without giving any real chance of finding out extent of pollution and legal violations in NSIL's operation. Soon after, local NGOs Jan Chetana and Raigarh Zila Bachao Sangharsh Morcha wrote to the DC and Ministry of Environment and Forests (MoEF) asking them to consider the facts, schedule a detailed enquiry and not organize a hearing for the project, so quickly, on 24 March. Banjari Temple at Taraimal, 2 km away from NSIL plant, was chosen as the venue.

Police presence at the Public Hearing on the 24th. Pic: Jan Chetana.

Ironically, while the written correspondence was carried out, the preparation for the rescheduled hearing continued.

Meanwhile, Jan Chetana filed an application in Bilaspur High Court seeking a stay on the public hearing. The court rejected at its first hearing on 21 March 2006. A copy of the High Court's order is yet to be received, so it is not clear what the exact grounds were.

But a day before the hearing there was a sudden ray of hope. Local activists were able to locate a show-cause letter sent by the Raigarh-based Regional Environment Conservation Board to the Director of NSIL. The letter was dated 22 March 2006 and referred to an inspection by representatives of the board on 13 March 2006. RECB is the district level pollution watchdog for Raigarh. The CECB operates for the entire state and is based in Raipur.

The letter states that during the inspection it was found that civil works for the expansion of the project had already been undertaken without seeking environmental clearance. It referred to the construction for the Rolling Mill and power plant which were components of the NSIL diversification/expansion project for which the 3 March public hearing was originally organised. The letter also quoted the EIA Notification, 1994 to point out that, no construction work, preliminary or otherwise in relation to setting of the project may be undertaken till the environment and/or site clearance is obtained.

Based on the above facts, the Regional Officer, R K Sharma, had sought an explanation from NSIL as to why no action should be taken against them under the Environment Protection Act. Also, a copy of this letter was marked to the DC.

This letter was immediately released to the press by the local groups. They also resent this letter to the DC, requesting him not go ahead with the 24 March public hearing in the light of these facts. A project which is already violating the EIA notification could not possibly merit a public hearing for its expansion under the same law. 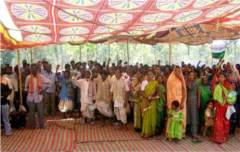 But that was not meant to be. The public hearing was held despite stiff protest. Ramesh Agrawal of Jan Chetana who was present at the hearing, said that the issue raised in the (R K Sharma) letter was also brought to light during the hearing. "But the DC said that these two are different issues. The DC said that the public hearing could go ahead as planned and alongside, the points raised in the letter will be responded to," said Agrawal.

Such is the reality of the implementation of the principle law for grant of environment clearance in the country. Blatant and publicly recorded violations are not put down and the violators penalised; instead the violators are rewarded with a second public hearing to push through their expansion plans.

The hearing saw some vibrant and strong objections to the project, noted Agrawal, adding that the DC gave an opportunity to many villagers to raise their points. "One could make out that people were really pained by the state of affairs. Their speeches in local language Chhattisgarhi spoke about their suffering at the hand of NSIL," he said. Agrawal also noted that there were 'supporters' brought to the hearing by the NSIL people as well, and that the DC did not allow for any question-answers to take place with the panel members. "We could only raise our points and that's it," he said.

Significantly, and as noted in the earlier India Together article, the EIA for the expansion project, used as the basis for environment clearance, is itself far from adequate. In fact, the very first observation at the hearing was a critique of the EIA by Dr K Babu Rao, a scientist from Hyderabad. He questioned the intentions of the project proponents and the EIA writer, EMRTC Consultants Private Limited. He said, "Very first impression on reading through the report is: 'Here is yet another EIA report done to fulfill a formality.' It suffers from the general maladies of cut and paste, language errors and missing required information." He then criticized the lacunae in the baseline data, water consumption, impact assessment, risk analysis, environment management plan and so on.

The next step in the clearance process is the compilation of the objections and suggestions from the public hearing and forwarding of this to the MoEF, which is the Impact Assessment Agency. It is most likely that the project will be referred to the Expert Committee on Industrial Projects. (See that committee's composition).

Letters seeking intervention have been sent by Jan Chetana to the expert committee Chairperson Dr T S Vijayaraghavan, and officials in the MoEF. Only time will tell if this will be yet another failed attempt to uphold a law, which despite gradual dilutions, still provides a space for public intervention. The situation is now so bleak that if yet another project is granted environmental clearance despite violations, it no longer comes as a surprise.

Kanchi Kohli is based in New Delhi and a member of the Kalpavriksh Environmental Action Group. She attended the 3 March 2006 "hearing".