They lock on to the NREGA

The complaints are many and often justified. People are sometimes exasperated by the way the National Rural Employment Guarantee Scheme works. But there is unanimity on its worth and value, writes P Sainath.
31 May 2008 -

But age has not stopped Gadasu Ramulu from doing hard physical labour in searing temperatures well above 43 degrees Celsius in Nalgonda. There have been nearly 60 heat wave deaths here in two months, the highest for any district in Andhra Pradesh this year. His passbook shows he has worked 39 days at the National Rural Employment Guarantee Act site since such work began at his village of Tatikolu. At the other end of the age spectrum are many in their early teens trying to pass off as adults in order to get some work and help out their families.

Hunger and rising prices are driving the old and the very young to the work. In this time of crisis, "NREG work" is their lifeline.

Gadasu Ramulu thinks it's a good programme. "It should be there," he says. His wife Anjamma insists: "Listen, it's essential. We won't eat without it."

Then why does the record show he only worked three days at the site in the past 10 days or so? "Look at me," he says. "This is hard work and it is very hot. So typically I work four days and rest four days. I cannot do it continuously for a week. Sometimes I find other work that might pay less but is lighter. I'd like to do both, actually. In truth, you do what you get - and what you can manage physically." 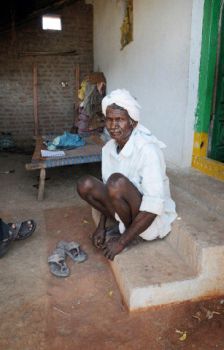 His household includes a daughter - and her children -abandoned by her husband. All the adults do "whatever work we can find." Including Anjamma who is past 65.

"He's burning the energy he has," she says of Ramulu. "Which is bad when we are eating less. But what is the option? That's why he has to take a break every few days."

The family does not have an Antyodaya card (that is meant for the poorest of the poor) that would make their food cheaper. At the NREG site he can make "up to Rs. 80 a day." In the lean times, that makes the difference between "something and nothing." She adds: "Without it, we'd be in far more trouble."

More than three million people have found some work at NREG sites across Andhra Pradesh. Nobody here calls it by that name, though. It's nooru rojula pani (a hundred days' work), or "government work."

Here, in Devarkonda mandal, the average daily wage at such sites is around Rs. 84. It is possible, though not easy, to get private work that is higher-paid than that, on some days. As a neighbour puts it, applying an old Telugu saying: "Rather than running to drink milk, better to stand still and drink water."

It might seem an odd analogy, since the work that she, Ramulu and others do at the NREG site can be, and is, very heavy. "But at least it's there," she says.

Across several worksites in the districts of Nalgonda and Mahbubnagar are others who are well into their sixties, actively seeking such work. We also ran into at least three others close to Ramulu's age returning to labour in order to eat. Being malnourished makes the work that much harder.

Things are bad at home, too. "All the children here go without milk," says Anasuya in Tatikolu. "This year, with the costs shooting up, the chance doesn't arise of their having it." Her husband is the field assistant at the local NREG site.

"At least 40 children have had to be turned away from the work site," says her neighbour in this Dalit colony. "Families are terribly hungry. Yes, the rice at Rs. 2 a kg is there for some, but it has only just come in." And milk which was around Rs. 12 a litre is now between Rs. 16-18 a litre. "And those with bigger families, or widows with orphans, are having a bad time of it. Some days, people borrow money to buy food." Often, girls of 12 or 13 wear sarees and try to appear more mature than they are, in order to get work.

"What can people do?" asks Lakshmamma, a widow herself. She gets work now and then at the site. "My job is to pour water over the spot to be dug to make it less hard."

More than three million people have found some work at NREG sites across Andhra Pradesh.

Young Damodar, who first tapped NREG work when he was 15, dropped out of school after his father died. He goes to work on some days with his mother. "A widow has to be accompanied by someone," she says. "Otherwise, getting work can be difficult."

Villagers complain that the work they get is often too hard. "Try digging for hours in this heat." And the price rise is making things a lot worse with people being hungry and eating less.

"What we're doing is going downwards in steps," says Krishnaiah. "First, people change the type of food and go in for poorer quality which is cheaper. They move to the cheapest vegetables, then no vegetables at all. Then they give up milk. That's how the changes come." Amongst the changes is that older people, particularly older widows, get much less to eat within the household.

Krishnaiah is among the more fit and fortunate ones, who also goes out to do stone-breaking work at a higher rate of wages at private sites. "But that doesn't come always and it is even harder to do. The stones are terribly hot. The tools also get very hot. Your feet are burning all the time."

That, say the others, is the case with all of them. "We work to meet our hunger, but we burn up the food we eat with that work."

The complaints are many and often justified. People are sometimes exasperated by the way the NREGA system works. But there is unanimity on its worth and value. It's hard to find a single poor person here who says the programme is of no use, that it ought to be wound up.

"It keeps us going," says Gadasu Ramulu. "What's more, it's right here, in our village. We need this."

BACK TO SCHOOL : Meaningful restart of education is critical
MORE ARTICLES
on similar topics ...
ANDHRA PRADESH