Death of an activist

Niyamat Ansari fearlessly sought to secure for people their rights under the law. The political economy around the delivery of those rights, however, proved too vicious, and he was killed. Simrin Makhija reports.
21 April 2011 -

Niyamat Ansari was a man who never blinked in the face of danger. He fought tirelessly for the rights of workers under the National Rural Employment Guarantee Scheme (NREGS) and for forest dwellers under the Forest Rights Act. It was as if he was on a mission - to ensure that poor and disenfranchised citizens of India got what the law provided for them rightfully. He worked on empowering people by spreading awareness about their rights. Niyamat along with other local activists like Bhukhan, Shyama and Pachati have fearlessly exposed numerous cases of fraud in NREGA over the last few years.

I had the opportunity to work with Niyamat, Bhukhan, Shyama, Pachati and James (an activist from Palamau) in August last year. In the summer of 2010, along with student volunteers from Delhi University and elsewhere they documented a number of cases of delayed wage payments under NREGS in Manika block (Latehar district of Jharkhand). They had filed for compensation for delayed wages under Schedule II, Rule 30 of the NREG Act, 2005 and Section 15 of Payment of Wages Act 1936. The POWA states that a worker whose wages are pending is entitled to compensation up to Rs.3000 but not less than Rs.1500.

My job was to help them ensure the workers got the compensation due to them. Working with the team in Manika was an enriching experience. They had meticulously organised all the required documents and had taken every measure possible to ensure that compensation payments were only sanctioned to genuine workers. It was thanks to their dedication and hard work that the Assistant Labour Commissioner sanctioned compensation up to Rs.2000 each to 92 workers. 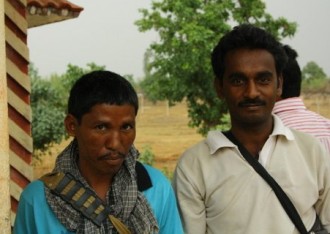 Bhukhan Singh and Niyamat Ansari from Manika (Latehar). Niyamat was killed on 2 March for exposing a case of rampant corruption in which the post office was also involved. Bhukhan survived that night, but continues to receive threats.

•  Law turned on its head

Niyamat's knowledge of the law, his understanding of the people of Latehar and his dedication and ability to overcome obstacles that came his way made him the man Manika will never forget. His continuous fight for people's rights brought him in the line of fire of corrupt local contractors. Niyamat's activism threatened a powerful nexus of corrupt contractors and other criminal elements active in that area. Earlier in October 2008, an attempt had been made on his life, when he narrowly escaped a gang of armed goons. Nothing stopped Niyamat. His crusade continued.

On 2 March 2011, ten armed men went to Bhukhan's residence in search of him. Luckily for Bhukhan, he was not home at the time. Niyamat wasn't so lucky. The armed men went to his house and took him with them under the pretence of 'questioning'. Hours later an unconscious Niyamat was carried to Manika thana, from there he was taken to Latehar Sadar Hospital. Unfortunately, Niyamat did not survive the beating.

The next day his sister filed an FIR naming eight people in the murder of her brother. Now all but one of the accused have surrendered and are in judicial custody.

What is most unfortunate is that this is the fate of Indians who care about the state of this country, and actually do something about it. Another shocking fact: Niyamat had made a desperate plea to the government for help only days before he died, however it fell on deaf ears.

What I fail to understand is why Niyamat had to suffer for trying to make the government do its job. Why could the government not be bothered to protect Niyamat when he reached out for help? Why doies it not have the gumption to punish his murderers?

Niyamat is not the first to be murdered for demanding rights under the law. On 14 May 2008, Lalit Mehta was murdered for revealing irregularities in NREGS through a social audit in Palamau. Less than a month later, Kameshwar Yadav of Giridih was shot dead by unidentified gunmen for exposing scams in NREGS. In July 2010, RTI activist Amit Jethwa was killed for filing petitions against the forest department and a PIL against illegal mining in Gir forest. Dr. Binayak Sen was sentenced to life imprisonment on count of "sedition" because he exercised his right to free speech. Is this the reward for speaking up in the world's largest democracy?

For every step forward we government take with legislation like NREGA and the RTI Act, we take three steps back by turning a blind eye to incidents like Niyamat's murder and imprisoning activists like Binayak Sen. How far we have fallen from the inspiration days of Independence.

Heroes, each of them

Having spent my childhood in Mumbai and my college days in Delhi, the realities of rural India were unknown to me. Urban notions of how government schemes work in rural areas are quite different from the real story.

Living in Ranchi, I travelled 4 times a week to Khunti where I was working at a help centre for NREGA workers. Working on a compensation case in Khunti, I realised how difficult it is to get what is rightfully yours according to the law. A year prior to my arrival in Khunti, the centre had begun work on these compensation cases. Despite having all the required documents in place, it took over a month of hounding district and state officials and being passed around various offices like a parcel at a 5-year-old's birthday party to get the workers the compensation that was rightfully due to them.

Khunti has recently been a hotspot of Naxal activity, yet one feels safe there. The same cannot be said for Latehar. Just the stories I had heard about the Maoists and middlemen were enough to send shivers down my spine. Fellow passengers on the Ranchi-Latehar bus were rather concerned for me, "Mumbai se akeli ladki Latehar ja rahi hai? Hai ram!" Latehar is not a safe place, and not just for a lone girl. Even Niyamat, who has relentlessly worked for the betterment of Latehar could be killed by its own people.

An area where the middlemen reign almighty requires men of mettle who will combat them. Niyamat and Bhukhan have been that for Latehar. Today Niyamat is no more and Bhukhan's life is in danger. Heroes like Niyamat should be supported and celebrated, not ignored and left in the hands of local predators.