The rural employment guarantee programme is life-saving. This time round, the poor have slightly more money than they did earlier. But all prices are up. P Sainath reports.
13 July 2008 -

Kondapur is deserted. It usually is, in the month of May. This village in Mahbubnagar district of Telangana falls in the belt known for some of the highest levels of migration in south India each year. This time, though, the people of Kondapur are not too far off. They're repairing a nearby tank. The National Rural Employment Guarantee Act (NREGA) is helping to keep people at work in their own villages.

There has been a steep fall in distress migration from Kondapur. "There are over 200 of us at this site alone," says D. Ramulamma, one of the workers here. "Last year, all of us were out of the district. Most were outside the State."

It's a small but significant statistic. There are now 28 bus services a week leaving this district in Telangana for Mumbai. Three to five years ago, that number was 42 to 45 a week. That's a sharp fall in the number of bus trips carting migrants from Mahbubnagar to Mumbai.

In many of those years, you'd have found most of Kondapur on the buses. And other villages, too. This correspondent did, in 2003, boarding one of them that year. (see The bus to Mumbai). The bus to Mumbai was their route to survival. A hope of work and income in the off-agriculture seasons.

This is one of the most backward districts of Andhra Pradesh. With a population of over 35 lakh, seasonal migrations of up to five lakh were considered 'normal.' There were years - like 2003 - when fully a third of that population had migrated in desperate search of work.

V. Chittiamma now earns in a week almost what she made in a month as a migrant just three years ago. She can bring in up to Rs. 90 a day here, or Rs. 630 in seven days. "In Madhya Pradesh, where I used to go for work, I got a maximum of Rs. 700 a month." Sometimes less.

"I used to go to Kadapa and Kurnool then," says V. Bharatamma. "And worked for a pittance of Rs. 25 to 30 a day. Now we don't have to leave our children behind. Nor take them with us on long, tiring and unhealthy journeys."

Hunger far from over

In 2003, the district was dotted with "gruel centres," set up by political or charitable groups, trying to meet the acute hunger that haunted Andhra Pradesh that season. Mahbubnagar and Anantapur districts alone had over 200 of these makeshift public kitchens. In one place, this correspondent recorded the presence of even sarpanchas in the long and hungry queues lining up for gruel. There was one centre right here in Kondapur, set up by a group of journalists. ("Hi-tech, low nutrition," The Hindu Sunday Magazine, June 22, 2003.) But the centres no longer exist.

Every family speaks of eating less. But since they do not have to travel far, they escape the many costs tied up with migration.

The problem of hunger is far from over, though. Rising prices have driven several people in their sixties (and one above 70) to work at this site. But this time round, the families have slightly more money than they did earlier. "Food costs are just terrible," says Bharatamma. "All prices are up, even of gold," mocks a friend of hers, to a chorus of protests: "We can't buy food, let alone gold for marriages. When did you start looking at gold prices?"

Every family speaks of eating less. But since they do not have to travel far, they escape the many costs tied up with migration. "We're not spending on travel, and with some income we can manage food better in our own village." However, the fall in food intake is serious and tells painfully on their bodies. And health costs are hurting them badly, too. Hundreds of poorly nourished people labour at these sites in temperatures above 43 degrees Celsius.

The impact of the NREG on migrations is equally vivid in Lambapur in Nalgonda district. "Over 300 people here are getting work," says Lashkar in this adivasi village of P.A. Palli mandal. "We used to journey to Guntur or Miryalaguda, or dozens of other places," he says.

School attendance has gone up. "We had to take the little ones when we went away for up to three months. Now they go to school." 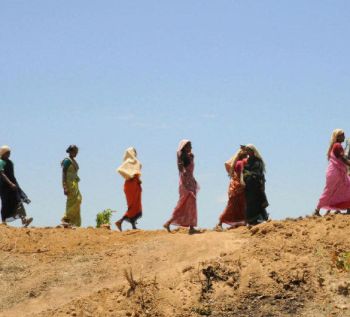 NREG work has seen migration levels fall sharply in Kondapur. Just three years ago, there were 40 to 45 bus services a week to Mumbai from Mahbubnagar district. This year the number is down to 28. (Picture by P Sainath)

Or did, till the summer vacation. Like in most 'tandas' (adivasi colonies) the state of schooling and literacy remains pretty dismal. But the Lambadas feel there has been a relative improvement. And as in many tandas, the records of everything - schooling, NREG work, all of it - are a total and complete mess. Yet the evidence is simple and compelling. Two years ago, most houses in Nambapur would have been deserted.

They, too, have complaints about the high prices of food. "Now the shopkeeper says, 'you are earning nearly Rs. 100, you can pay more,'" laughs one Lambada. "But seriously, what they are giving with one hand they remove with the other. Something has to be done about these food prices." With milk costs rising, children in many households do not drink it at all. The NREG work is hard and the heat is killing. Local media have reported close to 60 heat wave deaths in Nalgonda in two months, the highest for any district in Andhra Pradesh. But the Lambadas still rate their work conditions as better than in past years.

In Vadlaparthi village of the same district, too, NREG work has curbed migrations. "Over 70 people from our S.C. colony have got work. All were migrants last year," says B. Devaiah. He thinks the nooru rojula pani (or a 'hundred days of work' as the NREG is called in these parts) is "life-saving." Where most families migrated to diverse destinations just three years ago, "there are almost none who have left this year."

Back in Kondapur, Bharatamma has this take on the NREG: "This work, these wages - and better food prices, why can't we have it all? I'm sure the government can do it if it wants to."