Lalgarh: Deprived of a peace of life

Not many trace their way back to the human tragedy that has given rise to the culture of violence that marks Lalgarh today. The women do not appear scared of any police reaction in response to their protests. Soma Mitra has more.
13 August 2009 -

Lalgarh (WFS) - Once a decrepit block of West Bengal, Lalgarh in West Midnapore district has turned into a battlefield. Over the last few months, hundreds of women have taken to the streets shouting slogans as they march in processions of protest.

Why has this happened? Why have ordinary women found it necessary to pick up arms? At one level, Lalgarh is a turf war between the Communist Party India (Marxist), the People's Committee Against Police Atrocities (PCPA) and the insurgent Maoists. At another, it is also about a troubled community fighting for survival and the simple necessities of life, such as potable water and education for their children. 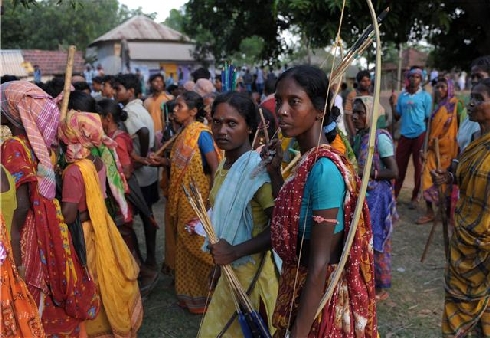 The women of Lalgarh have been compelled to take to violence simply to draw attention to their unmet rights. Pic: Soma Mitra/WFS.

"We are deprived of clean drinking water, we are deprived of proper schools and, frankly speaking, the government has done nothing for us. We have no other way but to revolt against the government," says Shashi Murmu, 28, of Mulapara village. Her mother, Tara, 51, who has also taken up arms, adds, "For a long while, we have been deprived of everything. We have decided that from now we will fight the government." There are about 600 families at Mulapara in the Shalboni block of East Midnapore district where the Jindal Special Economic Zone (SEZ) is slated to come up. And almost all the families there highlight the same woes as Shashi and Tara.

Surprisingly, the women do not appear scared of any police reaction that their protests may invite. Police atrocity is nothing new for the villagers of these areas, who state that the police indiscriminately pick up villagers whenever there is a Maoist attack. In fact, the men who flee from the villages as soon as combined operations are announced and the women are left to face the wrath of the security forces. While the police claim that they do not generally pick up women for interrogation, people here have no recourse should they find themselves treated harshly and unjustly. They don't have access to legal support, for instance.

Police atrocity is nothing new for the villagers of these areas, who say that the police indiscriminately pick up villagers whenever there is a Maoist attack.

•  Disturbed in Manipur
•  Women of steel

Government agencies were shaken once images of women with arms began flooding the media recently. Some weeks ago, the state government decided to send a six-member delegation to assess the actual situation on the ground. The experience of this delegation was a major eye-opener. "I was shocked to see many are yet to get ration cards. People who should rightly have been enlisted as Below the Poverty Line (BPL) are listed as Above Poverty Line (APL)," R D Meena, Secretary, Backward Classes Welfare, a delegate, is reported to have said.

Says Gouri Mahato of Domahani village, "The panchayat (village council) had assured my family of job cards under the National Rural Employment Guarantee Act (NREGA) scheme two years ago but that has not happened till date." The NREGA provides a legal guarantee for 100 days of employment in every financial year to adult members of any rural household willing to do public work-related unskilled manual work for a statutory minimum wage.

Gouri's family had five bighas (One bigha = 0.4 hectare) of land. But the family was forced to sell it off when her mother fell critically ill. The mother had to be taken to a Kolkata hospital for treatment as the Lalgarh health centre had no doctor on duty. So a job card means a great deal to Gouri's family.

But, perhaps, Gouri, with no job card, is better off than Krishna Halder, who was issued a job card under NREGA two years ago. Even though Krishna was lucky enough to have the prized card, she had been issued only 14 days of work over the last two years. In a world where Krishna has to struggle to make ends meet for her family, her job card did not help. The daily struggle of life took its toll on the family. Krishna saw her son joining the PCPA and later on the Maoists before being taken into police custody.

Earlier these villages of West Midnapore district were the stronghold of the CPI(M). However, despite numerous promises and 33 years of Left rule, Lalgarh has yet to get a proper irrigation system and, in the absence of other necessary infrastructure, a large section of people here are still dependent on forest produce for their livelihood.

Take the case of Mohua Baskey, who goes into the forest every day at about five in the morning to collect 'kendu pata' (leaves used to roll tobacco to make indigenous cigarettes or 'beedis'). Her 14-year-old daughter accompanies her on this daily two kilometre walk to the forest to supplement the family's meagre income. The early morning toil and subsequent trip to the market only result in a meager Rs.15 to Rs.20 each day, for their family of four.

One can't help wondering why Mohua is not getting her daughter educated. "There is a school in our locality. Besides, if I allow my daughter to go to school our income would be reduced by half," says Mohua in the matter-of-fact manner. Ironically, every year the government sanctions millions for developmental projects in these backward areas of the state but the fund remains unutilised.

For instance, in the last financial year, Rs.5,000 million was sanctioned for the development of Paschimanchal (western range of the state) Development Affairs. This area is largely under the control of the Maoists and includes parts of West Midnapore, Bankura and Purulia. Only Rs 350 million of this amount has been used till date, according to the state's budget statement of 2009-10.

The people of Lalgarh are heavily dependent on the Public Distribution System (PDS) for their daily nourishment and the government is required to make available PDS supplies of foodgrain at reasonable prices to consumers. But corruption has brought the local PDS system to the verge of collapse.

Take the case of the around 400 families in Gopalpur village, all of whom have ration cards. As these families are listed as BPL they are supposed to get 25 kilograms of rice at a rate of Rs.2.50 a month. However, villagers complain that ration dealers say they are entitled to only 10 kilograms of rice a month. Furthermore, it is said that the ration dealers have not returned to the villagers their ration cards. Hunger now has begun to stalk their lives: Mayarani Hul, 62, of village Amlasoli, recently lost her only son to malnutrition.

Not many perceive the human tragedy that has given rise to the culture of violence that marks Lalgarh today. Even women, who have never been in the forefront of such agitations, have now taken to violence simply to draw attention to the violation of their rights as citizens of this country. (Women's Feature Service)

Soma Mitra is freelance journalist based in Kolkata.