A conniving chain of regulators, police, and contractors is profiteering upon the backs of gruelling labour by migrants. Jaideep Hardikar reports on the exploitation.
01 June 2004 -

Dashrath Suna is a very busy man these days. His two-storied house stands out amid the cramped huts of Katabanji, a small town in Bolangir, Orissa. From a poor migrant of the 80s, Suna amazingly grew richer, and richer, in the past decade or so. Having grasped the tricks of the ugly labour market while once toiling hard to excruciating physical limits, he now trades himself in western Orissa's biggest industry - labour.

Oddly, in this no-industrial belt, known for poverty and deprivation, migration of people is a big business, which runs into crores of rupees. People like Dashrath Suna make a lot of money from it, while poor migrants run into greater depths of despair every year. The more the number of migrants, more is the money earned by these agents. Suna knows what he does is blatantly illegal and inhuman, but in this business, even otherwise, no laws apply. 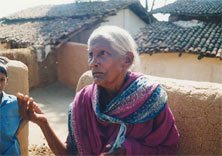 Picture: An old woman grapples for two square meals in a village in Nuapada, Orissa, after a labour contractor coaxed her son into migrating to Andhra Pradesh with his wife and children for work. She's desperate, and hungry.

Sardars, the middlemen or labour contractors, emerged as a new set of usurers when the rural credit folded in early nineties. Their job is simple: They coax the poor people and farmers of these poorest areas of the country into migrating for work to other states where the rich industrialists, brick-kiln owners or road contractors savour the cheap but skilled labour. It's a mutual need. The industrialists outside need cheap labourers. And, the gullible farmers or the landless labourers here need work round the year.

"We send the labour to many parts of the country," says Abdul Kadar aka Babloo Khan. Kadar has been sending hordes of farmers for work since past two decades. Today, he says, it is enough. Exploitation is taking an ugly turn these days. From women being forced into prostitution to migrants being served with highly adulterated food, it's all happening out there, he laments these days. The deals, he says, are struck in Orissa, but the labourers have to work in other states. The labour machinery of a host state can't act against the contractors since the deals are struck in Orissa.

Moreover, these labourers don't qualify as migrants under the Inter-State Migrant Workmen's (Regulation of Employment & Conditions of Service) Act of 1979, since they migrate on their own volition. "The labour contractors are making a mockery of laws," laments Kadar.

While Dashrath Suna refused to speak to this reporter, Kadar was more than willing to speak about this ugly trade. "The labour contractors would not speak to you because they know what they are doing is illegal," explains Kadar. But a local tells me that Kadar is a transformed man today because he believes that God has taught him a lesson for all his sins  his young son lost both his legs a year ago in a ghastly accident.

Without delving deep into the reasons for larger-scale distress migration from the Kalahandi-Bolangir-Koraput belt, Kadar explains that the Sardars lay a trap for villagers just before the Nua-Khai festival, shortly after the harvest. That is the time when people desperately need hard cash for household chores, and to purchase good food and clothes. Sardars give them advances ranging from Rs.2,000 to Rs.7,000, and book them for the next six months.

With a dropping rate of rural employment in this region, villagers who are reeling under abject poverty and drought of policies accept these deals unhesitatingly without realising that these advances are nothing but a binding form of loans. These loans force the small farmers and the landless to migrate to the places these Sardars would drive them to shortly after the harvest season. This money is later deducted with a heavy interest from the earnings of migrants at their new destination.

Kadar says: "One family can save up to Rs.7,000 to Rs.10,000 after six months of grueling work." But what a Sardar could earn sitting at home on these migrants in six months could be mind-boggling. "Just calculate," Kadar quips. On one 'Pathri' - a unit of three persons a 'Seth' invests Rs.30 lakhs towards material costs of brick at their kilns. A 'Pathri' makes on an average three lakh bricks in the span of six months. On every thousand bricks, the unit earns Rs.70 to Rs.111 depending upon the city you are in. On every thousand bricks made by this unit, a Sardar gets his commission of Rs 10. So, per Pathri, an agent earns on an average Rs.3,000 for a season. 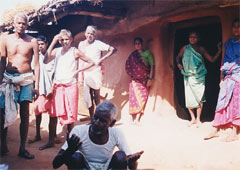 Picture: Villagers of Katabanji, near Bolangir, speak about the paucity of work and abject poverty - and drought of policies - that force them to move out of their villages in distress. Something that the agents love to capitulate on, to earn a handsome commission.

"This year, I've sent around 30,000 people to many brick kilns in Andhra Pradesh, Raipur, Maharashtra and as far away as Ayodhya. That is about 10,000 Pathris," discloses Kadar. Simply put: He'll earn a commission to the tune of - hold your breath - Rs 3 crore! People like Suna earn even more because they pack more migrants to new places of work. The Seth on the other hand benefits too. The cost of labour he pays to the migrants comes to just about one per cent of the total investment in raw material cost. A Sardar's commission is deducted from the wages of the labourers on a weekly basis.

Kadar says a long chain of people waits for its share in his commission. The local police, the Railway Police Force, the office of labour commissioner, and many more high profile officials get their kickbacks from these Sardars. "There's a good incentive for them to keep quiet," he chuckles. "We have license to send people for work outside, but that does not permit us to send so many of them on such meagre daily wages," he explains. Who says there's no industry in this belt? "Come here," Kadar says, "and I'll show you Orissa's biggest cheap-labour industry!"